Red Wing Constellation Worth it?

Hey guys - anyone with the Red Wing Constellation able to chime in and give some feedback?

Is the plane worth it’s price in its current state do you think?
I see it had an update a month ago with automated flight engineers, does that work well?
I have the PMDG DC-6 and love it: top class textures and flight characteristics. How does the constellation compare in terms of textures?

I like it a lot, but it isn’t at the DC6 level. The problem with the DC6 is that it is so good, everything else has a hard time matching it. If you are a fan of this era of aircraft then I would say go for it, but keep your expectations in check. I think the small 4 man team at Red Wing have done a great job so far. 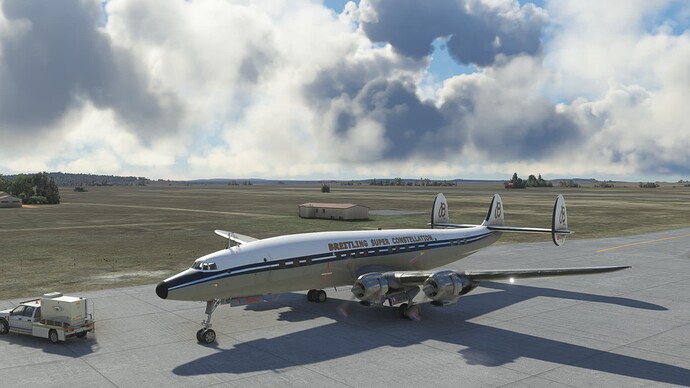 welp i already caved and got it.

It seems off to a good start but, you’re right. I’m spoiled with the DC-6 which is a complete work of art. I’m a stickler for masterfully well-done textures, reflections, pbr, polys, etc and this is definitely one of its weaker points atm.

Though I’m staying hopeful because this is on their STAGE III bucket list:
3D OUTSIDE REWORKED
3D INSIDE REWORKED

So here’s to hoping they upgrade their game to the near-PMDG level!

I hope you enjoy flying it. I’m a big fan of the aircraft of this era, so of course I have (and love) the DC6. If the question was 'should I buy the DC6 or the Connie, the answer is of course the DC6…but if you can have both…

Always up for supporting ambitious devs during beta builds…assuming they actually follow through with completing a high quality product. For the price of this one, it they better

I bought it When it released and flew it for 15 minutes and haven’t touched it since. That’s not to say I think it’s bad, I invested in the future of the project. The Dc-6 is one of my favorite addons and I hope this can prove to be a worthy competitor.

I bought the plane a few months ago as an Investment for the future, when RedWings will increase the price.
At the moment the DC-6 is far better, but when RedWing complete their stages i think the Connie can be an awesome plane.

I would say definitely worth it, the ai FE is working great and now it cane be flown as a semi arcade plane with not too difficult takeoff and approach phases

I’ve also taken the plunge on the Connie. Completely agree that it isn’t on par with the DC-6 in the present state. However, it deserves some credit that the small team seems to aim higher than PMDG featurewise: different cockpit layouts (in English and French for Air France), smoke on engine start, engine fires with smoke, puncture on hard landings, weather radar, evacuation life rafts as well as emergency procedures with voices and alarms.
Will we see all this working, and when?
Time will tell. I’ve chipped in to encourage the project.

By the way, if you use Stream Deck I’ve shared a wip profile to control the AIFE checklists and power setting on Redwings discord server.

That’s what stops me from buying it. They want DC-6 level prices for something clearly not up there yet, and then say as they bring it up to that level the price will go up even higher.

The DC6 is a gift at the price they set it at. As I mentioned before…if it is a choice of one vs the other then definitely you should get the DC6… but if you already have the DC6 and also have an interest in the Connie, then I think it is absolutely worth the asking price.

For what it concerns me, amd remembering the A2A Connie, this RedWing is a big disappointment; textures awful and (at least in my case), it doesn’t work, Smoke from the engines after the last update and, after some minute, the speed decreases.
Fulvio

for this I think I can answer your question.

Smoke from the engine at start up and it disappears afterwards which seems reasonable for the engine in those days (Not sure though). but for speed decreases, try to look at the engine RPM, in those planes you can’t use only the throttle to control thrust, you need to control propeller pitch as well as the fuel mix to achieve proper thrust level at the green range of engine RPM.

If you keep in the max redline RPM you will overload the engine real quick and when it fails you have speed decrease as the engine shuts down.

tbh before the auto flight engineer was implemented in the last update I can’t actually fly it even in external cam, too much to tinker at take off and landing times (developer mentioned you will need 3 sets of throttle levels to control all those). I would suggest you to try check the automated flight engineer in the clipboard so it takes over the fuel mix and propeller pitch and bind keys for propeller pitch (I use the slider on the thrustmaster TCA sidestick for that) to fine tune the thrust level desired.

it is for sure a lot more complex than flying FBW A32NX and more so when compared to the Asobo default planes. I would not say it’s study level or going near study level for full system depth (as I have no idea on how complicated it should really be), but there was a reason why there was a dedicated flight engineer with all those array of gauges and levers everywhere back in the days, think of it as how do you drive a manual transmission car without synchronizer where even changing gear need to carefully rev match the engine.