Does the $20 Reno Air Races package come with four different aircraft types (one T-6 Texan, one P-51, one Aero L-39 Albatros, and one Pitts Special) or does it come with 4 liveries of same (chosen) aircraft such as four P-51 or four Pitts, etc?

The $20 version comes with the 4 different aircraft with 1 livery & interior of those aircraft. The bigger package includes lots more liveries, cockpit variations & other minor exterior differences. 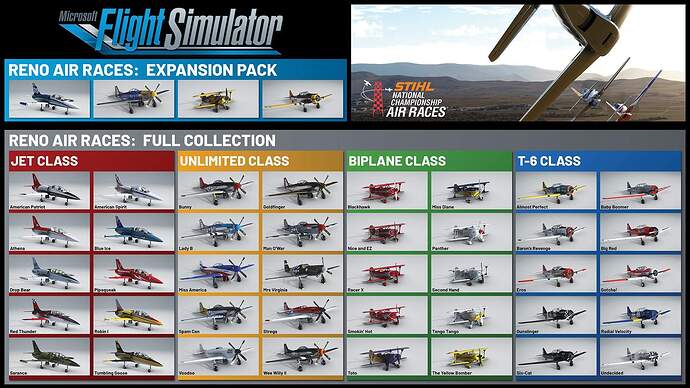 I am trying hard not to buy the full expansion but some of those livery are just awesome.

Which Texan and P51 variant liveries are in the 20$ expansion?

Look at the picture two posts above. The first four planes are in the basic

marketplace is down for me

Strangely, they omitted the names on the four liveries in the basic pack… oops I guess?!

Each aircraft type also contains a “base” version, think of it as a factory fresh variant of each of the models. The “base” versions are fictional liveries.

So I guess I could buy individual liveries/variants of the 60$ ones but dont need to buy expansion pack base ones?

The names listed are from real planes named from their pilots. Very cool to have as well.

Ah, that explains the lack of names, thanks. Pity they’re fictional but I suppose there’s some sense in that since they’ll be the most common ones in the skies.

Can a staff member please confirm the expansion pack aircraft are the four stock aircraft?
Thanks.

I assume these aircraft are then usable throughout FS2020? Not a bad price for four payware aircraft, but I am reading that Reno is arcade, so are the aircraft fully functional throughout the simulator?

Which ‘cockpits’ do the aircraft have in the basic $20 dollar version? I’m interested to see what you get in the package.

I assume these aircraft are then usable throughout FS2020?

Yeah thats the good deal here. Even if you don’t like the air races you’ve got the aircraft to play with.

I was under the impression that the Reno air races airshow scenery appeared at Reno but sadly not.

The Pitts is the same one you get for free in GOTY, so you’re really getting 3 planes in the Reno pack.

But the air racing looks like it has potential, Reno Stead looks good - crowds and displays when you’re in a race, and no crowds in the regular game. Someone needs to dig into the SDK and recreate all the old Red Bull Air Race circuits - there were loads of those…

Does anyone know just how long the special sale prices are going to last? It’s annoying how there’s no sale end date that I can see for anything Xbox marketplace