I haven’t bought this myself yet. Just thought some would like this opinion since it feels like a fairly well balanced one.
Review: FlyInside Bell 47-G2
By Stuart McGregor

I am half way through this review. I have no idea how to fly a helicopter, so this could be interesting for me.

As a helicopter fan for years all I can say is that it´s a very nice helicopter. It comes with 3 difficulty levels adjustable via its external application (similar to AirlandFS realism setting) and also governor (manual or auto). Medium preset with governor enabled is a quite good balance as realistic one may be too unstable if you are not used to all helicoter dynamics. Anyway you will need to make tons of corrections with the stick and pedals when using it and anticipate to the inertia to avoid overcorrecting, so be patient till you get used to it. It´s a challange without any doubts.

In the following video you can see how stick is being used by instructor constantly while camera is focused on the student view, but he is doing just small corrections all the time, specially while hovering. This will give you an idea about how it´s the real thing: 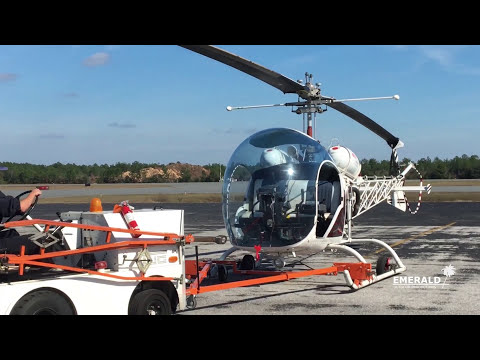 Remember this is an old school one, so there´s no trim, no piloting aids and no avionics. It´s all visual and it´s just you and the physics. The physics for a piston helicopter like this one are quite hard to handle compared to other modern ones like the Airbus H145 but you can do it anyway and there´s ground effect as well. Very important: don´t overstress engine (monitor manifold gauge) or engine will fail. The cockpit view is so clear and wide that you will love low level VFR. That´s one of its clear pros.

Yeah…Just did my first flight in this thing. Very sensitive AC. You don’t have to move very far with your stick to get it to go crazy.
Other than the flight control being very touchy it’s a pretty nice AC. I have to say though that it’s look and textures are more akin to an Xplane AC. It is definitely on the lower end of the spectrum in that department.
I’m sure that it will be great after I get my stick and axis’ all set up the way I want them. Was worth the money.

The best livery is the updated MASH livery. I hope it’s possible they update their other liveries to have the slightly worn/restored look too.

This addon is probably the most challenging and engaging thing I’ve done in MSFS in the past year. Landing warbirds doesn’t even come close. I find it rewarding and satisfying that I can watch real life helicopter training school videos and apply those same techniques to this simulation.

Thus far, I’ve only had to adjust the helicopter and tail sensitivity 5-10% for stability and down to 60% cyclic sensitivity. Following the real life instructors online, I have been able to learn to taxi, takeoff, and land under control. As soon as I achieve enough muscle memory control coordination, I’ll try full realistic settings again. I’m enjoying the experience of the addon and the different perspective of the MSFS scenery.

Hi, how can I assign a button to the governor switch?

Thanks for this. I was on the fence with regards to buying a Fly Inside product after getting burned by their flight simulator on Steam. An unfinished, then abandoned, product that they charged full price for. Live and learn I guess.
I used to build collectives for DCS till I got bored with it. Now with helicopters hitting MSFS I may have to start up again.

There doesn’t seem to be any collective control. Burned again by a half-baked product? Fool me twice, shame on me…

I look forward to the reviews once you’ve had an opportunity to peruse the 24 page manual - about half of which are screenshots.

No collective control? I must be misunderstanding your post.

I bought this fairly soon after posting this thread.
The manual is not very complex. There really is not much to the controls at all. The in game app is done extremely well. The modelling is gorgeous. I don’t have a realistic control set up for helicopters so can only use this with the governor on.

My only gripe is that the yaw isn’t done well at all. When you rotate the chopper and release the yaw control, it springs back to the original orientation. I doubt this would happen normally.

The collective is an axis that changes the pitch of the main rotor. There doesn’t seem to be an event to bind for it. I will have to look in the manual. If there is not a bind for it, then they should have bound it to one of the prop pitch axis that are already in the game.

Edit: The last page of section 3 might hold my answer. It seems the collective needs to be bound to throttle and rpm to pitch. It’s backwards, but I’ll give it a try in little while and report back.

You bind it to the throttle axis. (Or throttle 1).

That was it. Took a good 3 minutes to get it into a stable ground effects hover. Just can’t fly a helicopter without a collective. Definitely a different bird than the DCS UH-1H.
Unfortunate that we can’t save axis sensitivity to individual aircraft yet. Hopefully that’s somewhere on Asobo’s to-do list.

But how is this helicopter flown? Every heli has a collective - does it climb or sink by changing the main rotor rpm?

It is a misunderstanding in semantics.

Most flight sim enthusiasts have and use a controller called a “throttle”. The “throttle” lever control is what is identified in several helicopter sims and specifically with the 47G as the collective (the primary control that is moved). The throttle is then a secondary defined axis or rotary axis on a PC “throttle” controller device.

For Example (Using a Logitech X-56 as a reference):

If and when Milviz releases their UH-1 Huey, I will invest in new dedicated and proper helicopter controls. I have conceded to using the governor option with the 47G addon, as my Warthog doesn’t have a rotary that is conducive to simultaneous collective and throttle adjustments. I’m also too lazy to swap it out to my X-56 just to fly the 47G every once in while.

However, I still thoroughly enjoy the FlyInside Bell 47G.

I have a DIY collective, modded my Saitek pedals with bearings and a lighter return spring, and lightened the return spring and extended the grip of my TW:WH. This heli rocks. Almost makes me forgive Dan for abandoning the Steam FlyInside simulator. Now if he just comes clean and admits it…
Flying this reminds me of watching the WOCs learning how to fly the TH-55 at Rucker. I’m about 6 hours in and am getting the hang of it (no governor).

Perhaps you could try again, as I have successfully mapped a switch on my TM WH throttle to engage and disengage the governor, using the “Toggle Anti-Ice” mapping in MSFS. I use the spring loaded ‘ENG OPER IGN R’ switch and I push it forward to toggle the state of the governor switch on the collective.