The rivers in Costa Rica are shown like huge blue lines, and you see those lines from 10 NM or more…and that is very unrealistic. 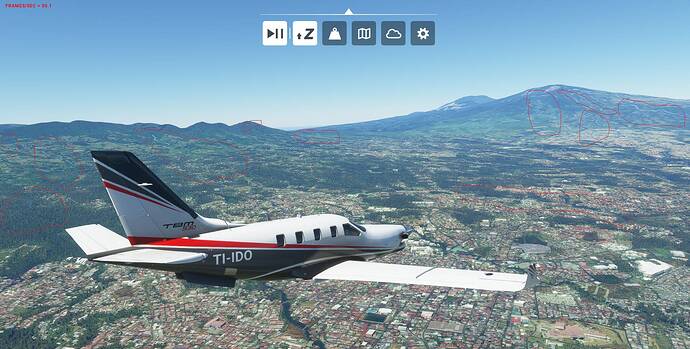 How can i change those rivers?

I don’t think you can change them. Something Asobo needs to do. Maybe in a world update someday.

Can you post some photos from your real life flights over the same area? Just for comparison.

You can see the Central Valley in this video…from 0:20 min to 0:45 min, and there is no “water”…only trees and buildings.

The next video is taken by drone, 1000ft over ground in San Jose City, look mountains around, and any blue water river:

Maybe an Openstreetmap error? It seems to have lot of rivers. https://osm.org/go/YHQLfN

Maybe they were wrongly tagged as river, but they are streams?

Here there are a lot of rivers and streams…but my concern is about the rivers wide and distance shown, because in MSFS you can see those rivers from 10 NM or more, and they are really wide, but in real world the wide is only few feet or even you can’t see the water - in sometimes are covered with trees -.

That issue is not present for example in another countries in Central America, like Nicaragua or El Salvador.

Rivers look terrible all over the world now. Something happened at the time of the UK world update. Before that, they looked fine, but after they look terrible in so many places.

So many rivers look like someone painted them on with a marker pen. They have a constant width that is way too wide. They overlap the surrounding scenery making them look like they are bursting their banks or floating.

It doesn’t happen with all bodies of water, only rivers. Any body of water with irregular shape seems to still look as it used to but smaller rivers look terrible. The UK is a great place to see this as it’s covered in these types of rivers and streams.

They are a real eyesore and spoil the realism whenever they show up. They only seem to resolve to look even close to realistic when you get down to only a few hundred metres above the ground.

I’ve sent tickets to Zendesk, posted screenshots in these forums, but nothing has been done about it. Here’s some terrible examples - Expand the images to see the problem properly: 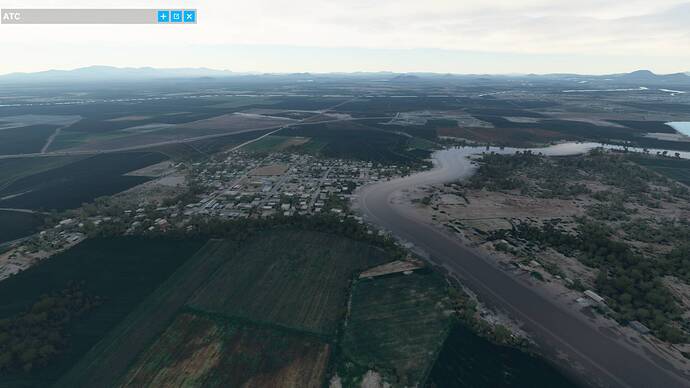 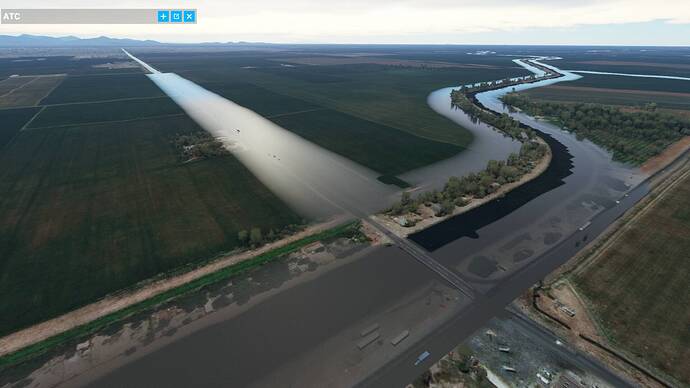 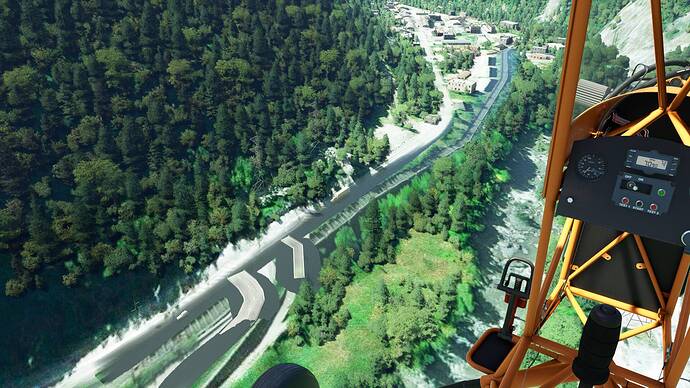 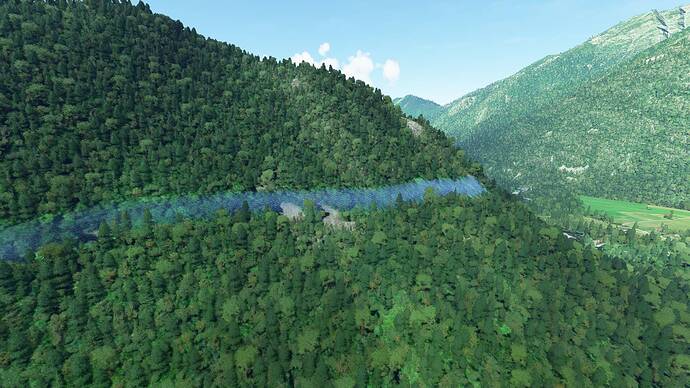 I sure hope they fix it soon because it’s hard to enjoy the scenery when the immersion is constantly being destroyed by such fake looking rivers and streams.

The first image is inside MSFS, and there are many rivers visible in the upper left side. 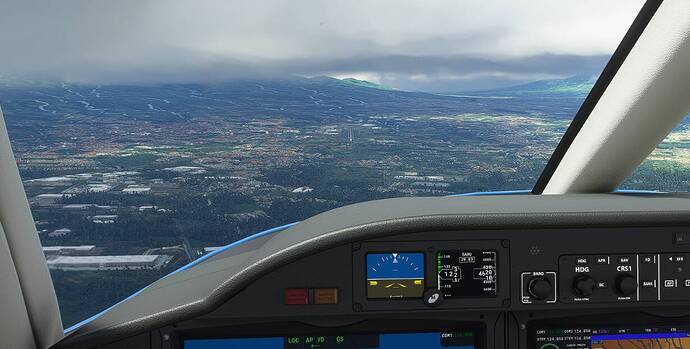 The second image is in the same position, but there is no rivers visible, taken from this video in youtube ( VOR DME pista 07, visual, pista 25 MROC - YouTube) 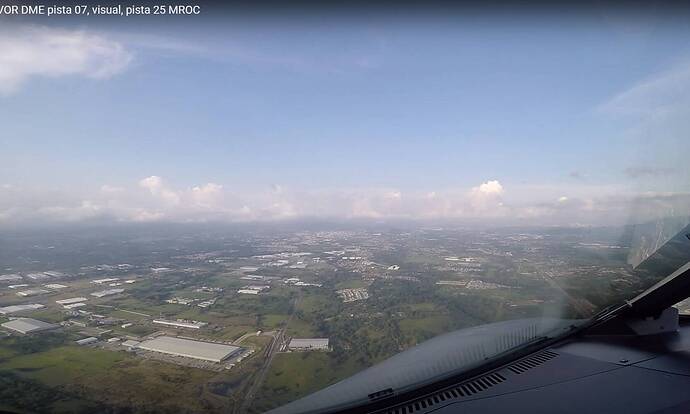 You can view the difference between images.

Most of the examples here are data mishaps. MSFS uses vector data to determine where water is and where it isn’t. This data isn’t always very good.

Some small streams become rivers because of that and sometimes the water is on top of the land and/or doesn’t correspond with the satellite image.

Unfortunately they’re not yet able to let the AI detect where the water is in the satellite image so that it corresponds better.

I wish this were the case but the rivers all over the UK looked fine all the way up until the UK World Update. I’m from the UK and the very first thing I did in the game was to fly around the entirety of the uk. This took many days, and dozens of flights and all the rivers looked fine. This was in the first week after release. I then flew a continuous flight from Florida, up the east coast of the USA, into Canada, back down to New Orleans, across to the Grand Canyon, to LA, up into Alaska and all the way over to Japan. At no point did I see any these terrible looking rivers.

Then when the UK World Update arrived these terrible rivers came with it. They stood out like a sore thumb. Something definitely changed and has been that way since the UK update.

That first image is exactly the type of terrible rivers I see all over the world now. They have a constant width and show up from huge distances away when they never did before.

They now have that same ‘fake’ look that the autogen roads and rivers have when we turn off bing data. They all have a static width and look like they are superimposed over the landscape rather than blending into it like they used to.

I’m really shocked that the community isn’t complaining about this in the same way they did about the ugly clouds. In my opinion the rivers are far worse of an eyesore and they looked fine for the first few months after release. It’s not like we are asking for an improvement to the tech, only a revision back to the way it used to be when they looked natural. I’m sure this is a bug because Asobo can’t possibly think this is an acceptable change for performance reasons.

That could well be. I don’t know what they could have changed in that update that changed it so much.

My experience is that rivers in Europe and USA have been pretty good overall, probably because there is better data available. And it has been that way since release.
South America is another story. Vector data there isn’t nearly as detailed there and a lot of rivers there aren’t that well displayed. Most of them are too wide or don’t follow the smooth curves of the satellite image.

If ASOBO explain me how fix the issue or what tool i must to use, i could change the rivers and streams in Costa Rica…jajaja

They introduced new elevation data for the vast majority of the UK, with the UK update, and I believe this messed with the rivers in a very negative way. Maybe they need to rerun the Blackshark AI over the UK again to update to work with the latest elevation data, or maybe they already did this but a more recent change to the AI caused it to glitch out on rivers. Maybe they changed how rivers are detected. Maybe they chose to simplify the geometry of small rivers for performance reasons. Whatever they did, they ruined the immersion in the UK just about everywhere because the UK is covered in smaller rivers that fall foul of this issue.

I did go back to the USA to see if the problem also happened there and although I could find a few rivers that now also have this issue, it was nothing like as bad as in the UK. The rivers in Mexico are just as bad as the rivers in the UK though. I recently flew around Mont Blanc and Northern Italy and saw the same horrible looking rivers there too.

This is definitely not one of those problems that seems to be a glitch in very specific places. It’s a much more generic problem that is much worse in certain regions of the planet than others.