Rollback to SU8 for Xbox Users

They’re not going to rollback. It would also wipe a lot of people’s logbook, which was a widely reported issue when rolling back from SU9 beta to WU8.

I would agree there are issues on both platforms (XBOX and PC), I would not agree it affects everyone, there are allot of us who have not experienced any issues.

That’s not to take away from the people who are having issues, which is incredibly unfortunate.

I’m still having a difficult time wrapping my brain around the fact that one person can have an Xbox with no issues and another can have one with the sim being unplayable.

WE NEED ROLLBACK NOW, 15 days ago we are waiting to be able to use something we have or are paying to use, so that they send us a depressing 1.5gb patch when the damage they have caused with the horrible SU9 exceeds 30gb of data, before we continue to be disabled They must return to SU8 for the good of all in general

Again, not taking anything away from those that are suffering issues, but can you please stop talking for all of us Xbox users… I’m not having any issues, this is as stable as it’s been for ages, and I’m quite happy not having any roll backs at all.

Picking numbers out of thin air doesn’t make it factually accurate, it just cheapens your argument. Unless you can actually back that up with evidence, of course.

Well it would be possible , as the betas are on different version. You would only be able to play/see users with same version.

The sim currently has issue, for me to fly I have to start up in a certain sequence first, then turn off features and remove paid dlc. This is not acceptable.

Either put out another patch or roll back to previous 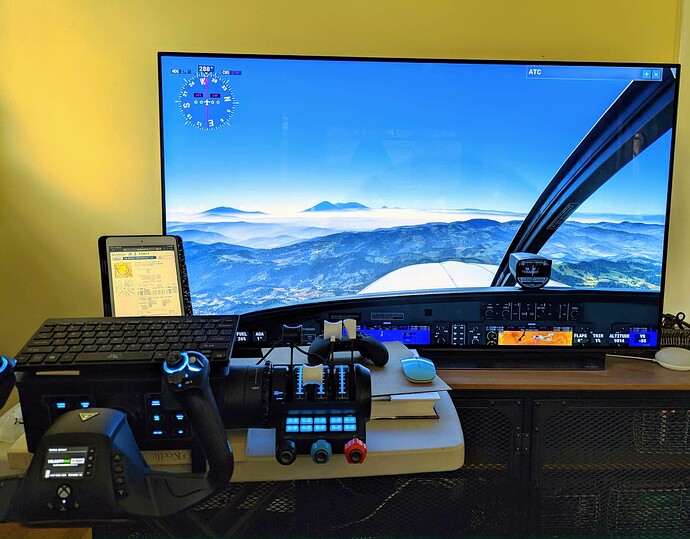 I just ‘flew’ from KMRY to KSFO in a Kodak 100. Live weather. Multiplayer. A very crowed air space in a very resource intensive plane. IFR plan. I counted at least 15 various planes both AI and real live. All with no issues or problems.
IMHO the only diffs between folks is cloud access and monitors. Also we all have different installs. By that I mean mods and flight profiles. I feel this ‘dirties’ up a person personal install.

I too fly the Kodiak but I do so without Garmin NXi, without live weather and without Ground vehicles. Any of those alone or in combination cause a severe stuttering or even CTD.

It was not like this with SU8. I would really like full use of the sim and DLC. Not to mention freezing on world map, mystery download and missing flight plans.

Even with Xbox it seems so different from one user to the next.

Try flying from Heathrow and over London at under 2000ft with everything on. I would be curious of your experience

so that they send us a depressing 1.5gb patch when the damage they have caused with the horrible SU9 exceeds 30gb of data

So it sounds like they have released the promised patch, is that correct? I gave up days ago, so have no way to know other than from comments here.

If this is the vaunted “fix” to SU 9, then from user comments it sounds like it’s 90% just another failure, and if that is true then this development team is completely hopeless. As I’ve said several times now, they need to STOP all forward development until they can get the core sim to a consistent level of performance (and not by just crippling the visuals to an unacceptable level). Regardless of platform, we all know of a stable version that existed previously. My belief is that SU 7 was far better than either SU 8 or 9, though some didn’t experience the SU 8 problems until SU 9. The biggest complaints I remember from SU 7 were related to new features that people wanted to see implemented, or improvements to existing features. I don’t remember any widespread complaints about the core sim, other than the appearance with SU 7 of “popcorn clouds.”

I’d take popcorn clouds all day and all night over this utter disaster we’re experiencing now.

I should have been more precise. There are clearly far more people commenting on the forums who are having serious problems than there are those who are having no issues. Of course, I know that people who are having issues are much more likely to comment, but the unprecedented level of negative reaction since SU 9 makes it clear that there’s a major problem. The fact that some miraculously escaped the disaster (so far…) doesn’t change that.

There were survivors at Hiroshima, too. That doesn’t mean it was just another day.

I have a few annoying CTD’s every now and then on the Series X but I’m not wanting anything rolling back. More importantly, it isn’t going to happen, I’m afraid. No matter how many posts or threads are created.

Well, for the large number of people experiencing severe problems, it’s either quickly issue a miracle patch that actually fixes this mess, roll back to a stable version, or go on without us and we’ll just forget this pile of garbage ever existed and find something else to do. It’s literally unusable for many of us right now.

Certainly not doubting that, and I agree with the sentiment but there’s no way they’ll roll anything back. I’m sure they will try to work on addressing the issues but who knows how long that’ll take? Months, I imagine.

SU8 was also a mess for me and prevented me from completing long haul flights without CTD and deleted progress in the logbook. How about a rollback to SU7?

Personally, I’m done with it for the time being. Like I said 2 weeks ago, I’ll monitor and participate in the forums, but I’m not even going to bother to boot up the game until the “miracle” patch is delivered. That also means no money will be spent in the Marketplace…no big deal in the grand scheme of things for MS I guess!