Update WU6: Setting “Off Screen Terrain Pre-Caching” to Ultra turns the sim behavior back to how it was pre SU5. Everything around you stays in memory and rolling cache isn’t needed anymore. (Of course still useful if you fly back or visit the same area again)

I disabled the rolling cache in the past since it was degrading my performance. However SU5 changed how everything works.

Before: Everything stays in memory until you leave the area, then it gets written to the rolling cache. So if you just fly in different locations all the time, the rolling cache had no benefits for you and only meant more work and wear on the SSD

After: Everything out of view gets immediately deleted. Without rolling cache that means that everything that went out of view has to be downloaded again.

Like this, looking in front and behind the plane in London 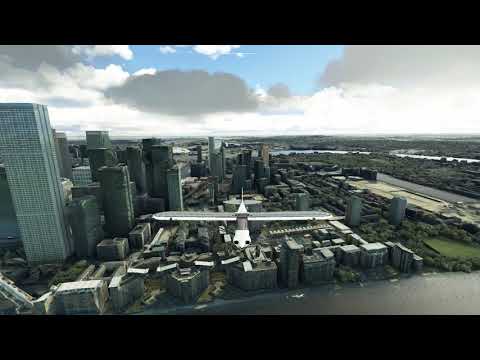 Not only pretty slow, it keeps hammering your internet bandwidth (confirmed with performance monitor, every time big spikes in network traffic)

So I figured, now I have all this ram left over, put the rollingcache on a ramdisk. (I used ImDisk for this) I created an 8GB ramdisk, 7.5GB rollingcache on it (cause 8 != 8) . No extra wear on my SSD and fastest possible. 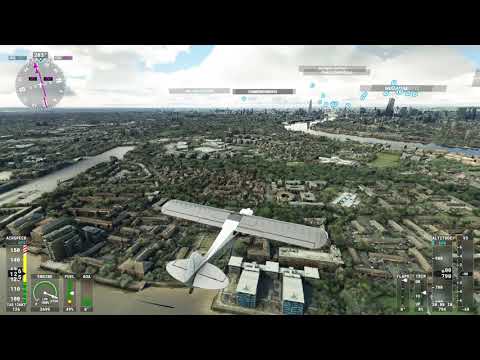 You still see it redrawing, but so much faster and no extra bandwidth usage.

8GB is plenty to explore an area and since I go somewhere else all the time, no reason to keep the rollingcache data or make it bigger. A ram disk serves just fine.

Tested what happens when starting the game without the ramdisk mounted. No problem, it simply gives a warning after loading, invalid cache path, rolling cache disabled.

I’ll use a smaller cache 4GB, still more than enough for looking around and doubling back in most cases, while discouraging windows from using the pagefile. (Win10 tries to keep 50% physical ram available and starts paging out memory when using more than half of your ram)

24 Likes
Rolling cache question
What and how does RAM impact performance in the sim_
Why my Around The World Trip has been cancelled
Please, solve the popping problem
[CONT] Official Discussion: Hotfix 1.18.15.0
CPU Upgrade for smoother VR?
Sim Update V (1.18.13.0) Bug Megathread
TroyairOne August 1, 2021, 9:25pm #2

I wondered about that but hadn’t gotten around to turning it back on. I’ll have to give it a try, or maybe see if Manual Cache is also usable for me now. Thanks for sharing!

I was able to get a manual cache area to work. It made the area at least presentable. Without it I cannot even get enough bandwidth to load in much of the photogrammetry and bing satellite imagery. It looks horrid!

I also ‘discovered’ this last night flying in Tokyo with buildings popping up out of almost empty ground (at much too close a distance)) as I approached. Turning caching made this a lot less obvious. Of course, I would prefer it if the draw distance was increased by default.

I created manual cache’s for the common areas I fly. Helps quite a bit with slow popping in of scenery.

Like the idea of a ram drive… MSFS sure isn’t using system resources any more… Plenty left over.

7.5, 7.8 would probably work too. I’m actually use 4GB ram disk atm with 3.8 rolling cache. More than enough for looking around.

ok, do u know why manilual cache is not selecteable, it’s grayed iut

Good post, OP. Thanks! Rolling cache previously seemed a no no since people were having issues with the cached terrain prior to SU5. But now, it’s back on!

No idea. It allowed me to try to use it pre SU5, but no matter what I did, always CTD when trying to download an area. I haven’t touched it since.

Thanks for the advice.

Having the rolling cache on an good nvme ssd is almost as fast as shown in the second video.

But as long as the ram usage is stalled by the game itself an ramdisk is an very good idea. I never mind that this classic would become important once again. I think the last time I used an ramdisk was on my Atari falcon (I owned the 14MB RAM card so I could allow myself that

That’s an interesting idea to use the leftover ram as your rolling cache. I also found that rolling cache is necessary now, but how easy is this to set up? Would it be possible to get some more detailed steps on how you set that up? Hopefully I’m thinking it’s harder than it actually is

Download ImDisk Toolkit for free. Ramdisk for Windows and mounting of image files. This tool will let you mount image files of hard drive, cd-rom or floppy, and create one or several ramdisks with various parameters. This all-in-one package includes...

That puts two icons on your desktop, double click the one that says Configuration 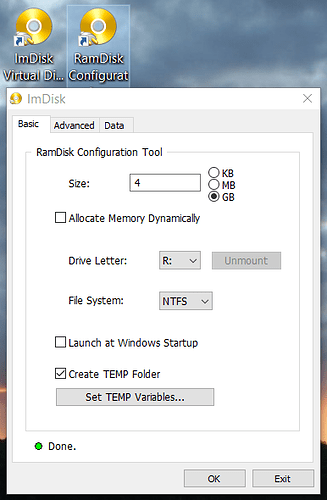 Select the size you want (select GB first) and leave the rest as is. Drive letter R: is the default but you can change it. Don’t turn on compression, just adds CPU time and leave the bottom check mark on. 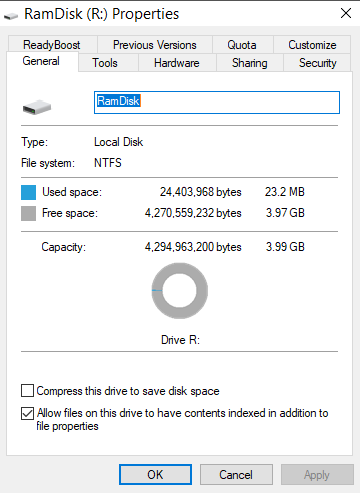 You can close that, it’s just standard drive information.

Then go to general options → data in game and set R:\TEMP as the path to use 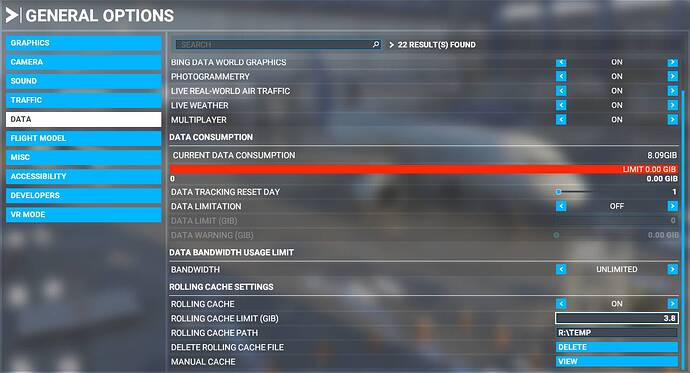 Since the game uses GiB, while windows uses GB, 4 GB of RamDisk is smaller than 4 GiB of rollingcache, hence I type 3.8 there. That makes a 4 GB rollingcache in R:\Temp which is more than plenty for looking around while flying through a PG area. However you can make it as big as you’re willing to ‘lock’ system RAM.

And that’s all there is to it.

When you unmount the ramdisk you get the option to save the contents (to mount again later) however I just let it go, start with a fresh cache after a reboot. I just leave the ramdisk going, it’s not taking any resources apart from a bit of RAM. (It shows up as System in the performance monitor)

Starting the game without the ram disk mounted simply gives you a message at startup that the rollingcache is disabled. 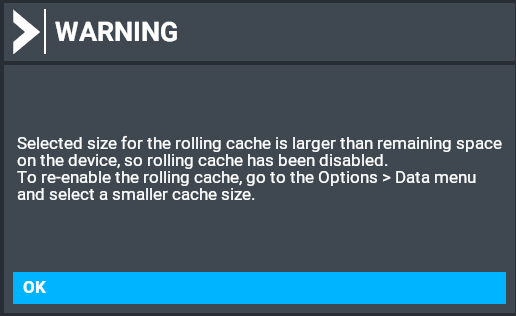 Simply go back to options and set it at 3.8 again (or whatever value worked with the size you made it). I guess the game rounds it up when creating a new rolling cache. However as long as the ramdisk stays up you can exit and start the game as many times as you want and it will continue using the rollingcache as created.

Btw if you look at the drive it will show ROLLINGCACHE.CCC just like any other file 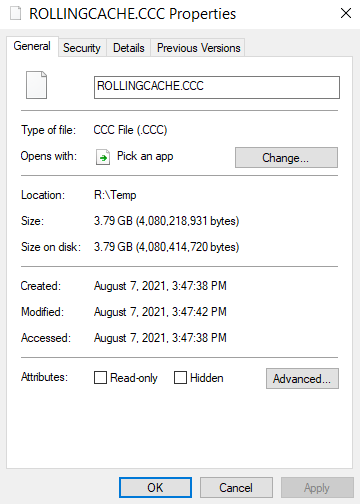 All very simple, no crashes, has been working very smooth for me since I first used it.

Thanks for the detailed guide! That makes a lot of sense, and I’m definitely going to give this a try. Just makes so much more sense than putting the stress on the ssd, especially with 32gb or ram.

Thank you for the detailed and helpful instructions.

While checking the 32Gb memory utilization I see that other then MSFS there also a bigger reserved allocation and thus the free memory is like less than 30 - 40 %. And this seems to fluctuate.

My question here is does that mean when the free memory gets to 0 anything else will then be on the physical page file? I’m quite hesitant to have that happen.

Windows 10 will use the remaining memory for cache (standby memory) 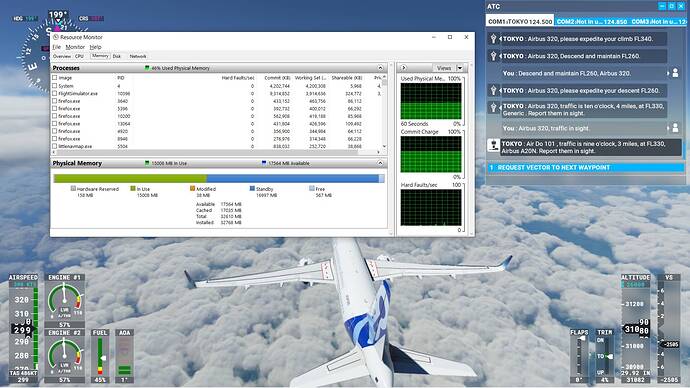 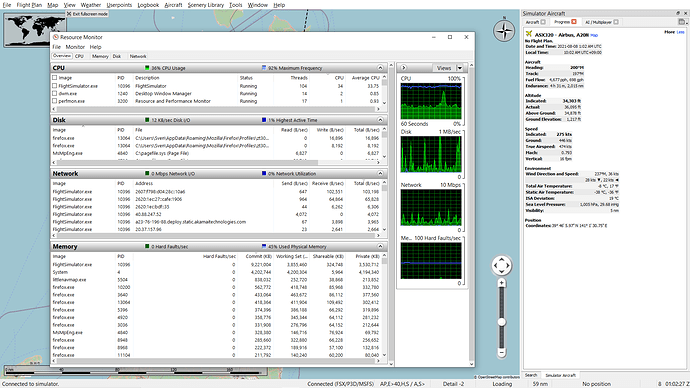 The reason to keep memory use under 50% is to stop windows from using the pagefile. Any inactive memory gets paged out when you use more than 50% of your RAM (windows 10 behavior, can’t stop it apparently). Hence I keep the ram disk small to stay below 50% even with tons of tabs open in FireFox.

It won’t matter for rollingcache though since that’s always active and won’t be paged out. Just less used browser pages and inactive memory from FS2020 might be paged out. It’s not really an issue until you get close to full utilization of your ram.

Thank you very much. Really appreciate your help.

@SvenZ
Sorry not very savvy with all these…What is the difference between these additional steps vs simply turning on the rolling cache in the in game menu and select a path to be one of the harddisk available? E.g. C:?

Or anyone can help explain?

Yes I second this. Thanks for the great explanation so far but could you add why it’s better than the default rolling cache? I had the same experience as the OP with the culling/constant donwloading so I just enabled rolling cache and gave it 20 GB and figured I wouldn’t had to look at it for a long time. Any better suggestions though are welcome.

Bandwidth for download at all right now seems to be an issue for me - I do wonder if the servers are struggling under the load of the new xbox player base. I also wonder if the new approach from Asobo means much more data is being downloaded per player for the reasons you’ve highlighted and I wonder if this is something that has been an unintended consequence of SU5.

Anyway, giving this a try to see if it improves things. Loading over Paris last night was awful.

@BafflingBerry63 - as above - this is functionally identical, but should be much faster than loading the cache from disk. I would especially not recommend using a physical hard disk (HDD) for the rolling cache as that will be slower than SSD. So in order of speed we should have: RamDisk faster than SSD faster than HDD faster than redownload - but that last will depend on bandwidth and servers.