Fix the bumps on the runways.

They need to fix this bug. It plagues so many airports across the world.

I also encountered a huge raised crack stretching across San Antonio in the Lackland to Castroville area recently.

Some of my friends loaded with cash have asked about buying this game, but I’ve had to tell them that there is a serious photogrammetry bug - sounds like they might not spend their money on the game now.

I don’t think that’s going to light a candle under anybody. I would advocate they still get it. I fly GA and I never see these runway tears. I couldn’t even create them artificially by using a drone camera at high speed, as suggested by someone in this thread, and I uploaded a video here as well showing I could no t make it happen.

I’m not saying it isn’t a thing, just that it isn’t as widespread as you may be suggesting.

We need a patch and not this " i never had this bug, so it isnt might such a problem as the people think", omg!

I will take your suggestion under advisement. And I advise you to reread what I wrote. I never said it wasn’t happening.

It’s not a thing if you are doing short flights. I do long duration flights, 3 to 4 legs, for a total duration of 4-5 hours. At first everything is fine and the first few legs, the runways work correctly. However, at some point during the period, the airports stop loading up properly and on the return flights the tearing/not loading of the airports (properly) occurs. So yes, the first few hours (perhaps 2 to 3 hours) everything is fine and loads up fine. After that it doesn’t! You wouldn’t know if you fly short 1 or 2 hour flights.

I flew for 5 hours 45 minutes, in fact it would have been closer to 6.5 if you include time on the ground, around Lesotho on Saturday. I landed at over 30 airports, many of them paved, and I didn’t see this. I posted about it on the “What did you do in MSFS today?” thread.

Whatever is doing it, it isn’t the length of you session either.

What did you do in MFS today? General Discussion

I watched a story on the news last Friday about a pilot in Lesotho delivering Covid vaccinations to remote locations, along with a doctor, medic, and the reporter. That sounded like a wonderful idea for a flight, so I whipped up this plan. VFR Moshoeshoe I Intl (FXMM) to Mafeteng Airport (FXMF).pln (10.2 KB) [image] Taking off from Moshoeshoe I Intl in the default Cessna 172 in the Red Cross livery, the closest to what I think they were flying in the article, to land at the first stop which…

Runway tears only happen at airports in PG Areas. Africa has no PG Area so you don’t see them there.

The problem happens at the final stage of refining the scenery, which moves the runway to the height the highest detail PG data is at. It does this in square sections, hence tears, height gaps appearing during the update process. Inconsistent ground level is the root cause of the issue.

I only fly in Iran with PG on. But every time during the landing on 3rd leg this issue occurs. Every time guaranteed. It doesn’t happen on the first or 2nd leg. And it doesn’t matter if I circle the airport (hoping that it will load up). It just tears/doesn’t load up properly and I land on “dirt”!

One of the theories I remember was it only happens to jet aircraft, some thing about their speed, and perhaps a broadband download rate combination being the cause.

So presumably you guys have turned off PG, and seen the problem disappear entirely?

I have not tried without PG. The game looks very bad without it. Seems like there is some kind of leak of some sort somewhere that the program works fine to some extent and then it doesn’t! I tried deleting FSUIPC and that didn’t change anything. If I recall correctly, this happened after they optimized the game after WU3 when a lot of people had major fps hit/issues! Not sure what they did, but I did not have this issue before.

It may not look nice, and I wouldn’t suggest leaving it off, but I would urge you to try it without PG as that then removes all doubt as to the cause. If you still get it with PG off, then maybe its not PG after all.

We’ll only know that if you try it, though.

Wait a minute, Iran doesn’t have PG data either, or do you mean Iraan Texas?

Do you have a screenshot of the problem? The runway tears issue don’t show dirt either, just a height difference between sections of paved runway. Perhaps you have a different issue?

PG on or off looks the same in Iran. Bing data in general should not cause any height issues (although the Caspian Sea has a big height bug, off shore the water levels don’t match causing a nasty tear)

You are absolutely correct. Perhaps it could be a little different issue since the runway simply loads up late. So the scenery doesn’t get created in time. Very similar to what MATSC133Tech Alpha Insider had posted on April 19th. 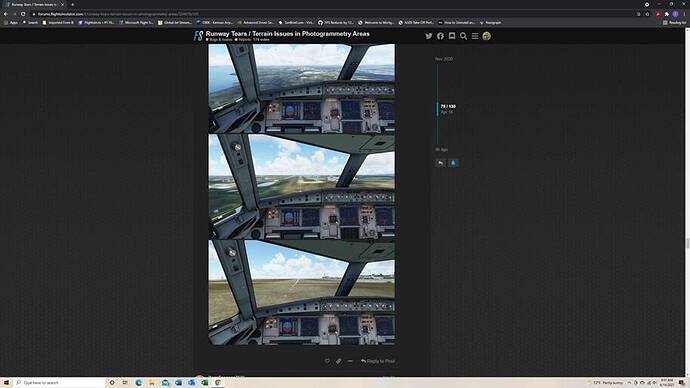 Did you ever figure out what causes this? Any solutions? Some people think this is different than runway tearing (which it is as far as the terrain goes) but not sure what category this issue belongs to!

Kadina airport (South Australia), it was quite a challenge landing at night in this runway, couldn’t park the aircraft at the gate since the gates were in the floor -1!!!

I have only had the problem with jets. I fly mostly GA, with very long flights on occasion. Never had a runway tear issue with GA airplanes in photogrammetry areas. Even with jets, the issue is intermittent for me. The same runway at the same airport can have tears on one flight that send me catapulting into the air during the landing roll, and the next flight, the runway is completely smooth.

It’s all about approach speed and timing. The tearing issue happens at the final stage of refining the scenery. If you fly very fast, you land before the tears happen. Fly slow, it’s fully resolved before you get there.

I’ve had it happen plenty times that after I come to a halt, my plane (the ground) suddenly goes up or down a couple feet. Today I landed on an airport with strange black ovals hanging above the runway. It turned out those were the ground lights that had not fully resolved yet, ie at the wrong height. After I came to a stop they all dropped to the floor.