There are two things that I would like to hear your advise. I bought an X56 almost two years ago. I have used it only 3-4 times on Xplane. Then I moved to a different country for work and did not use it again. So we can say it is brand new. After I installed MSFS, I connected X56 and realized that Rudder is not centered. Even if I do not touch the joystick when it is centered position, the rudder is slightly goes to right. I download the software and calibrate it but cannot fix it. Any idea how to fix? (Warranty is over)

Second thing, as you know, there are two knobs on the throttle (please see below). I would like to configure those knobs for instrument panel brightness. Unfortunately I could not do it. Any idea how to configure that way?

Thanks in advance for all your help! 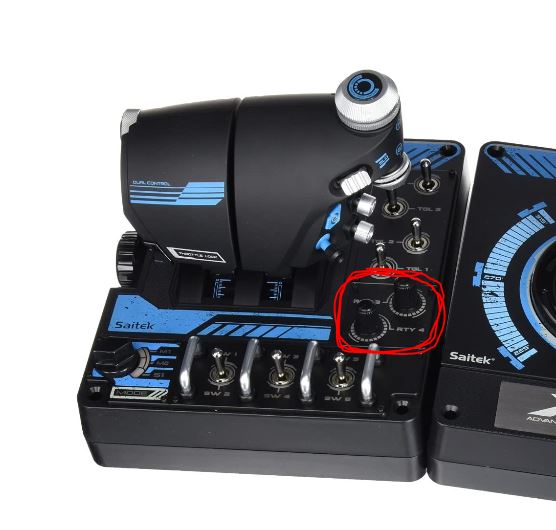 The 2 knobs are useless at the moment configuring in sim. They would have to be configured via the profiler. They simulate a constant button press continuously so not useful unless you put them on an axis config.

As far as the rudder being off you tried the calibration function within the logitech software. It may be a hw issue then.

Might try taking the tension spring out and using one of the cans of compressed air to blow it out. Could just be dust interference with the sensors.

If that doesn’t work it is most likely a physical issue with the hw. If it was stored somewhere where the stick had pressure on it like laying on its side or something leaning on it. That can cause the issue as well.

Thank you for your answer! I really hope they are going to add an axis config to knobs in the future so that we can use them.

I’ve found they work OK for things like heading bugs.

The 2 knobs are useless at the moment configuring in sim. They would have to be configured via the profiler. They simulate a constant button press continuously so not useful unless you put them on an axis config.

I’m not shure what is your difficulty here. I’ve been using these knobs to set mixture for two engines since the game launch. I configured them in sim and my software-driver has been untouched for these same knobs.

By the way, I configured the two throttle knobs (those silver ones close to the thumb while holding the throttle) to adjust prop advance.

Also, I tried to configure the left side pinkie knob to adjust pitch trim, but it becomes painfully slow. Recently someone posted a hack to make a hardware trim wheel (that works exactly as that left knob) to make it usable, but I never tried it.