How old is the map data for San Francisco? I thought after the USA update, it’ll be updated to at least include a version within the last 2 years

My specific check is at the Salesforce Tower and Park area. In game, it’s under construction where as the Bing maps aerial view is showing completed park and tower.

Is your photogrammetry data enabled? For some reason it’s turned off for some people after updating.

It looks better when turned off

You’re not the only one seeing outdated map info. There are major interstates that have been open in Greensboro for years now that are still not seen in the sim - unless you loo very close and see the cars driving through the farm land where the roads are supposed to be. So some part of the sim knows that the roads are supposed to be there, but they’re still not being drawn.

Notice the mountain (in the river) still has water on the very top. 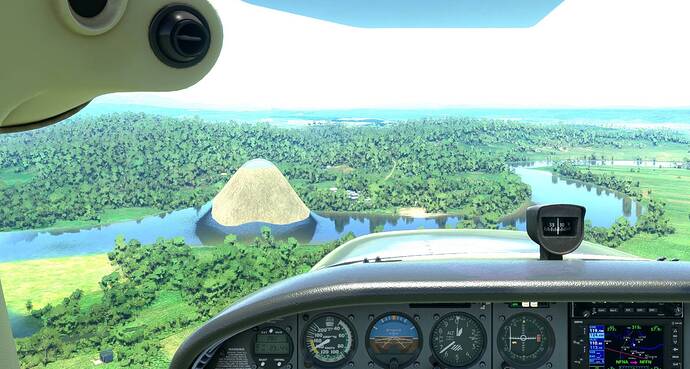 Is your photogrammetry data enabled? For some reason it’s turned off for some people after updating.

Pretty sure it’s on. I see a perfect construction site and the outlines of what was there probably more than half a decade ago. So what dates are they using for the Bing Maps Data? How do I view the same photogrammetry photos that they’re using in game from the bing maps app?

That’s…errr… one of the new wonders of the (Sim) World.

Originally a stadium in St Paul was at least 5 years old. Now after the update the stadium is completely gone. But I’ll have to look into what people have said about some photo realism setting.