Next to the b button to fix altitude not working,something seems off with the starting of engines.Yesterday I wanted to start the engine with crtl+e on the boeing ,going for frequent flyer miles achievement on steam ,& it only was able to start engine 1 and 2 using the key combo. The message to start engine kept popping for 3& 4.I fixed it manually by searching for a tutorial how to start the other 2

Engine 1 does not start A320 General Discussion

I had the same issue with my Boeing yesterday for takeoff. Engine 3 & 4 not able to start with crtl+e to start engine. It appears that this button combo is only working half of the time lately.At least it still responds somewhat,unlike pressing b to fix a wrong altitude alltimeter…that doesn’t seem to respond at all… I searched a how to tutuorial on youtube to start engine 3 & 4 on the boeing,since the key combo would only start engine 1 & 2,not 3 & 4. maybe this guide to start engine on A320n…

I also had it on the jet plane Cessna Citation CJ4 before,but was able to start it manually without tutorial in that one.

787: AT button on throttle dont work anymore since SU5, was fine before.
VFR: VFR flight planning is completely messed up. AP fly not on track, ILS is not working.
VFR/IFR: Destination airport got no sign anymore. Any Airport around is signed but not the destination airport
CTD: Less than before but still random crashes at longer flights.
Volumetric lights: Erased

If I move camera view up & down in 3rd person view ,there is cloud flickering at times. of the edges of the clouds Blinking clouds after patch 5
The “blinking cloud after patch” is nearest I could find,but they aren’t really blinking,its just the outline of clouds having a little drag effect on it.Only moving camera up & down the outlines have this distortion/delay spread/delay flicker on them.Its not like the whole clouds flicker. 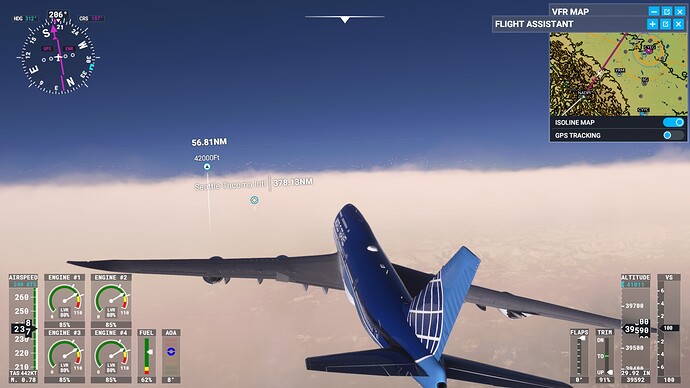 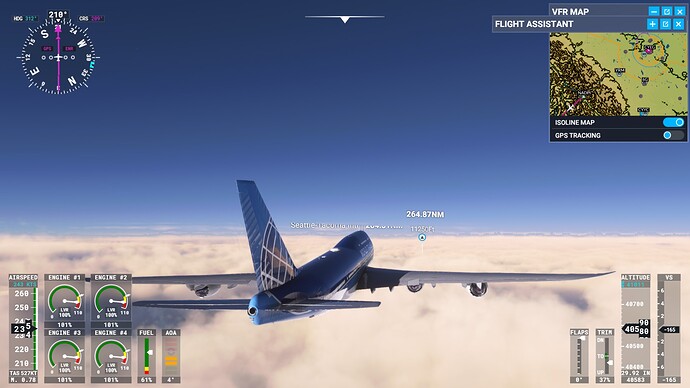 20210801144729_21920×1080 238 KB
Just completed the flight for the steam achievement “frequent Flyer miles”
But didn’t get the achievement after the session had ended
" Fly from LFBD airport near Asobo Studio to KSEA airport near Microsoft HQ."
I did let auto pilot handle most of the flight as I wanted to go for the "look ma,no hands " “Utilize autopilot for a total of 600 miles.” in one go.didn’t get either.

Also letting the plane land on auto pilot is not a good idea;Often the plane lands next to the runway & with the boeing it didn’t do the flaps ,nor the landing wheels during the whole descend.
So I had to reload the save just before the landing,but it appeared like all the IFR progress was wiped & the plane started to ascend to 240ft again ,stating that I had to do 3000+Nm distance,while I clearly was next to the Seattle airport,ready to descend for my destination.
I had the feeling the IFR plan & the pins on the map didn’t match with the instructions I was getting either. 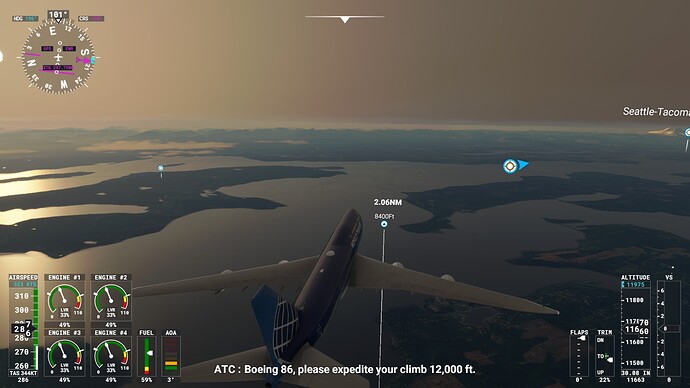 20210801161845_11920×1080 208 KB
Here you can clearly see how the ifr marks say a certain altitude,while ATC instructs to do something completely different.Even though I’m near my destination & should indeed be ready to land as the marks suggest.
Apparently I haven’t been the only one who hasn’t received the “frequent flyer miles” achievement after completing it;

Once you get above 25,000 the ground textures become horrible blurry and like something from FSX days. Not good never had it this bad before it’s like they just don’t want to load in. The LOD really needs looking at 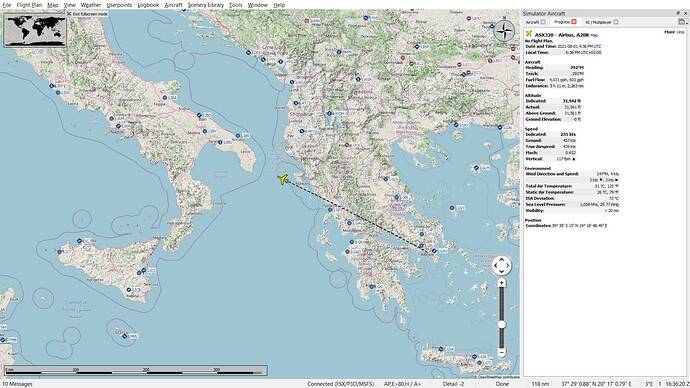 Approach is a mess as usual 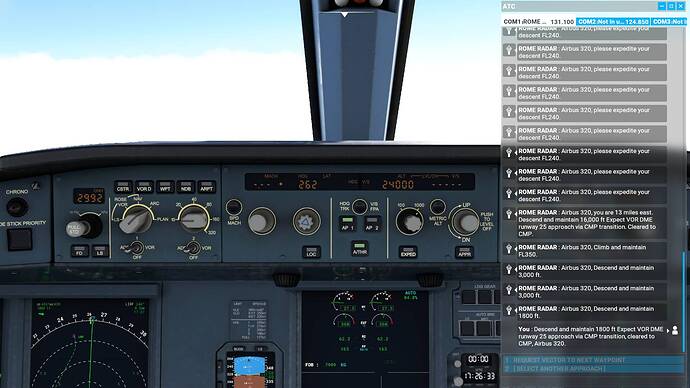 OK after settling down after this update and patch I decided to look into the basic problem by creating a flight from CYYC Calgary to CYVR Vancouver.
Empty community folder. Here was my system, Task Manager, Little Navimap and Action screen capture. 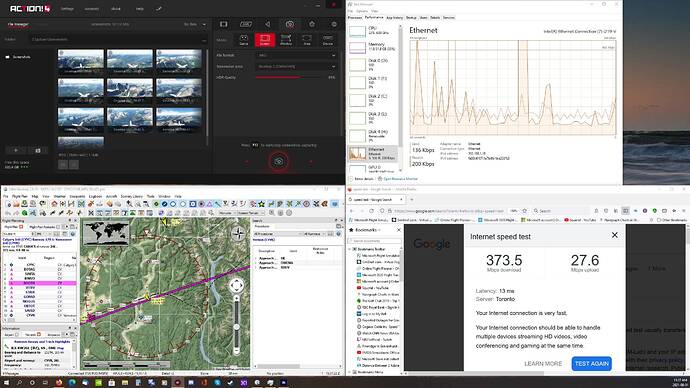 We are flying over mountains 10,000 feet if you were flying VFR you would not see the roads to follow only if you were right over it?

Final thought: The PC version is just not usable as it is now. I have questions as to how other items effect this flight simulator? People are re-installing even re-installing windows this should not be necessary?

The effects of other add-ons is a nightmare. The communication from Microsoft as to solutions is vague.
Uninstall A320 do not use WT app also CJ4 also CRJ does not work. I could go on but I believe this is enough information to take action to satisfy PC users.

I now rely solely on little navmap to line up with the runway. By the time you can see it, it’s too late to make any meaningful corrections. It’s fine, since lining up a plane on a gps map works no matter what the weather is…

The servers are probably also under heavier load due to the aggressive culling. People compensate with higher terrain detail (max or above max in usercfg.opt) yet every time you change camera angle it has to download that view direction again. Perhaps the rolling cache helps now (Turned it off long ago since it made my performance worse)

I’m not so will pass on this upvote…

If the inability of the 320 & the Boeing to climb at full power is linked to heat,it might mean that this bug topic hasn’t been resolved after all Wrong temperatures or maybe its because there are heat waves irl ,that they are in game with live settings. I guess it could be realistic in that case?

@NineMile1 nr 5 “different heading inside & outside aircrafts” might also be the reason why autopilot fails to line up with the runway& often lands next to it,
if the plane even lowers flaps & wheels at all while landing on auto pilot,which my boeing in the picture of my former post didn’t do at all.

For ref, I am not having this problem and am locked at 30fps with 200 LOD running on a five year old i5 4690k, Gtx1060 6gb, 32GB RAM system… Since SU5+hotfix it is super smooth with no pop-ins but then I am running without any mods unless they have been cleared for SU5.

Hi All, I have to finally speak up about the Issues for everyone. Here is the problem that is causing everything for everyone. MS/ASOBO have limited RAM and VIDEO Memory in the PC Version to Match the XBOX! It is hard coded to 6.8GB Available RAM and 6.5GB Video RAM to use and no more. Does not matter how much ram you have 16gb 32gb… or Video 8Gb 11GB. You will not be allowed to use it on a software level of the Sim.
I see people increasing LOD to 4, 8 and more but it all has to squeeze in to 6.8GB of RAM and just means more is swapped in and out on the fly. Then take addons they have to now fit in to the 6.8GB Memory footprint as well. So this is causing more and more popping and pressure on the system. If you do not believe me run FPS in DEveloper mode and I defy anyone to get passed 7GB Memory and RAM its impossible. So load up large addons and increase your detail and textures and more swapping goes on and pressure on the system. Its the good old Memory Bottleneck in the software due to it been limited. Also why can we not see the graphic graph in delveloper mode? because it is FULL RED HARDLINING 100% all the time at maxxed out. So all they need to do is un stop the RAM and Video Limit they have applied to the coding. Please check on your system if you are unsure or dont believe about this.

6 Likes
Anyone figure out how to force MSFS to use more RAM?
Possible fix for improving the graphics after SU5
MSFSRonS August 1, 2021, 6:35pm #447

It is hard coded to 6.8GB Available RAM and 6.5GB Video RAM to use and no more. 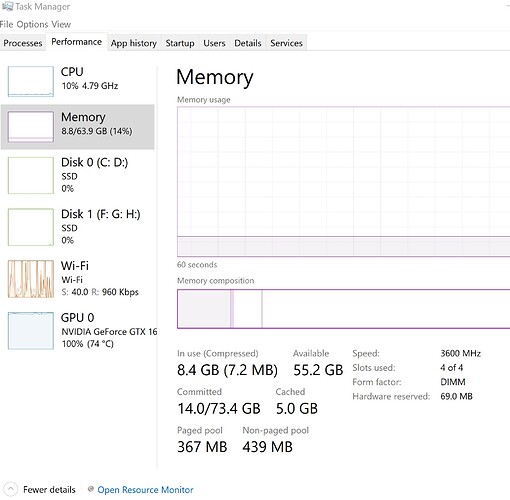 Yeh, it’s really sad we have to do this though. I know from the window seat on as real airliner I get a decent view of the runway from a long way out if I’m on the correct side, in this game from the cockpit making a visual approach from more than a few miles out is impossible because you can’t make out the airport.

I’ve also had some great views of airports from cruise altitude 37,000+ in real life for those making strange comments that blurry high altitude scenery reflects real life. No, it doesn’t.

I would like to see what @MrTonySM gets on his system.

Must be really depressing for those that bought a RTX-3090?

Hi All, I have to finally speak up about the Issues for everyone (…) 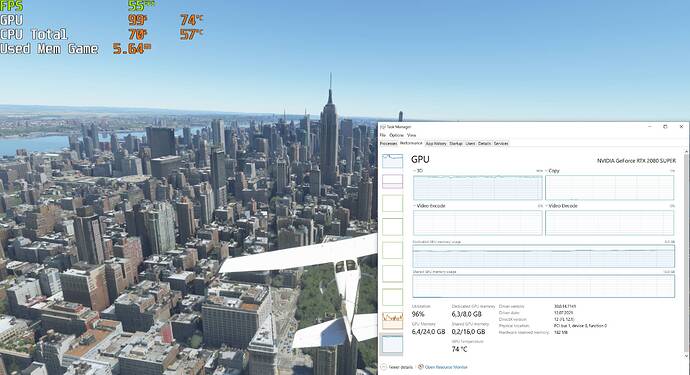 This is max memory used by system, apps, game and other processes etc.

edit
For sure smth is wrong with colors and gamma after SU5.

Can you post a video inside the a320 panning the camera?

Just a heads up that for me I had to uninstall Process Lasso or I would get repeated CTD’s.

Seems to be stable now, even with my community folder loaded with weather and plane mods.

And just for fun SU5 reinstalled the entire game on the wrong drive! (of course it had to be the slowest one). I did not choose this, so I had to reinstall the entire game again - twice in 4 days… Good times!

The good news is that I was able to fly my F35 for 4 hours last night w/ zero major issues.

Looking forward to hotfix #2, 3 and beyond!

Btw, does anyone else have large groups of people just disappear when you get closer to them? I had zero problems with this prior to SU5.

My controls keep freezing momentarily. Can´t fly the airplane because every few seconds, my joystick and rudder inputs would not translate. Not a hardware problem, or else it would only be the Attack 3 or the Saitek pedals failing at once. Unplugging and replugging doesn´t work. Also, I´ve noticed that the Joystick sensitivity settings were way off when starting the sim the first time; I was constantly pushing too much right aileron though the joystick was in the neutral position