since the newest WU (Spain), i repeatedly am getting MESH glitches in the landscape, building endless “poles” from the ground to the sky. As an example: about 50 nm south east of Madrig, see the screenshots. 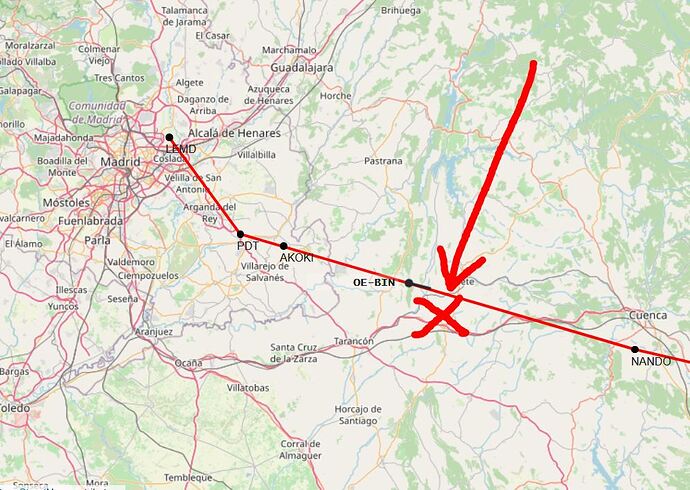 just flying around that region

right after the current WU (Spain)

I also re-checked several other regions worldwide like Australia, Africa… i only seem to find these “spikes” in Spain… they seem “new” since the recent World update.

There is an existing thread on the issue, and a fix is mentioned there.

MODERATOR EDIT: This post merged into this topic. Hi all- I’m on Xbox Series X and I just downloaded World Update 8. I noticed when loading into Madrid some vertical lines from a distance that are appearing. See screenshots below. I uninstalled any add-ons that are near Madrid, and also tried resetting rolling cache, and restarting sim. What is interesting, if you look at the video below, the vertical lines sometimes disappear when I move my mouse and then reappear [D957D967-EC13-411F…

I was intrigued by this so have just flown out there but no sign of this on my system. I don’t know what to make of this. I’m using an RTX 3070 card, my NVIDIA drivers are V511.79.

Maybe it’s something in your system or your community folder but since others have also reported this phenomena, the explanation is probably more complex.

Are you using any Bijan Studios products? If so, try removing them and see if that fixes your problem.

Thanks a lot to all of you for pointing me in the right direction!
I also haven´t seen this other mentioned thread yet.

All together seemed to have fixed it for me.

Yes, i have the Bijan 4 Seasons mod. I also read the different ideas in this mentioned thread. There people seem to have found an issue with this other “Boats” addon from Bijan, but i don´t have that one.

Yesterday i already deleted my rolling cache a couple of times, i also disabled all my addons via AddonLinker… but still got those “spikes”.

What was important for me to find out was the fact, that only some people seem to have this mentioned bug, so i was sure, it shouldn´t be something “in general”. Thanks again for all your feedback!

I went on testing today, deleted my RollingCache once more, still had all my addons disabled, but now i also deleted anything from the “SceneryIndexes” folder - which is hidden deep down in your \AppData\Local\Packages\Microsoft.FlightSimulator_8wekyb3d8bbwe\LocalCache\SceneryIndexes - and also reset all of my game settings one by one, readjusting everything afterwards.

What can i say… it seems to be all fine again. No idea ,what actually triggered the initial problem for me… just deactivating addons did not fix it yet. I also would like to mention, that those other users, having the other Bijan addon, crashed, when flying through those spikes. I was definitely able to fly through them without any problems… so maybe several different reasons seem to trigger this “spike bug”, it seems to me.

Anyway… for me it seems to be SOLVED now.

I’m so glad to hear it!
Yes, I’ve read some people say it was seasons. Others say it was boats. I have no idea why!
I’m going to move this to our Community Support section so other people can find it, and I will mark your last post as the solution. I hope it will help others out!

For me it was the boats extension. Just deleted it an after 4 hours trying I could perfectly land in Madrid. Unbelievable what a add-on can do and you wouldn’t notice may be a long time, till today for me!

Hi, so yes I can confirm that the Mod “Bijan-Islands and Boats” is causing this problem…
Uninstalled and everything is back to normal

same, but i stay don’t get it, how this is possible, where the boats and islands and where flat place around madrid

Yeah the same, I don’t understand how it happens, there is no water there