In my 70 plus years, I’ve flown, or flown in, a pretty wide range of aircraft and I reckon this sim in both 2D and especially VR is mesmerising now, and can only get much better.
Heck, I only found out this week that in addition to ridge soaring, we can set up cloud formations that produce entirely usable thermals in the sim, without using external software, and this way before Asobo has implemented gliders officially. And I do it in an excellent free glider too (soaring enthusiasts are welcome on the MS Flight Simulator Gliders group on FB, by the way, from which this image and info comes…it’s not my screenshot). 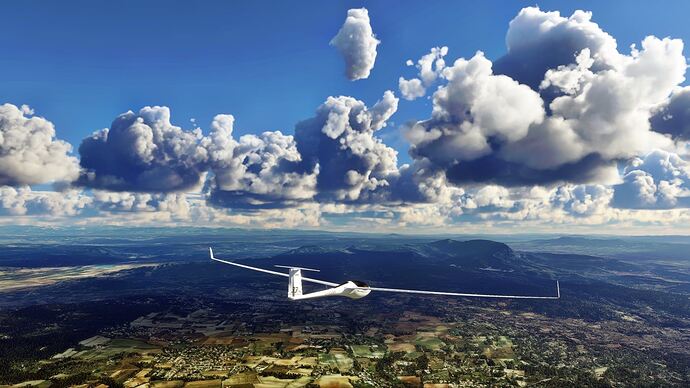 OP doesn’t like the trees? There’s a great mod for that from bijanstudio that I can recommend. Heck, he even took the time to get my home state of Tasmania right, let alone the UK.

Announcing “4 Season Pack” - An ongoing project and always updating. This seasons mods are not just about colors changes, it’s about correct vegetations all around the world with correct sizes and to bring realism and immersion to your flying experience. [Four Season Pack V6 - SU5 Compatible - Microsoft Flight Simulator] For support, bug report contact me via email: bijanstudiola@gmail.com New Version 4 features: For previous update logs and more pictures and information vis…

Some very valid points there especially the camera controls. Really miss the old fsx views such as tower view etc.

However I disagree with the overall score. You’ve based it on a comparison against real life in many instances as opposed to alternative software. When you do that then I would give MSFS a higher score than anything else.

Well I’m using Xbox X/S and a lot of what you’ve mentioned is far from true despite the fact the Xbox doesn’t get all the perks and features of using the simulator on PC. So I would presume some of the comments made aren’t accurate.

Yes there are some bugs and that’s normal and I’m sure the community and technical team are working this out. After all, we’re a family of pilots and enthusiasts here so bear with it a bit.

I hope you’ll find the improvements and bug fixes on the regular updates would suffice your comments.

The simulation level you’re talking about doesn’t exist anywhere. They are improvement ideas for the future but do they warrant a 2 star rating for such a marvel that is MSFS. I think that is harsh.

Clouds are not random by the way. Lol.

I´m absolutelly ok with post before me. For me, biggest problem is missing tower view which I was love in previous versions of MSFS. Don´t know how is so big problem to implement this bacis thing so long. For realistic feeling of flybies, realistic start and flying around airports, especially small VFR strips is tower view must have. And too height trees are problem in Czech Republic too and many months too. Is so big problem to set maximum limit for trees height in each country? OMG …

Have you ever flown a Level-D FFS? I have flown a dozen of Level-D sims throughout my career. The graphics aren’t that good, and certainly can’t be compared to MSFS. Same for sound, for AI traffic, well there is none.

Also the flight model is sometimes questionable and often doesn’t “feel” like the real aircraft. Even between simulators there can be great differences in the flight model. They are excellent procedure trainers, but that is basically it.

There is a reason why you still need to do 6 take-offs and landings on the real aircraft during type training. You can only perform Zero Flight Time Training (ZFTT) when you have previous experience on comparable aircraft type.

Obviously you can’t compare sitting stationary behind your computer screen in your pajamas with a cup of tea in one hand and a cheap joystick in the other to flying a full flight simulator, the level of immersion is different when sitting in a cockpit made from the exact same hardware as the real aircraft. But what happens outside the cockpit on the projector screen can’t be compared to MSFS.

But good that I made your day

Guys and gals , this is just another thread started for the " naysayers " and the " merchants of doom and gloom ", to have their little group therapy session .

It will get approx 700 replies and then thread will be closed.

Saw this type of thread on numerous occasions .

I find anyone resorting to labeling or name calling others in a debate do so because they lack the ability to maturely discuss a topic.

I agree with some of your points but am surprised that anyone can give the overall package 2/5 ! As others have said, bugs aside the sim is jaw dropping in VR.

Regarding trees in the UK, I highly recommend Bijans tree mod - his latest version also includes a terrain mask which makes the overall terrain colour much more realistic for the UK I think.

Xplane’s default 737 is a joke, zibo 737 saved them there. All flight sims come with less than stellar functioning planes but the devs improve it.

Yeah you are right. I love the ai. Hjt can’t wait for so many fixes

Thank you for making my point that FS 2020 isn’t “far ahead” of even the most expensive Level-D sims.

Because he did not give up and really try to get the most out of it.
Vr user with few years of experience (don’t pretend to know everything).
I give a 10 0ut of 10 on the idea but a 3 of 10 for playability.
8600k 2080ti 16 ram M2
Too much tweaking needed, its alright for forum people and anthousiat but not for many of the people i know who will prefer to stick with other sims for at least another 6 month / a year.

this sentence ‘but I’m more curious why someone would spend 9 months on something you are clearly very unhappy with?’ really say a lot about you…
Hope you are happy with the likes you get trying to attack him like if he was lying.
Really not hard to undersatnd that the frustartion made him try, he did not say he played it every day for 10h.
for the past month that i have it i must have spent 3 weeks tweaking and 2 days trying to fly at an acceptable level.

This Sim feels exactly the same in Vr as Assetto Corsa Competition with the Teporarary Anti Aliasing’.

Sim should be half the price until fully optimised.

Agreed with all you write there.

I think sometimes the expectations simply aren’t realistic, or not even based in reality to begin with.

This sim has its flaws in a variety of areas to be sure… but overall if you are willing to zoom out to a macro level view it captures an overall “feeling” of flight, and importantly enjoyment, in a way no other home user based sim has for me personally. On the visuals side since the weather was mentioned in the OP I’ve had several “wow” moments related to the clouds, weather and lighting all coming together that no other sim has achieved either.

And I would strap myself into my rig, don my headset and blast down some valleys in the T1/A over going and doing my LPC/OPC any day

Actually I agree with the OPs assessment of the trees. The sim reminds me of that old Morecambe & Wise Sketch where Andrew Preview is exasperated as Eric tries to play Greig, he plays all the right notes but not necessarily in the right order. The sims UK trees are like that, we have all the right trees, they are just not in the right order. In national parks the wrong trees drastically alters the way a landscape looks too so getting it right does make a huge difference in my opinion. It can be done correctly too, Orbx did quite a good job when they did there true earth version of the UK for XP11

My house is half in the ground and is 1 story tall despite being 2 stories in real life.

According to fs2020 half my city is bungalows. Despite being almost exclusively 2 - 3 story buildings.

If you think a bit more critically you’d realise that forests in certain corners of the country will skew the figures massively.

Generally, walking around London, for example, you’ll probably see about 5% of trees that look anything like they do in msfs2020. I should know, I’ve lived here for over 20 years.

While it may be true that certain forests contain a larger proportion of these types of trees, it’s not true amongst the general countryside and urban areas.

Maybe 5% is a low estimate. But I would bet £1000 that it’s not above 50% if you excluded dense forests or very specific corners of the country.

I may have gotten the names wrong, but the tall thin tree archetype that shows up in game almost everywhere is very rare around the UK. It’s something you’d expect to see in the rolling hills of Norway, Canada, or Russia. Not here.

Here we have evergreen trees, fruit trees like cherry, pear, apple and big round sycamore and oak trees. Most trees are either small and round or big and round. Not tall and thin and broken up.

I did uninstall it for 2 months and 3 weeks at different times. I nearly gave up.

I just really want to make it work.

In theory, this game is my dream game, I absolutely love the concept, in fact, I came up with the concept of the game in 2018, without knowing anything about it’s development, because I really wanted to see a game where google earth type imagery/3d buildings and lighting technology come together to make a flight simulator like real life.

I had some fun on the game, and it wasn’t all bad but given the performance issues I had on top of these issues I raised here, I would only give it a 2 star rating.

It’s not. The sound engine is not great. There’s dolby atmos support you could implement, there’s true 3d spatial sound.

I don’t think the team care enough. They wanted to rush this game to make money from the Pandemic and lockdowns. it should have waited another year in my view.