Struggle to decide where to fly

I’ll be trying it in the FlyingIrons Lightning

Ps. I’m also landing in an airport in every county in England, Wales and Scotland. Nice short trips and low level flight.

I am about to embark on learning the WT CJ4 which somehow I’ve managed to put off… I think because I’ve not yet found a YouTube resource like 320 sim pilot to teach me that plane.

I like sunrises and sunsets, so I look for wherever it’s rising or setting and fly there. I also fly around my Pacific Northwest neighbourhood quite a bit, and I’m still getting to know the place. No fun if you live on the prairies, I know. Also, I like to visit the airfields that are famous in other sims. Batumi, Sochi, Dubai, Beirut, are all my regular spots. There is the route the Crusaders took that is fun to fly over. Sites of great battle in history. Missing tombs of emperors to hunt for…

I’m gonna chime in with Google Earth’s ‘I’m Feeling Lucky’ button, which zooms you in on a random real world point of interest. If you’re up for a long-term adventure, just set out from your home airport in a GA aircraft and try to go there with minimal flight planning.

Personally, I enjoy using the bush trip missions from Neofly to chain the legs together as I go until I end up at my destination.

The other day I went Island hopping in the PT-17, landing and taking off on every grass strip and local airfield I could find. That is even more fun in VR.

These are the flying styles and approaches to pick where to fly that I use, sometimes influenced by whatever scenery I bought recently or downloaded from flightsim.to

Sightseeing the big picture: fly a fighter jet because there is so much to see and it would take forever in a slow aircraft. fly along coastlines, tour the grand canyon, fly over mountain ranges (the Rockies, the Alps etc.), close to the mountain tops. Work your way along the coast of entire continents.

Sightseeing cities: fly a helicopter to fly close and slow and see things up close, enjoy add ons with landmarks and photgramtery cities. I love the H135 and H145 by Hypeperformance Group, look for landable helipads and practice landing on them. You can do these flights in GA fixed wings too but nothing beats the visibility and control of a helicopter for really looking at things close up. I’ve bought all the landmarks and city packs and love to fly around looking at cities.

Bush flying, follow rivers, practice short take offs and landings, visit little grass fields. Take off near the Grand Coulee dam for example and follow the Columbia river down to Wenatchie WA. Orcas Island, Friday Harbor, Alaska, BC, Canada, and PNG are favorite places for me. Flying the Kodiak 100 as of recently.

GA practice, pick a specific aircraft to learn, practice circuits, stalls and recoveries etc, practice start from cold and dark, learn the autopilot. Pick a few different airports to become more familiar with and fly to and from them repeatedly. Doesn’t have to be your local airport you can adopt a more interesting one if needed. I was focusing on the Cessna 208 but now I’ve switched to learn the Kodiak.

I’ve been flying the capitals of the world in the FBW320 over the last several months. Started at East Midlands (my local airport, and flew to Paris, and then from there, flew to Berlin, and so on.
Below is my list I’ve done…

Try flying around South America. The scenery is fantastic.

This morning’s flight into L05 (Kern Valley) nestled into the Southern Sierra Nevada mountains, just east and south of Bakersfield. The strip is located just below the slightly visible double rainbow. 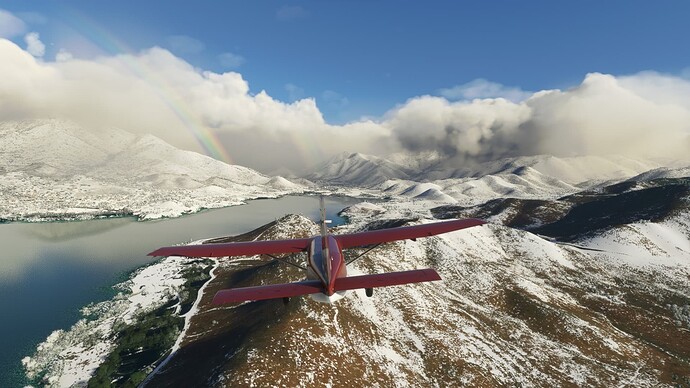 To Visit some of the included MSFS handcrafted airport could be an idea !

@RossiZwift that link is fantastic. I have been exploring and love the challenges. Thanks for sharing

So did you discover some new places and destinations, that are worth to start the engines?

I’ve gone to the website Flightradar24 for ideas. It will show you every airplane in the sky at that moment. If you click on the plane it will give you the aircraft type, departure, and destination.

One thing I try to do once I land in a virtual city is to take some moments to learn about that city/country/culture, there’s lots of “walkthrough” videos of almost any city in YT, and more often than not I find myself hooked on to something: a new dish I want to try, a snippet of History I didn’t know about, a few words of that language… treat your virtual travels like travels and you’ll be surprised how much you end up learning.

I do similar. When flying low level I also plug in bushtalk radio and add POIs along my route.

@RossiZwift i did yes thanks. I am into short flights to master VFR flight rules. So I use the navigation system to get me there and then practice and then land manually.

I want to learn to fly you see. So anything in flight planner that has no ILS or VNAV is where I want to be

Well, I’ve had a busy day which trying software and research! - initially I installed Neofly and was impressed with the level of detail and spent some time reading the guide and on Youtube. I initially thought it was great but after a while when I wanted to fly some other planes in other areas that seemed a little harder. I don’t really want to go into full management mode and want to fly more and thought I’d fly around the USA a bit more but I didn’t have the money for a bigger plane and didn’t really want to pay (virtual) money to move me (the pilot) over to the USA.

I have just purchased and tried Skypark, only done the tutorial flight (been a long day so far) and from first glance it looks great, it seems I can fly anywhere with any plane without penalty.

As I said, I have only done the tutorial flight so I am not sure if there will be enough detail overall as there is a lot less content than Neofly, but I think it is more what I was looking for.

Thanks for all your help - I’ve got lots of places to explore now!

SkyPark is definitely a pick any of these flights here and fly in want you want. None of that plane manage stuff ! And has a really nice UI

I’d started putting this together for myself…