So me and @CuzDawg3 were up to no good again. This time, we decided to fly Caravans and what better place for that than Western Papua? OK, maybe PNG, but you get the idea. And, of course, we had to fly MVFR because FUN.

I’m sure by now most folks have at least tried to land at Bugalala, but have you tried taking off? That should be a challenge, too. Especially in this sort of weather (sadly, didn’t get one of the frequent lightning bolts in this pic). MVFR, right? I mean look, the PFD shows the sky is totally clear 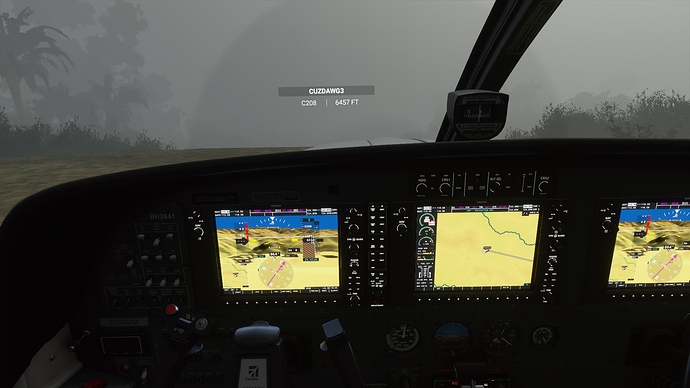 We were bound for a random airfield not far to the east called Sugapapa. The flight mostly involved trying to stay out of the “cumulo granitus”. 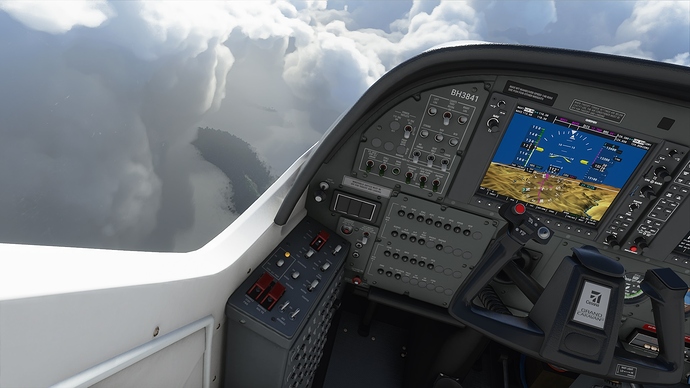 As it happened, Sugapapa turned out to be paved AND was also under a narrow hole in the clouds. The hole was just wide enough to allow a “tactical circling” approach, spiraling tightly down directly over the runway. See, totally a VFR flight 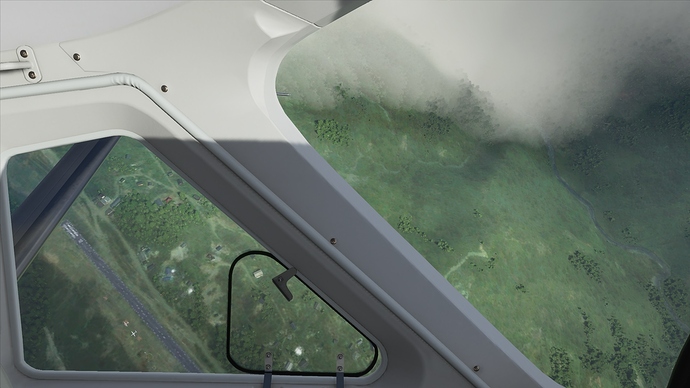 Once safely on the ground, we looked back the way we’d come. We didn’t just fly through that, did we? 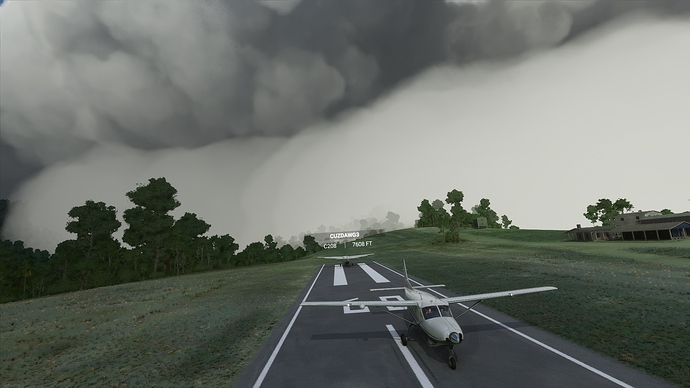 After this, @CuzDawg3 looked at the map and decided the south coast of Alaska looked suitably MVFR, so we went there to chase the bears around. Turned out, it was a fine regular VFR day with a high clouds. And we found the bears easily enough. However, figuring out how to land near them took some thoughtful overflights. Eventually we picked the best of a bad lot and got down safely. 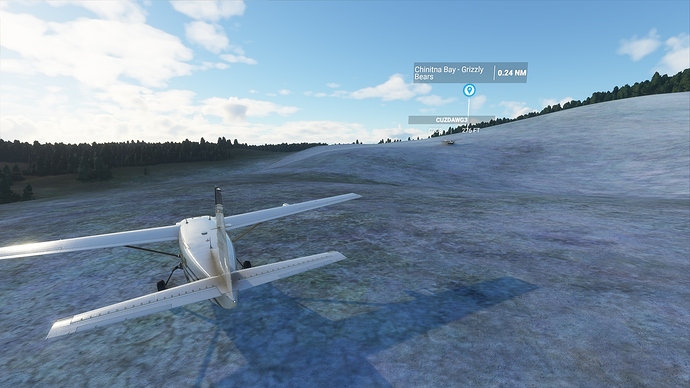 After running up to the bears and roaring with Beta at them a few times, and the bears not running away in panic, we then had to take off again. Although the visibility was better than at Bugalala, the terrain wasn’t. Eventually we decided on coming down the highest hill to a ski-jump at the bottom, and this worked fine, only minor amounts of pine needles in the landing gear 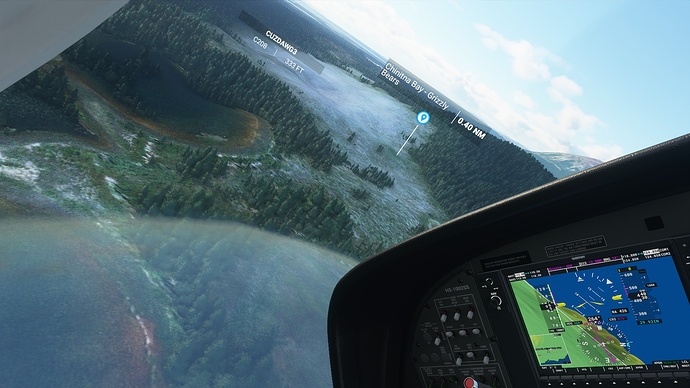 Then off we went to a nearby airfield and made a tight formation landing. 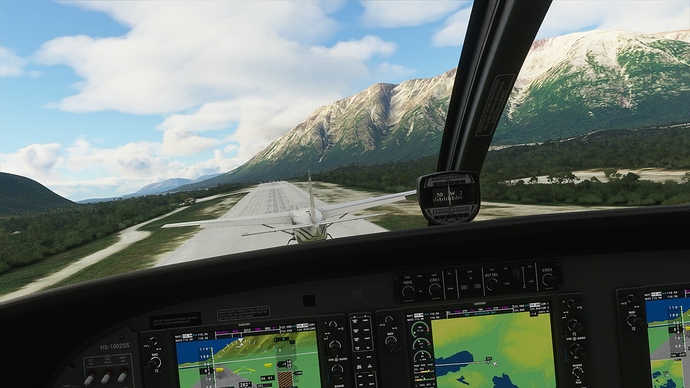 At this point, @CuzDawg3 had to do real life stuff so that was the end of our adventures for the week. A great time as always, and no other players were harassed for a change. We’ll have to rectify that next time

Great pictures!! I haven‘t flown in PNG yet, maybe a good idea to do that eventually

For the sake of safety: in reality, when you‘re not doing a proper IFR flight, never ever take that flight if it‘s marginal VFR! Never!! You WILL end up in IMC. It‘s just stupid. [/ lesson end] ^^

Here’s a few from the other point of view.

Registration = what the flap was I thinking?

And a hole in the clouds to see the ground. See? Totally MVFR.

Is that ruwnay paved? And on a ridge? In a valley of clouds? It’s like PNG wanted us to be successful!

We almost collided in the tac-descent, but somehow still survived.

Enroute to da bears in AK

Be there bears here? I dunno, ALASKA! (Target acquired!)

Or was I the target?!

The radome is NOT a venison sausage, Mr. Bear!

We gotta get out of here before I need to ducktape this plane back together! @OrigBullethead found the ski-jump, and I got a great pic of him clearing the trees. . .BEAR-ly!

It was sure purty here

Oh well, we were supposed to make left traffic anyway.

Great pictures!! I haven‘t flown in PNG yet, maybe a good idea to do that eventually

Well, technically this wasn’t PNG. We were in the western half of the big island of New Guinea, which is part of Indonesia. They divide this up into the provinces of Papua and Western Papua. PNG (Papua New Guinea) is a separate country. It’s mostly the eastern half of the big island but also some adjacent small islands, the Bismarcks, and the north end of the Solomons.

But New Guinea looks pretty much the same on either side of the international boundary. Row after row of very tall, very steep, jungle-covered mountains, very frequently shrouded in clouds. Scattered through the many valleys are dozens of hand-carved, very uneven, dirt strips perched precariously on the slopes.

These strips were laboriously constructed, by hand because there’s no way to get bulldozers in there, often over many years, by the local tribes as their only reliable means of contact with the rest of the world outside their valleys. They expect large loads of supplies, modern consumer goods, and medicine. So only go there in a heavily laden Caravan. Remember, many of these tribes have only stopped being cannibals (supposedly) within the last generation or so (after a tradition of like 50,000 years, one of the oldest human cultures outside Africa), and ain’t ashamed of their past. If you show up in a little bush plane, the disappointment of the locals might be dangerous. Just saying.

For the sake of safety: in reality, when you‘re not doing a proper IFR flight, never ever take that flight if it‘s marginal VFR! Never!! You WILL end up in IMC. It‘s just stupid.

Well, yeah, in general. But if you played by that rule in New Guinea, you’d never fly at all. Outside the 2 or 3 major cities (where you load up your Caravan), all approaches are visual-only, although you’ll almost certainly be in mountainous IMC along the way. With usually zero navaids along the way. And, because your destination, a random dirt strip with no electricity, has no ATIS, you never know until you get there whether you’ll be able to land or not. Clouds can sock in one valley and the adjacent valley can be totally clear. It’s luck of the draw.

So basically, in New Guinea, you want to fly as early in the day (local time) as possible because the clouds quickly build up once the sun rises. And expect to fly on instruments for some or most of the route, which is usually GPS direct (at least in MSFS), and also expect to use oxygen as the mountains there are quite high. Then you have to identify the correct valley, which is harder than it seems because they’re so steep they’re very closely spaced, and there are clouds all over most of them. If it’s totally socked in, abort. Otherwise, go down, have a look, and decide whether or not you can get in there.