Hey folks, first new post here.
This is the set up, odd and not pretty I know! 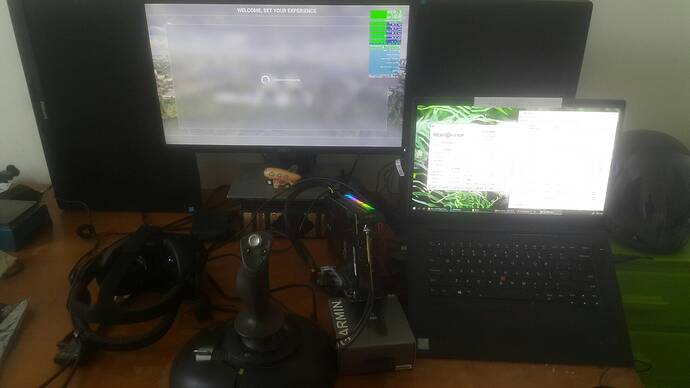 It is a 3090 patched to an NVME hard drive slot with the R43SG PCIE to NVME adapter to get the native 32G rather than the 24 odd from TB3.

The OS is on the NVME to TB3 enclosure and the sim in on an SSD in the remaining laptop NVME slot.

CPU is an 9880H so locked to 4.1GHz on 8 cores with HT off and power throttling disabled in Throttlestop. It is also undervolted and re-pasted with liquid metal so never gets close to thermal throttling.

An egpu set up like this usually suffers a 15% graphics performance penalty due to the limited 32G throughput.

I have pretty much done everything in CptLucky8’s tutorial.

I am looking for suggestions on sliders in FS2020 or OpenXR should I push up considering the silly amount of RAM and 3090 VRAM and which I should turn down considering the lower bandwidth between CPU and GPU?