Found that flying south, while in the southern hemisphere, at dusk, the sun is in the south.
Example, fly from YSSY (Sydney) to YMML (Melbourne) at 6PM, and you will have the sun in your eyes at some point.
Not sure if this is a setting I have not found, or a bug?

Melbourne is not directly south of Sydney, it’s to the South-West. True bearing is around 230 degrees. Also, it’s the summer solstice in Australia, so the sun doesn’t set in the West, but rather the South-West, at round 239 degrees tonight. Ergo, the sun will be in your eyes if you fly this route in the evening this time of the year. Not a bug.

Sorry, but your logic does not hold true, both cities are south of the tropic of Capricorn, and as such the Sun can never be to the south. I would expect the setting Sun to be to the North-West, or appear to the West. 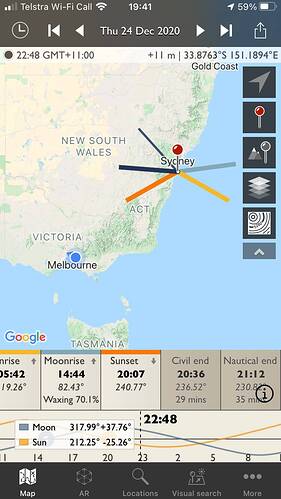 If you don’t want to believe my logic then maybe you should do your own research, but FYI, here’s today’s snapshot from Photographer’s Ephemeris. The thick orange line is the direction of the sunset, which roughly aligns with the YSSY-YMML bearing.

I am not trying to dispel your logic, but here is my research. It is largely done with numbers, and I am not a tax accountant, so I do not think they are rubbery.
The tropic of Capricorn, the most southerly path of the sun, is at about 23.44 degrees south. This is about 5 degrees north of the Gold Coast as indicated on your map.
Sydney is about 33.87 degrees south.
Sydney is always south of the sun by 10 - 60 degrees, depending on the season. The Solstice, when the sun is most south, was 2 days ago, so we can use the 10 degrees if you like.
As your map suggests, Melbourne is about 381nm southwest of Sydney. This would suggest that the sun at any time would be north of the flight path. At dusk, assuming the sun would appear to be almost due west, it would still be about 40 degrees or more to the starboard side of the aircraft, and not in the pilots eyes.
It is interesting that you application seems to suggest that the sun sets near the south pole, about due south of the middle of the Indian ocean?

What you’re saying is true at midday, but we’re talking sunset. Here’s an astrophysicist explaining it (skip to around 4:50 if you’re in a hurry).

Well, in the northern hemisphere the closer to summer solstice we get the closer to north the sun sets. North of the Polar circle it does not set at all but gets closest to the horizon at midnight, so without any numbers just turning the world upside down I think Asobo has this right

I dont know the right answer, but imagine the earth tilt at solstice during sunrise and sunset.

Hi TapetalKitten,
Also thanks to gue63.
This has been and interesting look at the path of the sun, and the Earth, and the relationship between objects in space. Just like these, it is one’s viewpoint that affects how we each see it.
I have no argument with the sunlight affecting the polar regions, both north and south, but at the end of the day, the alignment of the Earth’s rotation, and the inclination of the axis of it’s spin, still suggests that the relative path of the sun is between the Tropic of Cancer in the north and the Tropic of Capricorn in the south, these being about 47 degrees apart, straddling the equator.
Yes, the sun is quite some distance from us, and it is somewhat bright and its light is defused by our atmosphere, and as such generally the light is not seen as coming from a point source, but the bit that shines brightest is still within the equatorial regions.