I’ve been reading in quite a few topics that, even though supersonic flight is not yet supported, there are work arounds to make aircraft stop shaking once they get to high / supersonic speeds. The only thing I fail to find in any topic or the SDK, is what the exact workarounds are.

Can anybody tell me what I have to do to make my aircraft fly supersonic without flipping the f**k out?

I fly supersonic with F-14, it is possible, but aircraft become quite unstable. With unstable I mean hard to maintain leve, it goes +/-10.000 ft/min, really hard to settle it around 0 ft/min. Under M1.0 it is easy maintain altitude, I know it can’t be 0, but +/- 300 ft/min is acceptable.
Don’t know how it is in real life conditions, but 90% I am sure it is not that unstable.

For the F-14 (and the same studio’s F-15), trim control is critical. You can also enable the autopilot to hold the altitude if you like. Yesterday I took the F-15C up to FL510 and Mach 2.45 and managed to control trim entirely manually to within +/- 500 fpm. It’s doable if you’re patient.

That said, this is something that @DEAN01973 might be able to offer insight into, as his upcoming Concorde will be his third MSFS supersonic aircraft, and this one needs to maintain stable supercruise for literally hours at a time.

Hey thanks for your reply! The problem I have is not about keeping it flying level as such though. It’s that the whole aircraft shakes like it’s having a seizure or something. I’ve seen that the Eurofighter doesn’t have this issue, I’ve just not really been able to figure out why

That doesn’t happen to me at all, with either the F-14 or the -15, and I’ve had them but above Mach 1 many times, and both of them at Mach 2.3+ more than once. This sounds like some kind of controller issue or some Assistance option trying to interfere with your flight.

EDIT: It does occur to me though that if you’re trying to go supersonic at low altitude, you WILL be affected by buffeting, which may be what you’re experiencing. That is entirely realistic for most aircraft.

No, don’t think it’s any of that. With exactly the same setup, things like the F22 and the Eurofighter fly just fine at over mach 1. And it seems to happen anywhere up to 20.000ish feet. From there it doesn’t happen but that’s also because at that altitude I can’t make my jet fly over mach 1 anyway

Even though I’ve set everything up according to the real jet, it seems to get stuck around 500 knots. Even in a straight-down dive it doesn’t speed up further.

That really doesn’t sound like normal behavior. The F-14 should be able to break Mach 1 easily and without undue buffet or instability at 20,000’. Are you sure you don’t have some “Assistance” or AI piloting options turned on and have the aircraft trimmed correctly? I don’t have the Eurofighter, but I do have the F-22. It’s fun but feels way more like an Ace Combat arcade jet than flying a supersonic air superiority combat fighter.

Agreed, I feel the same with the current fighters that are out. I’m working on a fighter as well and I’m really focusing on getting the flying to feel realistic, even if that means that the numbers to match 1 to 1 to the real figures from flight manuals.

Anyway, I seem to have fixed it by changing the reference speeds. Overspeed is now set at a little over mach 2 and the shaking doesn’t happen anymore.

Next problem is, how the heck do I actually get my jet to reach mach 2…? There’s some sort of limit that stops it from getting there. Like, it’s speeding up rapidly to 500ish knots and then the speed just freezes.

How much do you know and understand about aerodynamics and compressible fluid mechanics? Because these are real issues with supersonic flight IRL. Don’t know how the sim handles (or doesn’t handle) this stuff, which is why I tagged Dean from DC Designs. I have an undergrad degree in Aerospace Engineering and based on my educated “instincts,” the F-14’s behavior feels very correct. The speed of sound changes dramatically with density (which means basically altitude). At sea. level, no airplane in the world will exceed about Mach 1.3 due to the density of the air. Try climbing for your max speed runs, and don’t focus on the IAS (indicated airspeed). Pay attention to True Airspeed (TAS) and the Mach meter. You’ll find the F-14 is quite capable of Mach 1 from at least 10,000’ if not lower, and Mach 2+ at some point below FL300. If you have the plane loaded with external tanks and weapons, the extra drag will drastically limit maximum speed attainable.

I am not expert in aerodynamics, but I know some part of it.

I know when aircraft is in transonic speed it have tendecy to nose drop, that happens with F-14 in FS, that is correct.

Probably best not to compare anything to the Eurofighter. I’m more than certain that this particular Dev and that particular aircraft are not modelling flight characteristics with any attempt at realism.

It trims out okay here, sounds like something to do with controller set-up or something. The faster you go, of course, the more responsive the control surfaces will be including trim - I had the F-15s trimmed out at Mach 2.2 in the videos I posted so it’s definitely possible, just takes some fine work is all

So I did a test in the F-14 this afternoon out of PHNL headed south-southwest … Hit Mach 1 at under 10K feet, though I didn’t particularly try to go very fast very low.

I trimmed it out level at a little over 11,000’ and Mach 1.1, 629 kias. At this point, the aircraft still had close to 50% internal fuel and in the dense air, airspeed was increasing very slowly. 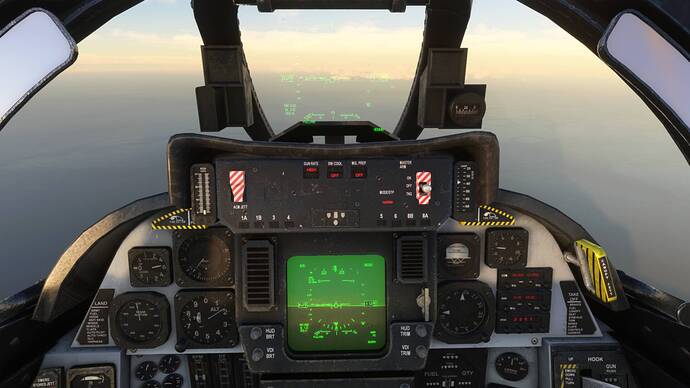 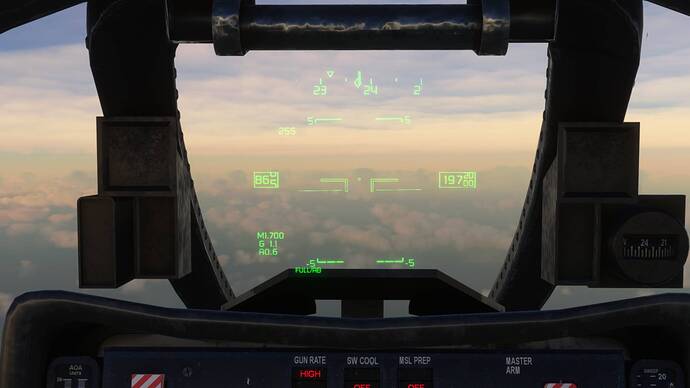 Finally I put on the autopilot and climbed up to the maximum ceiling. With under 20% internal fuel remaining, I maxed out at an absolute ceiling of 49,970’ and Mach 2.426, 903 knots indicated. 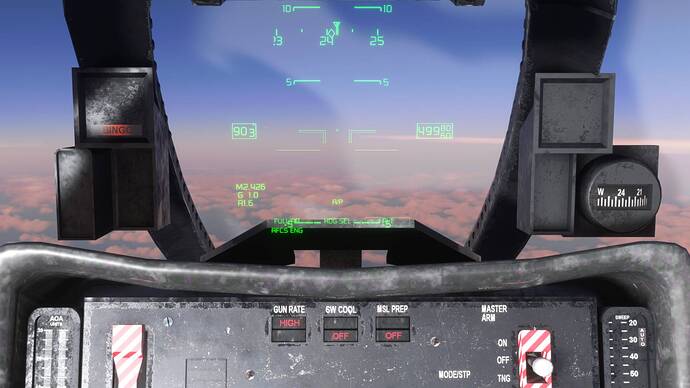 That’s 1,349 knots across the waves, with a true airspeed of 1,362 knots with the quartering headwind. 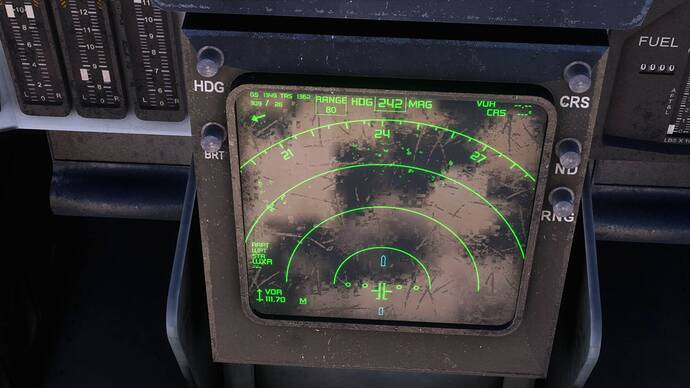 Not bad for the old girl.

I then turned back toward Hawaii but didn’t trust the fuel remaining, so I “refueled” in flight, to make it home. Came west of Oahu and made a long straight-in east approach. I landed a bit fast, bounced a bit, hit the spoiler to kill the airspeed and set it down … but my spoiler toggle is the same three-way switch that controls my gear. When I went to raise the spoiler, I accidentally retracted the gear and crashed when I recovered from the bounce before I realized what had happed. Oops.

They must’ve applied the work around that I keep reading about in other posts. It’s just strange because my jet basically happily speeds up to mach 0.95 but then it just stops accelerating instantly. Even though I was still speeding up with roughly 5 knots a second. It just stops at that exact point every time. So there must be some sort of coded speed limit there.

I’ll make a video showcasing it.

@LameLefty Haha, well, I know nothing of compressible fluid mechanics and I hardly know anything about actual aerodynamics. All I’m doing is changing numbers till it just feels right, if that makes sense.

Here you can clearly see the speed rapidly climbing to mach 0.952 and then stopping dead. The jet clearly has more to give but somehow gets stopped in it’s tracks on the journey to supersonic flight. This was at 35000ft.