I’m trying to do some finishing touches on my first airport project and I’m very annoyed that I can’t seem to get taxiway lighting to work. It could be an SDK issue or some error on my part, I’m not sure.

A few select sections have added taxiway lights, on one side, but both sides are selected. To be clear, the entire taxiway system and all paths have both sides selected, but it has only appeared on one side in a few sections. In all cases the lighting that has generated is on the side of the taxiway opposite the runway.

The way my airport is arranged, it’s a simple single runway with a single taxiway parallel to the runway, which connects to the runway at both ends, and one connector about the middle of the runway. Very simple and typical for most rural airports that are a notch or two above a bush strip.

On one end of the taxiway, I have it as the outer edge of the apron, so on that section I want no lighting on the apron side to avoid the little light fixtures to run over, and that oddly is one of the few sections that will generate lights…

I would appreciate any ideas on this. I generally figure out stuff over time as I kinda learn this in a haphazard figure it out as I go process, but this is one of a few issues I can’t seem to sort out alone.

If you mean taxiway edge lighting use the LightRow Object to place your taxi edge lights instead of the taxiway point themselves,Use those for centerline lights.You can search lightrows here in the forums and im sure youll find a post that explains it better if you dont understand it well

Well, not exactly what I had in mind but it was very helpful, thank you.

I didn’t know about the LightRow object, but now I’ve used it I’m afraid it is frustrating on it’s own so I’m not happy with the results but I’ll keep working on it.

At first use there seems to be no logic to how it places lights, some seem to be where the nodes are and others spring up wherever they like along the path, so having evenly spaced rows and pairs in line with each other is either going to be impossible or going to take me several hours to manually fidget with and eyeball by hand. There are no properties to adjust so I’m assuming I’m stuck with whatever spacing it does.

I also don’t seem to be able to get a consistent first light, the fist node can either have or not have a light, yet I might have a node with a light and then another not on a node a few feet away…so I have haphazard randomly spaced lights. I’ll work on it.

The method I was referring to is you can specify in object properties on the taxiway path (not path node) the attributes of left and right side lighting, which seems to automatically place lights in an evenly spaced manner along the edge of the taxiway. However in my use, more often than not it didn’t actually do it. What few places it did, it looked good with an evenly spaced row of blue lights along the edge. But like the LightRow object, there does not seem to be any logic behind when it would or would not work.

for those light rows you wont actually see the real light rows while in DEV mode . For some reason it only shows you the correct light row after you build the package and move it to the community folder .While in the scenery editor it will just look weird . So just place the light row in dev mode along the edges you want the lights to appear and then save,build the package and then move to the community folder and youll see it correctly

Thanks, I’ll rebuild and see.

I did figure out there was some logic to the nodes in the editor.

Seems the key is to use as few as possible and you can occasionally insert one to reset the spacing which will pop in an extra light. For example when there was a connector on one end, a node will line you up with the opposite side again once past the connecting taxiway. It takes some adjusting.

I put in too many nodes trying to trace the edges of the taxiway and it appears all you need is one at each end of uninterrupted line, and be sparing in any corners.

Yeah after a rebuild it screwed the spacing all up. I had it looking nice in the editor, now it’s all over the place. 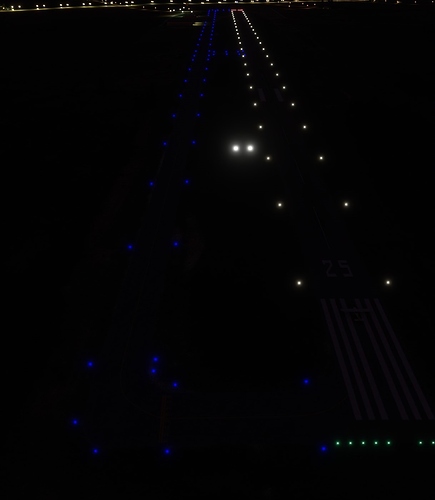 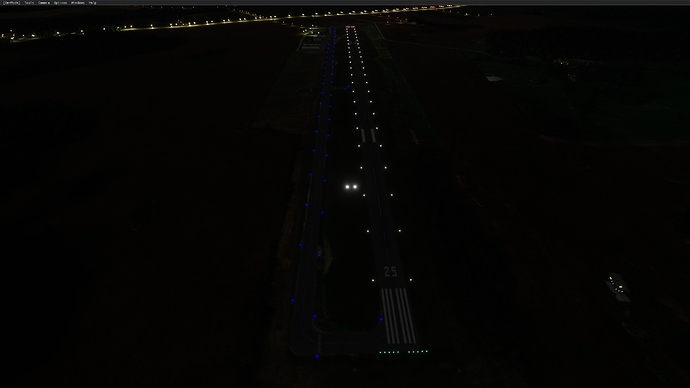 yes sadly thats how it is .Cant really change it

[GUIDE] How to create a new airport (version 0.3) SDK Archive

In order for my taxilights to be displayed in the correct locations (when package is loaded into the sim after it is built and moved into the “Community” folder), I did some experimentations and observations, and this is what is working for me: Little history: A LightRow needs to have at least 2 points: When you are working on your project, one point will have taxilight, and the second point will only have a point (without taxilight). When I was initially using LightRow to generate taxiligh…

Thanks, I did it by that method and it turned out nicely. Basically just set up all straight stretches with parallel LightRow objects and used little short ones for connectors and around corners to put a single light where I wanted one.

A few places it looks like I may have ended up with a few a bit close together, but they are near intersections which would make sense. Looking at the light spacing at the airport in Google maps, it looks like they space them a lot tighter around corners IRL.

How it looks in DEV: 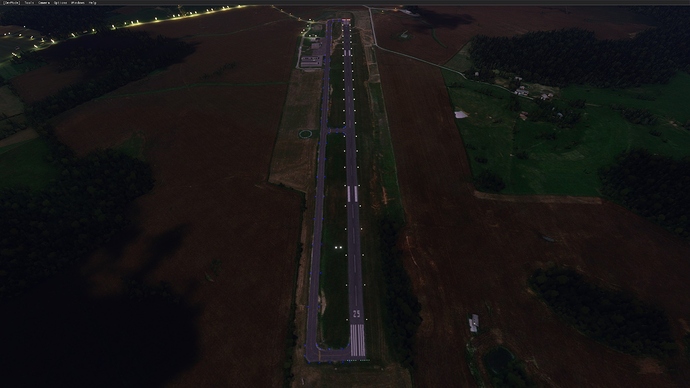 Just to let you know had a little more luck adding taxi edge lights by making a point at either end with the lightrow, then right click on the line and click subdivise. It spreads the points out equally, just click in between points where you want to divide the line up, then just drag the points to where you want them.

That looks great! It didn’t take me long to figure out that LightRow are vastly superior to selecting left and right edge lights for the taxiways.