Are there cowl flaps on the TBM? I know it’s a turbo, but don’t know if those need that type of cooling.

No, just an inertial separator for FOD/ice ingestion.

Is there a way to assign the inertial separator to a button on a control. I can’t find and entry for it in the controls section.

Not that I know of. It’s one of the few buttons / switches I must click directly in Virtual Cockpit.

Inert Sep is something I leave on most of the time. RL checklist says enable it at T/O and Landing phases, but since I’m usually at max alt enroute with the TBM, it stays on even though you take a bit of a performance hit.

I guess it’s more than a bit of powerloss when leave it on. When I do a full power take and forgot to reduce power during climb, torque is rising up to 10% including going in the red when i Switch of the inertial sep.

RL checklist says enable it at T/O and Landing phases,

The 930 manual I have says for take off:
”INERT SEP” switch…As required

You can do what you want with the Inertial Separator in the sim as it isn’t properly modelled.

In real life if you leave it on unnecessarily you will derate your engine and make it run hot.

And no, there still isn’t a button map for it, so you have to reach for a mouse to turn the thing on right in a critical phase of approach while hand flying.

I’ve not looked to see if there is a SimConnect option for it. You might be able to control it that way.

so you have to reach for a mouse to turn the thing on right in a critical phase of approach while hand flying.

98% of the time you’ll want the separator on under 4000 feet when on an approach, it isn’t that difficult at altitude.

Normal TBM operation is to have it ON for landings and take-off - you’re not going to redline the ITT having the bypass engaged unless you’re sitting with it on the ground for a long period of time, and that’s only because there’s just not enough air available for cooling. You’re also limited to 200kts with the separator engaged, for the same reason.

In the PC-12, we used to close / open it as part of the 10k foot check. Open below 10k ft, closed above. Don’t know what common practice is with TBMs.

Cowl flaps are air outlets that can be opened / closed by the pilot and regulate how much air for engine cooling flows out through them, thus regulating cooling air flow. This is used with “high performance” engines, in order to keep engine temps (cylinder head temps) in a certain range. You will only find cowl flaps in piston aircraft. An aircraft with cowl flaps always must have corresponding temp gauges, such as CHT. Turboprops give you ITT (interstage turbine temperature), which has to do with engine internal gas (exhaust) flow.

I was fortunate enough to go along on a TBM trip. If I recall correctly, it is always used on the ground and for takeoff. Turning it off was part of a 10,000 foot check. Came back on at 10,000 ft on descent.

I have about 150 hours in a Cessna 182 (private pilot with instrument rating) …an 07 with a G1000. Cowl flaps are a must operating this aircraft…so in my sim build (keeps changing) I decided to build a full size cowl flap control. It is exact full size. The solution to making it work is with a Desktop aviator usb interface and a dpdt joystick from amazon. The action inside causes multiple switch toggles creating switch operations …1 for opening…1 for closing each being toggled and reset during the movement of the handle. Works great with anything that has cowl flaps. My checkmate card I use in the real plane works great for the sim and has the cowl flap operations listed when needed such as
“Climb”
85-95
Throttle -23" MP
Prop - 2400 RPM
Mixture - 15 gph or rich
Cowl flaps- Open
etc.
I will post some pics.

Not sure why but it will not let me upload a picture…something to do with new user…Well new to the forum…not to msfs. Have practiced instrument approaches for many many years with msfs. I found out in advance where my examiner was going to take me for my IFR check ride and I did it so many times in the sim that I probably could have done it blind folded… He did ask afterwards if my CFI had thrown the changes he did at the last second at me in training and I could actually answer honestly no…and he did check my log to verify none listed at that airport.
And in a 172 sp with a 6 pack…not the piece of cake G1000.

And the TBM…thats a turboprop. You open the cowl flaps on decent in a 182 from 10,000 you will shock cool your engine and get to watch your oil pressure drop to zero as your cylinders crack.

There is a student video from daher about the use of the inertial seperator.

It answers some questions here. 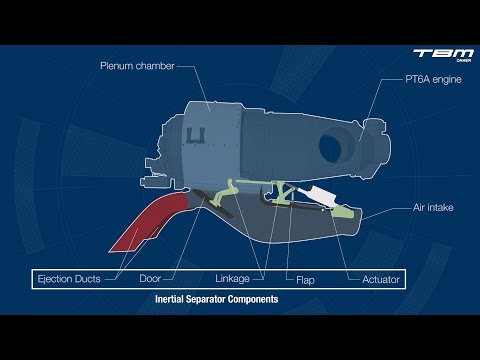 Turboprops don’t need and don’t have cowl flaps.
I don’t know why you are posting a link for the inertial separator.

There’s a local dairy in California called “Berkeley Farms.” Their advertising, for years, was, “Cows? In Berkeley?” (There’s not one square inch of farmland for miles in any direction.)

I couldn’t help but think of that when I read the title of this thread:

“Cowl flaps? On a turboprop?”

To clarify, if not already mentioned: