That refinery in Vienna looks so bad, however New York that theoretically loads more, look at how it looks, the buildings look pretty good, compared to the Vienna refinery it looks very very good, I don’t know why that refinery was looks so bad. 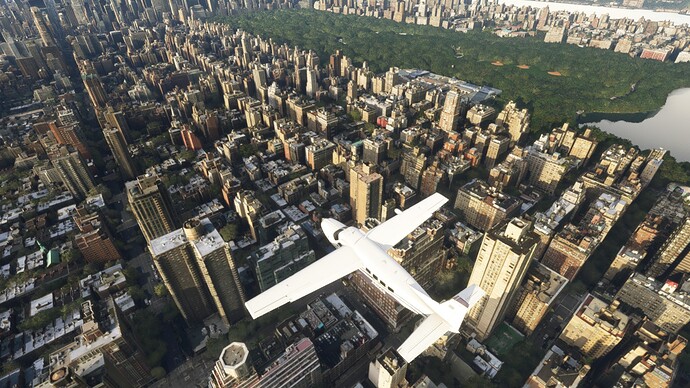 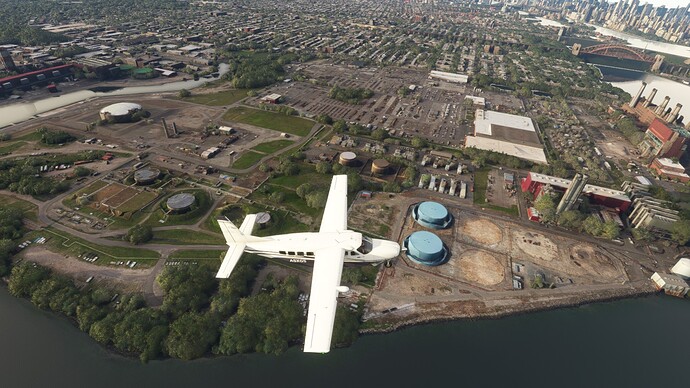 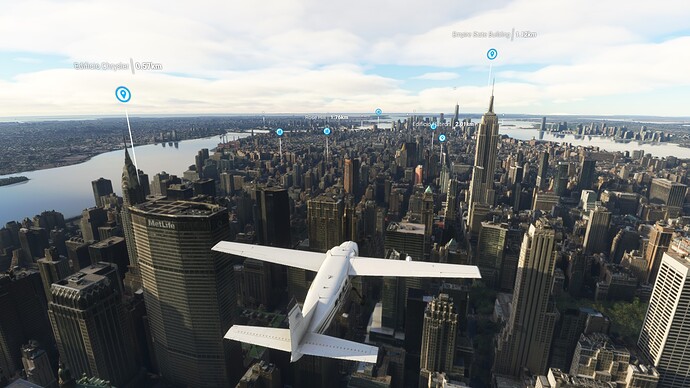 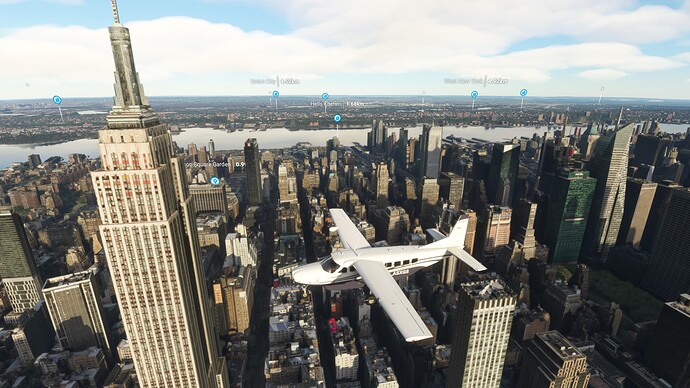 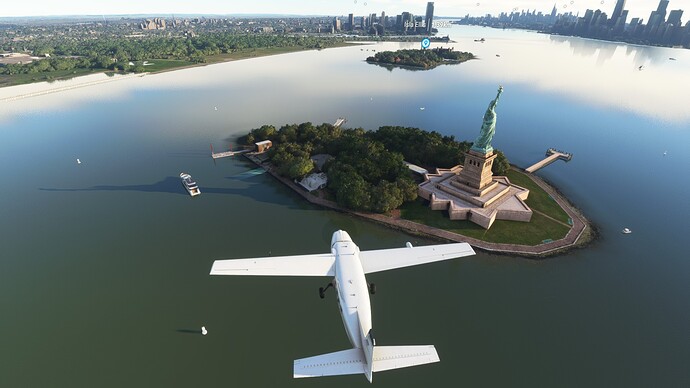 The difference is enormous, the view of New York and that of that refinery

great, so you cannot even defend yourself from trolls, fantastic…

If a post violates the Code of Conduct, there is a flag option under the post with several options to choose from.

You can also ignore or suppress users in one of two ways.

What about bridges? they look pretty bad in my computer

Wish New York still looked like that for me but ever since WU6 every PG city looks like melted blobs, with the exception of hand crafted POI’s.

II have tried all possible settings. Bing map off and on ! Cleared cache. Created again. Uninstalled and reinstalled content manager worldupdate. But Vienna takes an extremely long time to give a nice picture. The Donaustadtbrücke looks as if lianas are hanging and some water points on the Danube have strips or edges (1x or 2x) Berlin does not look like this. Do you have any tips? Maybe reinstall?

You can do everything you want but it wont change. Because of the weak data which are provided

Above 1500ft it’s acceptable, below 1000 it looks rubbish and that’s all there is to it because there are no magic settings. I expect Vienna is due for an update but any such fixes are never going to be instant especially when there are so many other areas still waiting for their own World Update… If you are local then all I can say is be grateful that at least you have photogrammetry as there are still plenty of major cities that don’t … and at the end of the day if you really can’t live with it then PG can be disabled in data options.

Something really strange it’s happening here on my XBox. Since I’ve lived in Vienna for many years, as soon as the World Update had been delivered I’ve checked the Vienna landmarks and the photogrammetry was missing.
After a couple of days, suddenly the problem disappeared and the city started to look pretty nice, as it supposed to look.
Then yesterday I’ve tried to fly in Vienna again and the photogrammetry was not available anymore. Munich still looks good, but Vienna looks like a generic european town.
Is there any problem with the MS servers?

PG is still there looking as good (or bad) as ever. Check your data/internet settings. 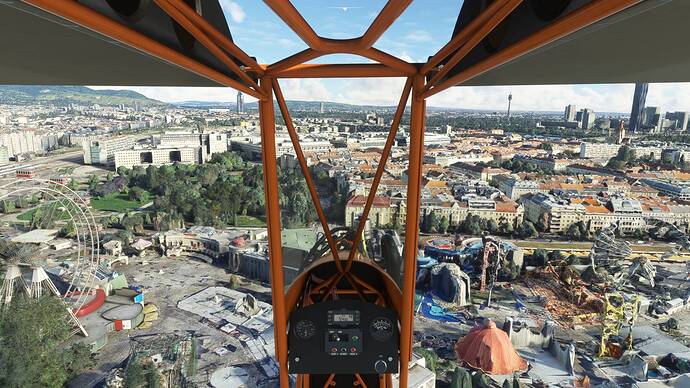 There are problems all over.

London and Paris are particularly bad. Paris has a huge chunk of land missing that suddenly pops in.

You’ve got Vienna of course.

San Francisco has less loading issues but the hills morph and I’m pretty sure the houses in the hills by San Rafael are wrong as they look like an explosion has scattered them.

Miami is better but there’s micro stutter all over the place.

New York is hit and miss depending on what day/time you fly. I also noticed when flying at night by Newark the bridge to the right of the runway has skyscraper lights on it on the solid piece underneath where there should be space between bridge and water.

It’s by far the worst I’ve ever encountered and I’m sure there’s either a loading/streaming issue with the data or a server problem.

Specially the „Prater“ you are flying over ist a terrible wasteland🤢 Jorg said, that it is hard to choose from the many POI for each city, but that they didn‘t make this special area look good is just poor

By the way, leaving in Vienna was amazing. The real nightmare is that, after almost 10 years, I had to leave the town to move back to my country. That’s why I’m always flying there… Please help me to restore the photogrammetry!!!

In Munich the photogrammetry was available even though I’m not sure it’s part of the World Update or not.

It’s not. Munich had photogrammetry from the beginning. Can’t help you with the rest. The only thing you can try is reinstalling WU6 from the content manager. Not sure whether photogrammerty is affected by that though. Still easily done and worth a try.

Do you have cache settings on XBox ? I’m a PC user, I don’t know… but if a PC user would have this issue, I’d suggest to delete and switch off the cache. I find it strange the problem returned.

Please help me to restore the photogrammetry!!!

like London and Amsterdam, PG needs a complete makeover in these cities. You don’t miss much if you don’t see it.

like London and Amsterdam, PG needs a complete makeover in these cities. You don’t miss much if you don’t see it.

Not sure what you are talking about, but my Vienna PG looks phantastic even from very low fly-by.
And I should know, as I live in Vienna. And I can tell you, it looks great in the sim.
(as long as the servers are not hammered with tons of ppl flying there at the same time).

As for the problem of the OP:
Not sure how it works on the XBOX, but on PC my 2 first steps would be

In general I suggest to avoid flying wnehn and where everyone else does, as this can give very low PG quality even on the best systems.

There’s a “Rolling Cache” and I have already tried to cancel it. The game reloads the cache at once, before exiting from the Data menu, but after that nothing changes.
Photogrammetry, when it was available, was not bad. I still have a screenshot of the building in Rennweg where my flat was located. Not easy to take a picture from the plane but good enough for a melancholy night.

All in all, I must admit that the XBOX is quite cheaper than a PC, but it’s not the best solution to play FS2020. I have to reset the game dozens of times each day because the HOTAS ONE X and the mouse stop working… Too many bug here and there. I barely call it a beta.

In general I suggest to avoid flying wnehn and where everyone else does, as this can give very low PG quality even on the best systems.

It happened sometimes to wait a lot for the photogrammetry to be loaded, in Vienna as well in every other town where it is available, but what looks incredibile to me is that it’s missing in Vienna only… Or at least Vienna is the only town where it happens. New York, Munich, Paris, London are always available (actually I had a problem in London too a few months ago…).

Vienna photogrammetry is back, again…

Nice work. You might consider to upload it to flightsim.to
There is actually already one EDDN scenery using the google data too, but it looks even more apocalyptical and has some performance drawbacks.