The absolute state of London

the new photogrammetry cities are pathetic compared to existing ones 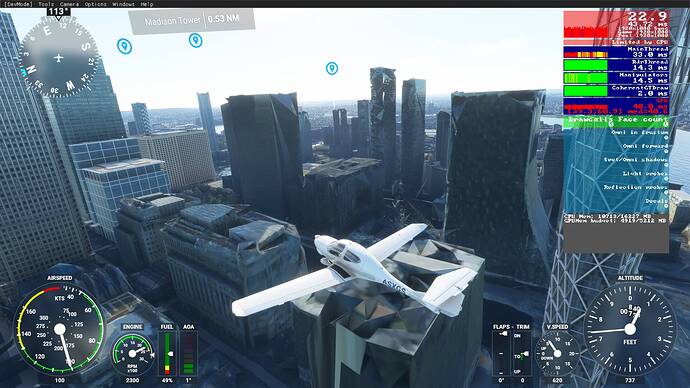 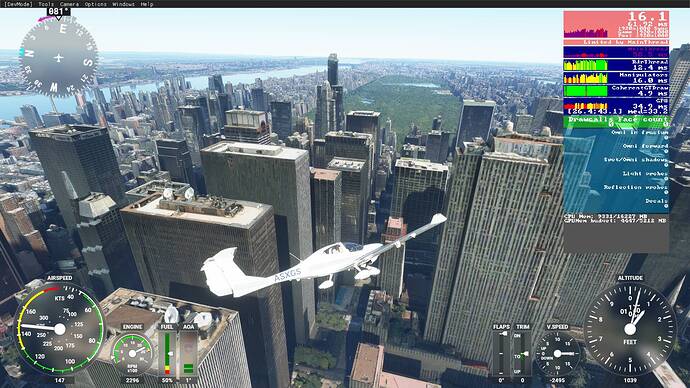 That does look pretty bad, but is it supposed to look amazing that low to the ground? What does it look like at reasonable flight level?

Something is broken somewhere showing you bad PG data. You’re not alone in this, as others have reported it as well. And yet others can’t fly over London with PG enabled without a CTD.

It looked good for me when I flew over it, but frame rate was atrocious, and PG data looked like yours until I was pretty much right on top of stuff. Then the final LOD would load it making it look good. But from a distance, it looked like a post nuclear war apocalyptic landscape.

Other have posted screen shots of the London PG and it looks fabulous. So not everyone is seeing this.

To be fair, it shouldn’t look quite as bad as that…

But I’m with you - the mentality has changed completely. People fly their aircraft into what would be the ceiling of a GTA-like game, and then seem to think they should be getting the same visual quality.

I’ve seen better than that on my computer but I agree it looks worse than other PG scenery.
My last flight was near San Diego and I thought, let’s take a look and to my surprise it looked much crisp and cleaner than London.

I agree. I also would like to not have green highways. That would be a real improvement. Maybe one day…

Delete your cache. That is what is causing this most likely.

What does it look like at reasonable flight level?

When you fly New York or London at a level that is allowed… you won’t see much of the photogrammetry buildings anyway. For me, the fun of MSFS2020 is flying small airplanes low altitude… 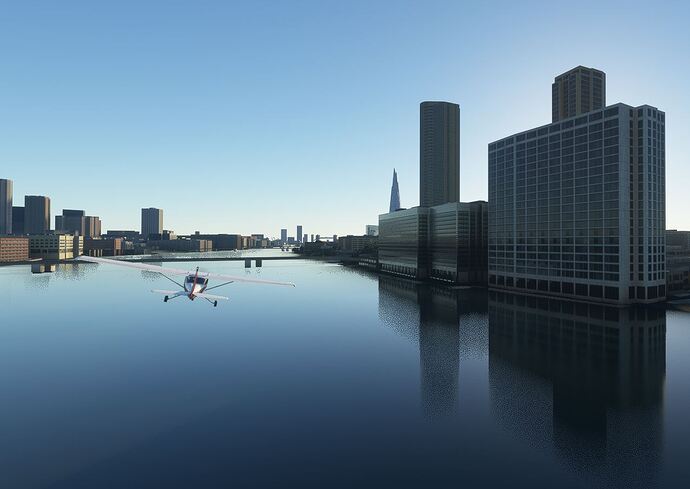 I think this is a Vram/ram issue. Altough i agree that london doesn’t look as good as new york, They both look better in my sim than what your pics showing.

I wen’t from 16gb to 64gb of ram and the first thing i noticed that the photogrammetry loaded much faster to their heighest detail.

Here’s how it’s looking at my end. About the same spot as your picture. As you can see it’s using 23GB of ram. So i’m almost sure there’s the difference. 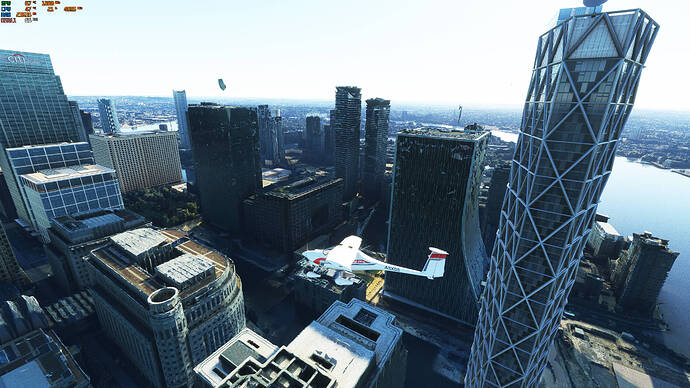 Turn photogrammetry off its a mess 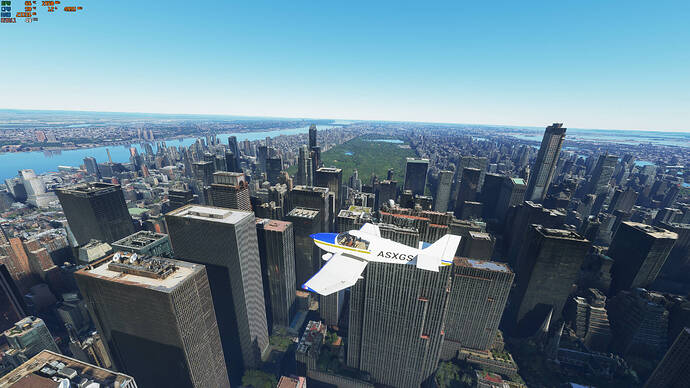 yeah, i went from 16 to 32 gb and noticed a huge difference. Now i’ve installed it on my work pc (64gb) and it’s even better now. So it’s kinda weird how the amount of ram is effecting the photogrammetry. Because even with 32gb it should be fine cause you’ll never us more then around 25gb in total. So looks like msfs needs ALOT of headroom for photogrammtery to work properly

I’m not sure why RAM would make any difference. If it was the problem I’d be getting poor PG elsewhere. I’ve only got 16GB and London looks as good as New York. Terrible FPs over London but thats a separate issue. These shots were all captured on my PC. My theory is the bad London PG some people are getting is caused by over load on the servers as everyone is streaming the same area. I’ve tried multiple times to download London to my hard drive and each time my entire game crashes. Which may or may not prove my point. 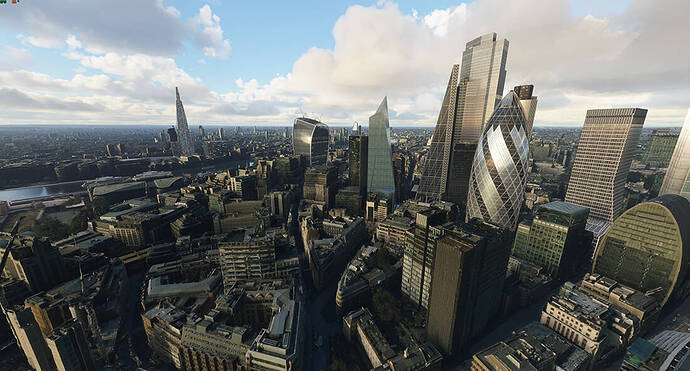 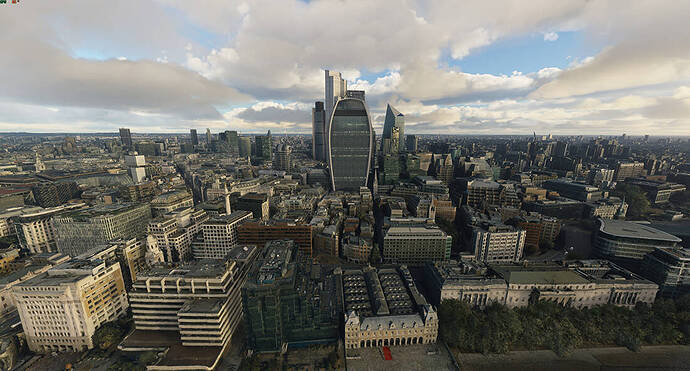 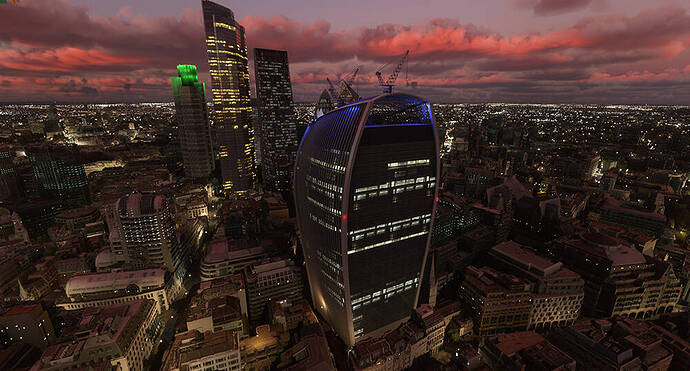 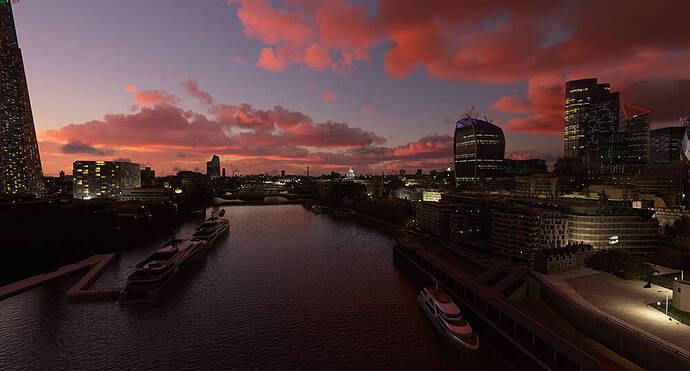 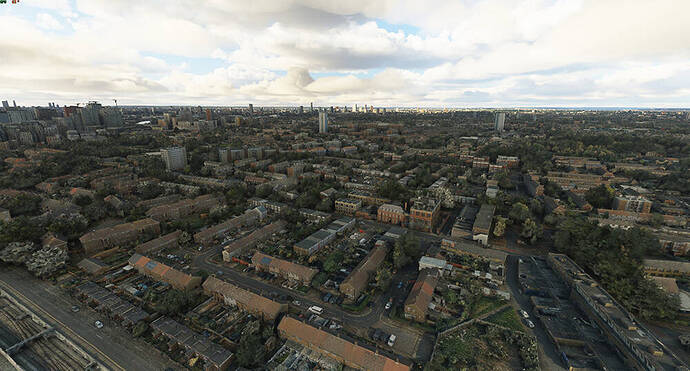 Well, his new york and london screenshots are noticably worse then mine? Mine is using 24 gb… His is using only 10… So

Edit: sorry i misread your comment. Thought you had the same issue.

But when it’s a server issue, shouldn’t eveyone have the same isue then?

I have found the London scenery to slowly get better as the sim streams some additional assets.
Yes, photogrammetry seems to rely on RAM to lead all this data into the sim and swapping the data as you fly and its mostly related to the memory bandwidth.
As for server, they are being hit by tons of people to grab the latest data so i can assume they will work better for some and worst for others

But when it’s a server issue, shouldn’t eveyone have the same isue then?

True but by the sounds of things most people are having issues of some description when flying over London. Either PG loading poorly, abnormally low FPS or both. My FPS has been all over the place (flying in same smaller non glass cockpit planes). When the US update came out people were flying all over a much larger area. With the UK everyone is in a much smaller area and lots of people are particularly condensed flying over London.

Might depend on which server they are connected to in game?

Region servers have had load issues in the past. But it seems to be just multiplayer, not related to scenery data streaming. With lots of people testing out the scenery and downloading data, server load must be quite high. I’d reevaluate in the next few days to see how the sim behaves