still having calibration issues .so after looking into it more there is a new version of the A320nx which has an updated Flypad.inside this there is a different calibration page .problem is even though i download the latest development or experimental versions they have the same Flypad installed as the old versions.so no new detent calibration page.i’ve seen a guy who’s a real A320 pilot using the new version and he says just to download the latest version and the Flypad is updated.any ideas??I’m using latest installer and have tried all the different versions on it.very frustrating.
steve

Hi mate.
No this is straight from the FBW website.must have reinstalled it 20 times over the last week.all of the different version from stable to dev to exp.all of them have the older Flypad.A320 pilot says that the newer exp version has an updated Flypad,just can’t find it anywhere.
thanks
steve

Strange as I’m on the Dev version and not experiencing your problem. Only thing I can think of is uninstall it and then double check there’s nothing FBW related been left hanging in your Community folder.

Failing that, head to the FBW Discord and seek advice there.

The version of the FlyPad is irrelevant. If you’re looking at FlyPad throttle calibration videos. It’s most likely they’re actually using the ‘old’ dev version of the flypad (Menu tab on the top).

If you’re downloading from the current FlyByWire installer, whether it is the Dev version or the Exp version. They are already using the ‘new’ version of the flypad (Menu tab on the left side). The calibration page is actually located in the ‘gear icon’ on the bottom left corner of the flypad.

Even my own throttle calibration videos here from a few months ago is kind of outdated now as they moved around the configuration settings in the flypad. You might need to do a bit of exploring within the “gear icon” and find where the throttle calibration is now located. 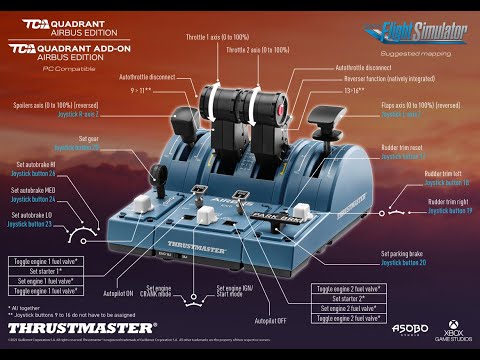 Hi mate
Yes i do know where the calibration section is.i was looking for the flypad that had the from/to detente setting that is shown in your video.in the one i have now their is only one box to click on and i just can’t get that to work.i think it would be quicker to buy a real airbus and just cut off the nose.i have been going round in circles for what seems like weeks.
take care
thanks
steve

thanks i will look.i have found two folder with flybywire stuff in them,and deleted both then reinstalled the latest version.and the throttles still fly up and down at the slightest touch.
cheers
steve

i was looking for the flypad that had the from/to detente setting that is shown in your video.

That From/To is the old way of calibrating through the FlyPad. It doesn’t do this anymore. My video doesn’t even show the From/To entry anymore. That was replaced months ago. The video is showing the current and new way of doing it, which is the single Deadzone entry and a Set from Throttle button.

You need to make sure your Sensitivity Curve are all Linear like so: 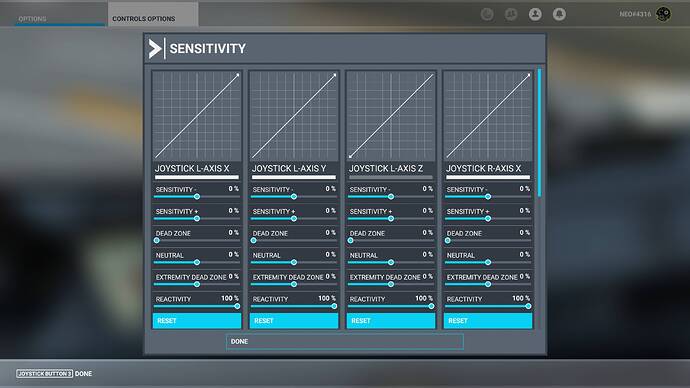 Then when you go to the Flypad. Enter the deadband you want. For me, I like 0.05. Because this will add 0.05 From your current throttle position, and 0.05 to your current throttle position. Pick the position you want to calibrate from the right menu (IDLE, CLB, etc). And you position your physical TCA Quadrant according to the detent you want. For example: Place your physical TCA Quadrant to TOGA position. Then go to the FlyPad, Pick the TO/GA from the right menu. Then make sure the deadband is what you want (for me, it’s 0.05). Then click Set from Throttle. This will make the upper and lower band of the white line to match your current position on the throttle.

Then you can continue the same way on the other detent position: 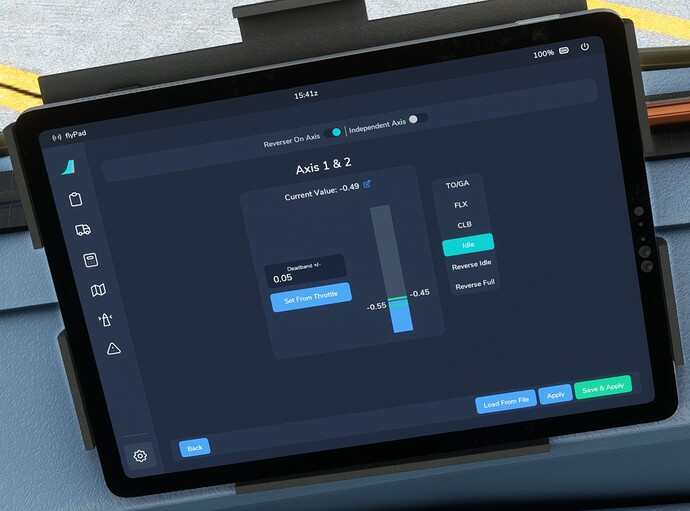 Neo really appreciate your post.i have tried exactly as you say to calibrate the throttles.my problem is that the right throttle won’t move the blue bar out of the reverse idle.i can work down from the top until i get to idle,then it all goes wrong in the bottom three positions i get red warnings that there are conflicts.and it doesn’t matter what i try they won’t go.i have just reinstalled msfs (182GB) and removed the main msfs dir plus the packages/work folder and when i opened msfs to set the controls up my old TQ eng 1+2 setups (i had 4-5) were still there!.i think if i could find where thrustmaster stores the ini files the problem would be solved.
thanks neo i’m not giving up
steve

If you open up the Thrustmaster Control Panel, does you left and right throttle moves properly on the green bar?

You might also need to turn on the “Independent Axis” switch if you need a separate left and right throttle calibration.

Also make sure the MSFS control binding are also the same set between the Engine 1 Axis and Engine 2 Axis. Try to move the throttle in the Control Binding menu, and make sure the white bar also moves the same way for both.

Thanks Neo.
I have been trying all day(my day off) to fix it.i have the Toga,flex and climb working ok.plus full Reverse only.for time being i’m going to settle for that.just wanted to thank you for your help and patience.
thanks
steve

Come to the FlyByWire Discord #support (https://discord.gg/flybywire) if you still have issues. But the guide should solve your issue if you follow it carefully.

The default sensitivity for the Thrustmaster Airbus throttle quadrant was way too sensitive for me. I had to adjust the sensitivity down within MSFS to get more of a linear curve. Working great now although I’d argue they’re still a bit too sensitive, but that’s more related to the short path between IDLE and CLB detents.