Haven’t played MSFS in a while but fired 'er up today and noticed a strange new behavior and wanted to see if this was happening with anyone else:

When inside the plane and wanting to go to drone mode I press the “TOGGLE DRONE” key (which I have assigned to ‘C’). However MSFS now toggles back and forth between cockpit and drone view insanely fast, back and forth back and forth like a strobe. You have to keep pressing it over and over in order to get lucky for the camera to settle on the view you want.

So it seems instead of waiting for you to release they key to initiate the camera change, the sim just starts flipping between views as long as the key is pressed down. Is this happening to anyone else? It’s making it extremely difficult to go to drone view and back.

Here’s a short video showing what I’m talking about: strobe

Make sure C isn’t mapped to something else. And make sure the C key on your keyboard isn’t physically sticking.

I kept mine mapped to the default DELETE key above the four directional arrows on a full size k/b.

so the plot thickens. I tried remapping “TOGGLE DRONE” to:

the ‘INSERT’ key, and this DOES NOT happen now. a single press changes views without strobing effect

Very strange. And I checked what else the ‘C’ key was mapped to as you instructed, however it is not mapped to anything. So it seems some keys trigger the strobing effect and some don’t.

Hmm, obviously to each his own, but the “C” key is not one I would have chosen to toggle the drone as it is mapped to switching control between the drone and the aircraft by default when the drone view is selected. Any specific reason why you did not want to stick with the default assigned “Ins” key? Have you changed the mapping on the Ins key as well?

nope on my system the ‘S’ key toggle plane controls when in drone mode. as you can see in my screenshot the ‘C’ is not mapped to anything (except TOGGLE DRONE).

It seems some keys exhibit the “strobing” feature while some don’t. AKA some keys execute the action a single time when pressed, and some execute the action over and over while it’s pressed. this is causing a lot of headaches. I’m wondering if this is maybe on purpose, like an accessibility setting somewhere? The weird thing is this did not happen last time I fired up the sim a couple months ago.

(as for your question, the ‘C’ key is a lot easier to hit with my left hand than the ‘insert’ key, thus its more efficient to re-map)

I added my “C” key and it works fine just like “Insert”. 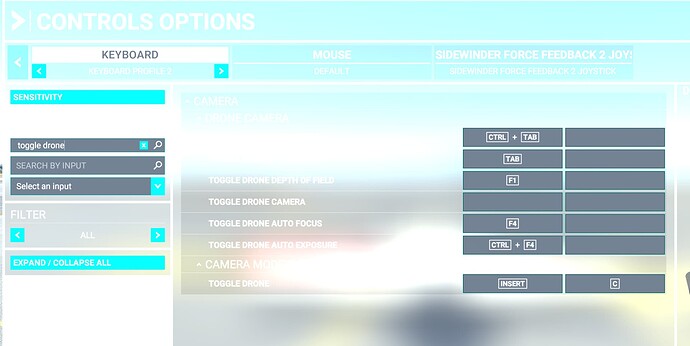 UPDATE: As an experiment I tested out if this strange behavior was happening with the number pad keys. Result:

So of the numpad keys, only key ‘4’ has the crazy strobing action. The other keys were fine. I looked up their key binding and they’re all essentially the same for cockpit view. Very strange! It almost seems like some keys are cursed and others are fine, at random.

Here’s a short video showing what I’m talking about: strobe

Again a personal thing, but I have left the keys to their default actions as far as possible, so I have almost no changes from default. I find it just too easy to lose track of something and cause issues when I make a whole lot of changes. And by following this strategy I find I have no key issues

Hello,
Anything related to issues goes in Community Support. This topic was moved there.