I am a bit reluctant to get one since moving my head sideways but having to keep my eyes fixed feels as a sure-fire, fast-track way of accelerating eye strain.

Can you convince me of otherwise?

I have one. I do not use it much for that exact reason.

I am a bit reluctant to get one since moving my head sideways but having to keep my eyes fixed feels as a sure-fire, fast-track way of accelerating eye strain.

Actually, you will find when you 1st start using the track IR, it is NECK Strain that affects you most, as you try to keep your head locked in fixed position !!!

You could say, that when starting to use a Track IR “It is a PAIN IN THE NECK” !!

Actually, you will find when you 1st start using the track IR, it is NECK Strain that affects you most, as you try to keep your head locked in fixed position !!!

This is where the “pause” feature is nice.

I have a button on my Alpha yolk configured to pause, so I look where I want to look, hit pause then it locks on that position so you can look about / do what you want, then unpause when you are done.

From these comments I can assure you it’s a very different experience with multiple monitors.

You don’t keep your eyes fixed you actually look around and the focus point changes.

You could always try out one of the free alternatives. If your worry is about strain due to movement, it wouldnt much matter if the performance is worse as the principle is the same.

Once you found out wether you like it or not, you could get the real thing.

u could always try out one of the free alternatives. If your worry is about strain due

+1 for trying out the free options before investing in trackir.

I tried opentrack with AItrack, but couldn’t get my cheap webcam to work that well. Thought I’d cracked it at one stage by tuning the camera settings with cam-cfg, but as soon as the lighting in the room changes (which can happen even according to what’s on screen), it’s back to terrible tracking again.

Then tried opentrack with Aruco markers, but the same problem with the webcam giving very poor performance.

Next up was opentrack with SmoothTrack app on my phone. It’s amazing. No need to wear any dongle or QR code or anything to track you. Just load the app on the phone, load opentrack and it all works relaly very well.

I’ve been playing with the phone position and opentrack mapping settings to dial it in to my setup and preference and I’ve got it working pretty decently now.

I’m using a 55" OLED as my main monitor for msfs, so I’ve got a fair ammount of “headroom” (if you’ll pardon the pun) for being able to look around the screen. I have 3 15.6" touch srceen which sit in front of the TV, so I’ve now got a little phone mount which sits behind the middle of these and the phone jsut gently rests against it, putting the camera lens basically in line with my face, maybe slightly lower. Don’t find it impacting my experience having the camera there because the phone is partly hidden behind the other monitor anyway.

I actually now don’t really feel the need to “upgrade” to trackir or similar. I think, why would I want to pay £130+ for trackIR, or even £80+ for another solution…and then have to sit with a dongle on my head, AND have yet another device to think about keeping charged? with smoothtrack, I only need my phone, which I keep charged anyway and it just tracks your face…and does a better job of it than the other options I’ve tried so far too.

There’s a very slight lag between when you move and the camera moving on screen, but honestly, it’s very subtle and you get used to it very quickly.

I’m also actually finding the opposite to what people have been saying about neck pain.

Up until now, I’ve been focusing looking right ahead during flights basically the whole time and jsut glancing down at my touchsrceen for insturments etc…and using the POV on my yoke to look around in the sim.

Now, I’m actually exercising my neck more, and it’s only gentle movements…because I’m using my head to look around and peer out of the windows, etc.

So, if anything, my neck feels better now than it has in years.

Eye strain can be an issue, but I have found this is very dependant on the filter you choose in opentrack.

EWMA actually feels the most natural to me, as it’s a bit more “floaty”. It’s less responsive I think, but feels more like a natural head bobing movement that You’d probably get in a real plane? It’s also the msot blurry though and does give me a little eyestrain atfer a while.

Accella is the one that most people use I think, and it’s “cleaner”, but also more choppy I think. There’s less wobble, and no blur…but it also feels more like you’re looking around in “stages”, it’s less smooth in that respect…whereas EWMA is smoother and more flowing, but more strain.

So i’m still toying with both, but very impressed in either case.

Being able to look around the cockpit, turn your ehad to look for the runway etc…it’s a game changer.

Maybe the trackir software would give even better reesults, but personally, i don’t fance spending £130+ and having to wear prongs on my head to find out haha

I should point out…SmoothTrack isn’t free…It’s about 8 quid on playstore…but it’s the best 8 quid I’ve spent in ages.

I recently picked up TrackIR and it really makes a difference. I was wondering how the looking but actually not looking thing would work, and for me it’s not been that big of an issue. It is a little weird at first, only having one monitor, but I’ve not had any neck or eyestrain issues. The only thing I’ll probably look into is what someone mentioned above about having a “pause” button, since every time I look to a different screen or notepad to write things down, the camera goes nuts till I look forward again.

But overall I REALLY like it and it’s really made a difference in my experience, especially for things like pattern practice, and overhead panels. Pricey for sure, but in my case well worth it.

Never had any strain issues with TrackIr. Get the Pro version. Excellent contribution to the flight sim kit.

When using trackir you really have to experiment with the profiles. Once you have dialed in the tight curves it just feels natural.

Could not fly without or rather if mine broke I would have to wait not use the sim, untill I could get another.

Kinda, sorta like people and VR, once you gave tried it and like it there are no going back.

The wider/larger the monitor the better.

No problems at all here. It‘s been so natural for more than 10 years that I don‘t even think about it. I can‘t fly with a hat button anymore.

As implied by Salem978, TrackIR is only a head-tracking device; it does not track eye movement. Tobil, on the other hand, can be set to either eye or head tracking. I own the TrackIR and not Tobil. --Redeye

Been using TrackIR for close to a decade, never even occurred to me. Like ever.

First of all, the pause button eliminates trying to hold your head still. Secondly, neck strain? How? Did you guys not bother setting it up? Just plug and use it with stock settings? Go on YouTube and find a video on setting it up. If anything I move my head (and thereby my neck) way less with TrackIR as opposed to more.

agreed, might want to recalibrate, there are several videos of people using TrackIR and they barely move their head and can get the camera in-game to almost turn 90 degrees left and right. Can’t wait to try it out myself.

Using trackir stock out of the box plug and play never had to do any setting tweaking. Within half an hour I got used to it.
Never had a single little pain or strain using trackir.
A flightsim should be sold included with a trackir set in my opinion.

Tobil, on the other hand, can be set to either eye or head tracking.

doesn‘t eyetracking only mean that the device follows your eyes when you move your head? That‘s basically what a track clip, hat or any other device does too. Except that you don‘t need any mountings.

I tried Tobii and returned it immediately. It was flickering and it has to be mounted below the screen within a distance that was too small for my setup… it just didn‘t work but disturbed me ^^

doesn‘t eyetracking only mean that the device follows your eyes when you move your head?

No, you can keep your head still and only move your eyes and it will follow.

There’s a full review here which goes over that as well. 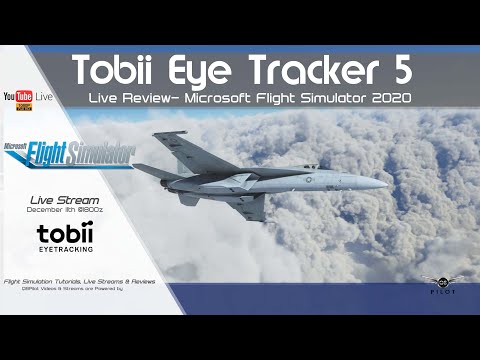 And what‘s the point if I look to the side of my screen? I can only see where my focus is so I waste my whole screen…