Hey guys. I know most likely a lot of you like me tried a thousand times to unlock the my way achievement even using tips found on the internet and where unsuccessful. I recently unlock it my self using the tips found on the internet. Turning all assistance of and all that. Now the key element that I found that pretty much nobody mentions is that you cant alter the time. Weather and Time must be live in order to unlock it. If you did everything about assistance and still haven’t been able to unlock it, this is the the key you where missing. I hope it helps out on your journey.

This achievement was bugged for the longest time, but I can confirm it does work now. Here’s a rundown of how to do it.

Create an IFR flight plan, not VFR. All assistance settings have to be true-to-life, with live time and weather.

Choose a parking ramp for both departure and arrival, at least 300 miles apart. For my flight I went from Cambridge (EGSC) to Donegal (EIDL).

As far as I know, you can use any aircraft. Just make sure it’s one you’re familiar with, since you’ll be starting with a cold and dark cockpit.

Leave both the checklist and ATC windows open throughout the flight. You can minimize them, but do not close them. Also, do not open the VFR map. You can use autopilot during the flight, but not the AI pilot assist.

You have to maintain contact with ATC throughout the whole flight. Obtain IFR, taxi, and takeoff clearance. Acknowledge and follow instructions for climbing and descending, approach, and landing.

Once you land, wait until ATC tells you to clear the runway before exiting onto the taxiway. Request taxi to parking and follow the route to your parking ramp. You’ll see the marshall there to guide you into the spot where you can shut down your engine(s).

I did mention that you need live time and weather.

Its true my apologies. I quit didn’t understood the need to hijack my post but yo did mentioned it.

I wrote this whole night hope may help:

Ok, I’m not the first one to open this kind of post, but I may guide you to achieve this headache achievement. I’d flight around 2 weeks and earn 100hrs in the sky to fail this achievement, and search the whole google and youtube to find a solution, unfortunately, all these threads were too old and not accurate information, so I made a CLEAR CHECKLIST below, hope may help all of you to unlock this. Never completely close the Checklist AND ATC tab. Minimization is fine. Never use the AI pi…

I already achieved it. Thanks.

Ok, I’m not the first one to open this kind of post, but I may guide you to achieve this headache achievement.
I’d flight around 2 weeks and earn 100hrs in the sky to fail this achievement, and search the whole google and youtube to find a solution, unfortunately, all these threads were too old and not accurate information, so I made a CLEAR CHECKLIST below, hope may help all of you to unlock this.

step a - I set a ramp nearest to any desired runways 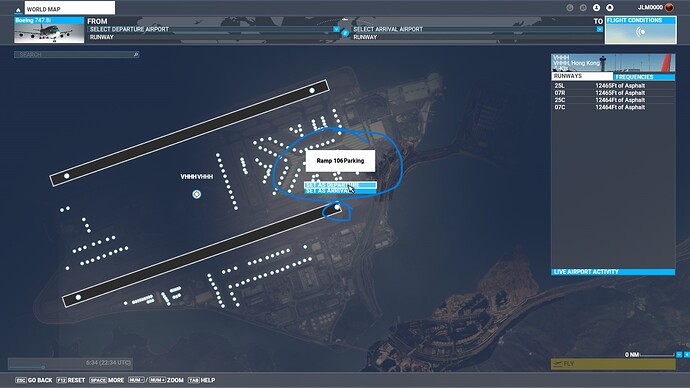 step b - I set the arrival gateway not RAMP to proof RUNWAY or GATEWAY all WORKS to unlock, the position of destination I also choose the nearest and the easiest taxi gateway, but AI-ATC will change this gateway depends on LIVE TRAFFIC, so please well prepare any INSTRUMENT LANDING CHARTS for arrival airports and I assume you know how to read inside the airport’s route and gateways/ramps parking carefully 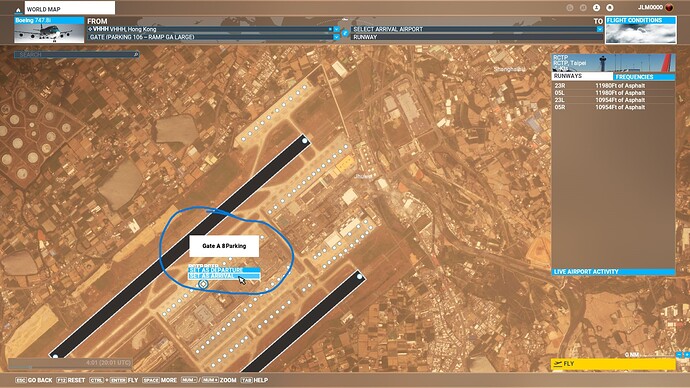 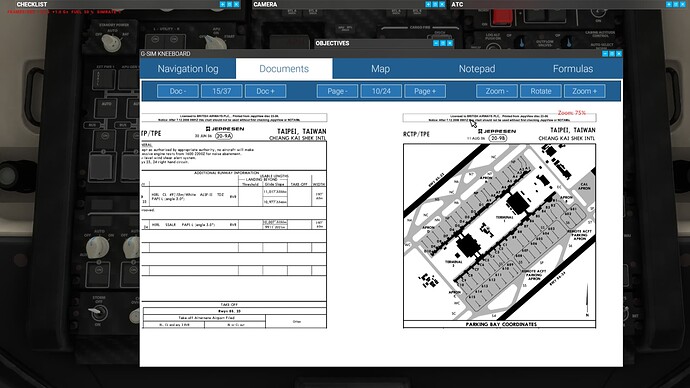 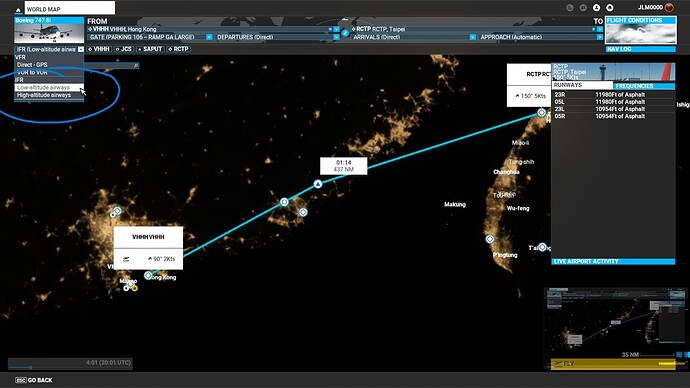 step d - back to the departure ramp and set departure procedure to the nearest runway for easy taxing to takeoff runway, NOT NECESSARY as same as the MSFS’S gave’s you 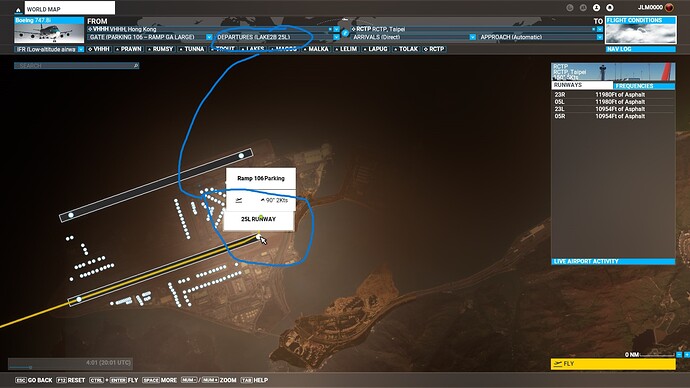 step e - Zoom to the arrival gateway location, read the runway that MSFS gave you, and set the ARRIVAL procedure’s runway as the same as MSFS’s. Leave APPROACH to direct and set up MCDU later 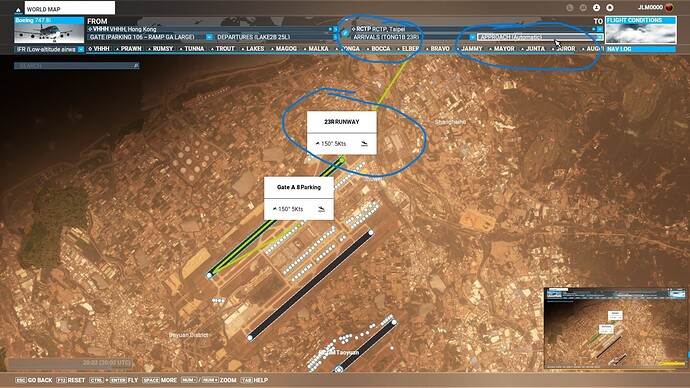 Remember to set enough fuel before you start the flight 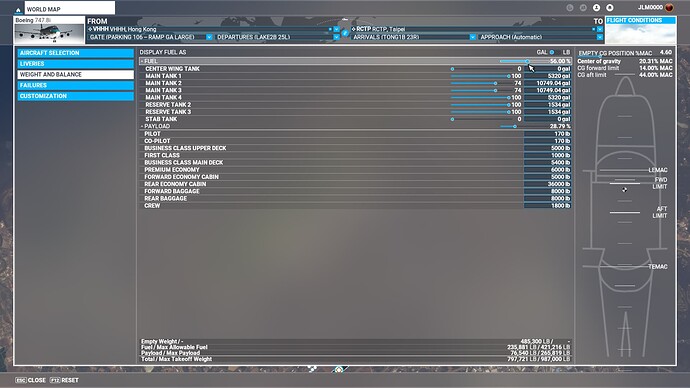 You may share my post anywhere on the internet or on youtube, but please gimmie back my copyright, I’m a player from FAR Hong Kong, and apologize for my grammar.

Continuing JLM0000’s very detailed walkthrough of the My Way achievement above. There are few things unclear when reading through it that left me wondering. I got the achievement yesterday, so just wanted to clear that up. Read JLM’s post first and then perhaps this.

Points 1-3, 6, 7 and 10 from JLM’s post: I do not know if anyone has confirmed that these tricks are essential. Everyone says so, so you’d better do as mentioned.
I can confirm it is OK to not respond to ATC in the first instance and getting the “Did you get my last transmission” nag. But getting that, you’d better stomp on that “Confirm” button!

For departure, I recommend entering the altitude given by ATC, setting the heading mode to TCK (not HDG) and preparing auto-throttle. This way, you can engage the autopilot as soon as you are off the ground and have the gear up, thus reducing the risk of overspeed or stall.

I agree with JLM that the approach and taxiing are the tough parts. When finding the best route, find a departure airport with only one runway, so you won’t get lost taxiing. Your destination airport should have a single runway and ILS in both ends. (I have not managed to find a perfect pair, so I had to land by visual, which is unnecessarily more difficult).

I’d recommend setting up the flight starting only just before the beginning of the approach and flying that with a lot of assistance, since the last part is where you will fail. Especially, since the taxiways and gates are rarely indicated properly, you’ll probably have to taxi with assistance first and then without just after. That is imo the only way to do it.

Another reason to practice the approach is that the AI ATC in combination with the flight plan and MCDU is pure chaos. You may get cleared for a visual approach, so you have to learn requesting an ILS and entering it into the MCDU. (The latter is not as bad as I thought: F-PLAN, press button next to arrival airport, ARRIVAL, chosen ILS and then Insert in bottom left corner.) For some approaches, that will send you on a spiderweb of waypoints - other times nicely onto the runway and that is why I recommend trying it out before your big run.

A tiny but also very important note is JLM’s point of the Objectives. For example, even if the guy with the wands at the arrival gate told me to shut down the engines, the Objective of taxiing to gate had not completed. So I moved one meter forward and it completed. That is SO important.

My achievement popped as soon as I had completed parking and before shutting down the engines.

I hope it helps!

I question some of the points in JLMs post.

Points 1 and 3 are correct. Don’t open or close any window that changes the options from “True to Life” to “Custom”.
The whole flight has to stay in “True to Life”. Point 2, avoid using the co-pilot, wasn’t essential for me.

Point 4 the Route. It has to be 300 miles, 261 NM. The achievement requirements mention parking to parking so I’d start in parking.

I used a VFR flight plan and didn’t use ATC for the flight as ATC was largely snafu when I made the achievment (Feb 2021).

My route was EGLC (London City) to EIDW (Dublin) via the Valley VOR in North Wales because a direct route wasn’t far enough. I flew East to West to avoid turning around after take-off and before landing. Default runways are mostly East to West. I used the TBM 930 as it’s easy to hand fly and fast enough for 300 miles, just over an hour.

I started at the gates, taxied to the far end of the runway and turned around*, got take-off clearance for straight out and took off. I set the autopilot to follow GPS to Valley at 11000 ft. ATC told me I was leaving their airspace and I chose ATC flight following so I was able to go and make coffee mid-flight.

At Valley the AP turned to Dublin and chose EIDW Dublin when it was the first choice of Nearest Airport, requested a full stop landing, turned off AP when I saw the runway, reduced speed and hand flew down to runway 28. I stopped the plane on the runway until told to clear it then taxied off and contacted Ground. After getting Ground clearance I passed control to the co-pilot who completed the flight/achievement.

Point 5 is correct, any of the stock planes is fine.

Point 6 is dubious. I’ve never used Multiplayer or Live traffic. I also have real time and Live weather turned off by default. I live in rural Ireland where connection is lost more often than my temper.

Point 7, cold and dark start, I followed as that’s my default.

Point 8, Objectives, is dubious. I don’t think I’ve ever looked at them outside a bush trip.

Point 9, ATC, is dubious. If you’re using ATC for IFR flight then it seems correct that you have to follow but I don’t use IFR much at all for non-jets and definitely wouldn’t use it for this achievement. VFR and flight following was fine for me.

Point 10, sim rate. Yes, this should be left untouched. I have also found using the sim rate doesn’t change the length of time a flight records in the log book either. 1 hour of flight time at standard rate is one hour. 1 hour at 4x sim rate is still 1 hour in the log book.

*Taxiing to the runway. FS2020 doesn’t know how or where you taxied. If you start in a parking spot and taxi all over the place it’ll be fine if you end up near or on the right runway and at the right end of it when you request take-off clearance.