Not a gaming developer so it’s an uninformed question. Is what I see and read about Unreal Engine 5, will or could that tech make its way into flight sims? 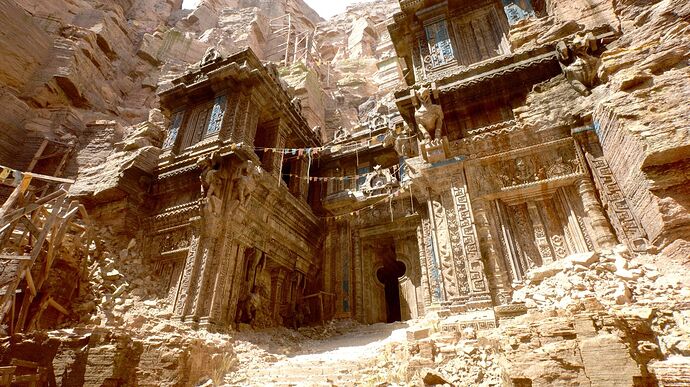 I am no expert either, but I highly doubt it. While it is impressive that their engine can pull this off, I feel this level of detail is still many years away from making it into a flight sim. Keep in mind we are rendering the entire world as opposed to a tiny level as shown here. It would be awesome but still far fetched.

You can find awesome tech demo of UE3 and UE4 too.
Develop a game is a completely different thing and FS need to use an engine that can manage well open worlds (like FH)

Lumen, and Nanite (the two main flagship features of UE5) are not very applicable to flight sims. Of the two, Nanite would be more applicable as it deals with mesh geometry and level of detail for scenes. But for the purposes a flight sim has, this can be accomplished just as well with the hardware acellerated tessellation that we have had since DX11 and the equivelant OpenGL version.

Assetto Corsa Competitzione is built on UE4 tech with its own integrated physics for car racing simulation, even though the VR side of it is poor the rest of it proves that you can have a highly simulated codebase with UE graphics capabilities.

So yes, I can see a flight sim being used by UE5.

Nanite could be great for photogrammetery or high quality height data since it will handle much higher detail.

Also i see no reason why lumen couldn’t be used for gi in flightsims. Atleast it’s more usable then raytracing in large scale environments.

But this engine is still in very early state and lot’s of features are not yet supported. So we just have to wait and see. At this moment i still prefer using 4.27. Quality of lumen is no way near a baked scene combined with raytracing reflections/translucency. Though this is only for interior spaces.

Like someone else said, assetto corsa competizione is a great example on how unreal engine can provide a great solution for a wider variety of games then you might think.

But i don’t see msfs swtich engines soon since it’ll take a complete rebuild of the flight sim. There’s a reason they choose to take so much from fsx… And with msfs on the market i doubt there’s any game studio even considering making a completely new flight sim.

If you want an idea of how a “Flight sim,” looks in Unreal Engine, Ace Combat 7 is a prime example. But that’s as far as I’m going into that.

The main thing that has been holding back flight sims from being made in Unreal was the extremely limited 32 bit coordinate system. I’ve done some flying game work with it, and it’s a total nightmare, especially when considering multiplayer. You have to do all sorts of really nasty world origin shifting and math hackery to get anything usable out of it, and that stuff is very much a house of cards. Without trickery Unreal 4 can maintain centimeter precision only out to a distance of 2km from the world origin before things start to fall apart badly, leading to ever increasing position jitter.

Unreal 5 is the first mainstream accessible game engine to finally feature a proper 64 bit coordinate system. The Arma engine has had it for many years, but it has never been performant and that engine is limiting in other ways. Unigine does it as well, but only as an extremely expensive optional feature. This feature hasn’t had the fanfare of Lumen and Nanite, since it isn’t a flashy visual thing, but in the end it might be more important than either.

If I remember the math correctly unreal 5’s 64 bit coordinate system should be able to maintain centimeter precision out to roughly the orbit of Neptune, or something similarly ridiculous, and without any origin shifting nonsense, so indie multiplayer flight and space sims may finally become a real thing in it over the next few years. At even higher precision planet scale would still be easily doable. They ditched world composition as well (another nightmare) for something much more robust and clean.

I don’t see anything as grand as MSFS being made in it anytime soon, there’s a lot more to a flight sim than nice terrain and lighting, but it should be interesting seeing what comes from it eventually.

Not a gaming developer so it’s an uninformed question. Is what I see and read about Unreal Engine 5, will or could that tech make its way into flight sims?

Just to give you some perspective on a similar building, with this level of image quality the MSFS world is already 2 PB large. 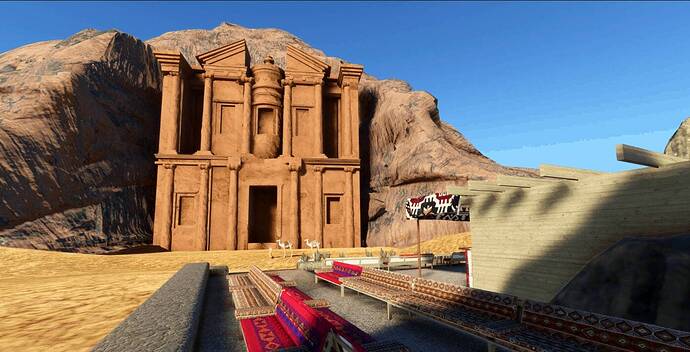 The key issue here is that a videogame is restricted to a very limited number of locations looked at from ground level, a flight simulator has to represent the entire world at any altitude. A bit more ambitious.

Unigine and all pretty modern engines too, yeah. No. It makes not a thing better to help in simulator development with needs of weather systems, planetscale right lighting, scene organization, plane systems development pipeline, etc. Also, because of UE dev ideology is highly around using advanced visual tools for content creation by hands, not for a procedural pipes of data, and if you will need to write it own for yourself and do not use 95% of engine tools, culling all that as a dead weight - why to use it? - easier to replicate wished tech in an already used engine then.

No need to change the core rendering engine. We already have photogrammetry that often looks just like the photo in your post!

If I had to guess… Unreal Engine 5 is an engine that allows developer to make game maps, levels, and objects. Basically the world within the constraints of the game they’re building. It’s impressive, for sure. But when it comes to Flight sim. You have to create an entire world. And with the level of detail that the demo is showing, it’s an impossible task. Because someone would be in charge of creating and certain space based on real world conditions, and drawing them in the engine, and placing them on the world map. Then move on to another block of space, do the same thing, over and over until the entire world is rendered. That could take 100 years to do. Hahaha.

The only thing I can think of is to use AI to automatically generate the world with the Unreal Engine 5. So people don’t need to draw the assets themselves, but let the AI use real world data and photography to draw the assets to the engines. But as we all know, AI is limited to the quality of data being fed to it. If there’s a lack of data or very low quality. The AI can’t really do anything, and depending on how it’s built, either you have a missing patches of area that just doesn’t exist. Or if you let the AI do it themselves, would be an vibrant and vivid graphics that is totally inaccurate from what the real world situation would be. Either way, requires someone to actually draw and do quality checks on the missing objects anyway, which can take another 100 years to do.

So while I think the technology is great, I can’t see a way for it to be feasibly applied to flightsim development.

Does/would something like Unreal Engine 5 or an equivalent have anything to do with movement like for trees? It struck me as I was sitting on the tarmac with the wind blowing pretty hard that all objects (trees for example) remain unaffected, no movement.

It´s easy to make a small scenery look nice. MSFS is about the entire world, and, right now, it´s impossible to have that level of detail. You have to scan the whole world or your artists have to model every inch. For now, we are more than ok with satellite imagery, AI, some scan, and some handmade models.

all race and fps engines work with very short range rendering, i just don’t think in close future we’ll got universal engine for flight simulators and other games, flight simulator’s engine have quality limitation, other - range limitation, and that’s thing will stay with us very very long time, even when we got graphic like have this days fps game in simulator, that days will have much better graphic for fps, and as i said before, time when same engine will work with all type of games is far future… and i pretty sure about this

And the data must be available. I´ve downloaded sceneries for the Alps, NZ, some small islands, and they look great (of course, not as good as a small scenery in UE5). However, I live in Argentina, and that kind of data is almost impossible to find for Latin America. It would be amazing to have the Andes with better detail…

time, and everything become

Tried to create a scene by using quixel assets which had a quality as high as seen in this screenshot months ago. Size was more than what MSFS installation takes

Of course i am neither developer nor designer so 100% sure it can be smaller. Even tho you can reduce the size, i don’t think Unreal Engine 5 Quality Simulator is possible yet

(for end user and affordable)

I don’t see it happening soon. Did some math the other day: at average cruising altitude MSFS is rendering surface area roughly 1500 times the size of the entire map of GTA 5…

The UE5 engine is mainly optimized for typical video games which operates on a very miniscule geographical scale compared to FS.