I am curious if anyone has any experience upgrading to a 13900k from a 12700k?
I currently have a 12700k with a RTX 3080 FTW3 and am Mainthread Limited running on mostly Ultra settings.

I see all the benchmarks online recommending the 5800X3D, but i am hoping to not need to get a new mobo on top of cpu.

Anyway, curious to see if anyone else has real experience on this upgrade to see if it will be worth the upgrade.

I also have my FPS capped at 40 for PC and 30 for VR…just want to get the best experience with the best visuals along with Live weather and FSLTL running.

Get a 4000 series card instead. You have more than enough CPU. This game needs GPU.

The short answer is that I haven’t and do not really know what level of improvement you may achieve. That said it sounds like the 13900k is a good CPU.

Curious how that would be a solution when in VR or PC I am ALWAYS Mainthread Limited?
A Bigger/Better GPU will not help…will it?

Just trying to see if anyone else made the jump and what their experience is/was.
(I know its quite a bit of money to spend for a new CPU when i can just adjust a few things down and call it a day)

I can tell you my experience with a 9900k to a 12900ks upgrade some months ago, keeping my 3080Ti card on a completely new PC including also M2 disks and DDR5 RAM. The performance was nearly identical even if the CPU, MoBo and HDD + RAM were faster. I maybe gained 5 fps average. However the game loading times and camera panning were improved massively.

On my setup I get a lot stuttering with TLOD pass 150 depending on where I fly. Places like KATL I have to keep it around 100-120 to get a playable experience. Adding in AI traffic adds more burden to my CPU.
Nearly all of my settings are set to Ultra except the LOD settings.
My Specs are on my profile. The highest VRAM usage I have seen so far is 15.2gb.

I don’t think so. MSFS2020 has always been CPU-intensive in most cases. I have the same setup as the OP and in 1440P ULTRA, I am CPU-bound. FS2020 needs more CPU muscle than GPU especially if you fly planes like the Fenix A320.

I usually fly VFR with GA (no problem with FPS here, >= high 40s - 60s) but recently spending most flights with the Fenix A320 getting between 25 to 30 in large busy airports with traffic, and between 30-40’s up high.

CR33, you and i have the Exact same setup.
I have my “All core” at 5.1 GHz as well with Single core up to 5.3 GHz.
For the most part…FPS are fine all the time with me setting 33% VSync which nets me 40 FPS.
I have just notice with busy airports and FSLTL i get down to 30 FPS and below.

Hopefully we will hear from someone that has upgraded to the 13900k and can give real world experience.

I don’t think so. MSFS2020 has always been CPU-intensive in most cases. I have the same setup as the OP and in 1440P ULTRA, I am CPU-bound

Resources monitoring show a GPU usage above 95% permanently with a high VRAM load as well, while only an average 10-20% CPU usage exists. CPU has some higher peaks, but they last less than 1 second. Definitely not a maintained high CPU load. That´s for TLOD 200 and 3840x1600 in my case and with DX12. In my old setup (same 3080Ti but with a 9900k instead of 12900ks) I got a bit higher CPU usage, but still on a similar low range.

I am still holding my guns for that 13900K until there is a convincing review/experience that the performance benefit of the upgrade is worth the $$$, at least for our hobby. Though my 12700k at 5.1GHz is still the bottleneck with FS2020, the experience is still generally very good. This is just a “kiasu” (Singapore slang) case of me LOL.

No game will utilize 100% of a multicore CPU. MSFS is a very light-threaded application, so it leans heavily on only a few threads to do 90% of the work. In this aspect, the 13900K is a significant improvement over the prior 12th gen due to its high single-core boosting performance at 5.8 Ghz. I routinely see my 13900K boosting multiple threads to 6 Ghz.

I’m not sure what you’re holding out for, as there are multiple reviews and user experiences on this forum. If you want to see a benchmark, here’s one: a near 30% improvement over the 12700k. 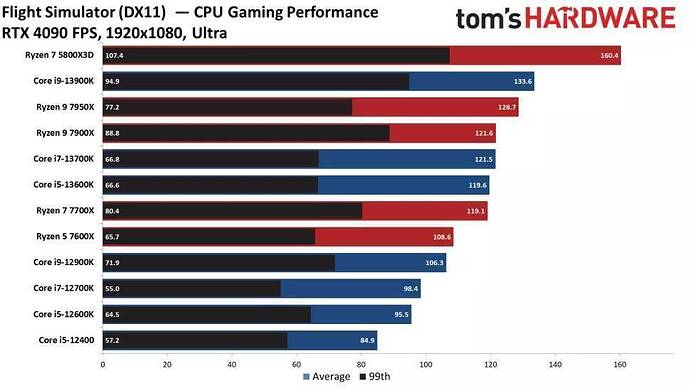 Ah!
Got it, makes sense.
Thank You

thanks for the insight mate. i am also looking at some recent reviews right now and it does show some promising performance improvement.

So I plugged the new chip this morning after upgrading the mobo BIOS and boy am I impressed!

At full ULTRA in 1440p (TLOD 200) with FSLTL Traffic and weather, I get a consistent 18-22 fps gains over the previous chip in FS2020 with view panning now becoming much smoother, though the first time you pan in a direction will cause some micro stutters. That’s about 60-70fps for the c172 over lower Manhattan, 52-56fps active cockpit view in the Fenix A320 in my local Airport with traffic and weather, 60-65fps external view in same airport. This are just my preliminary results without doing much tweaks. If there are further improvements I will update this thread.

Strangely, DLSS still does not make any difference in fps, in fact in some areas I lost about 2-3 frames. Moving to DX12 also dropped some 2-4 fps so it’s still DX11 for me.

Do I think I still need a 4090? At this point and this performance, No. Unless Santa comes in early this year

This is Awesome to hear!

I will still be capping my FPS at 33% aka 40 FPS, but to know i will have smooth performance and be able to maintain my FPS for viewing quailty is a huge plus!

I will be sticing with DX11 as well, but will be comparing TAA vs DLAA (Not interested in DLSS as i want the best Visuals and am not shooting for high FPS anyway.

Really appreciate you taking the time to post all of this and do the testing…looking forward to the upgrade myself.
(I know i could wait for the 7900x3D, but i rather not have to change the Mobo…so sticking with the 13900k works for me)