Upgrading CPU or other

So my present rig setup is:

At the moment am using VR with either airlink or VD as with Cable I get tearing.

Was thinking of upgrading either to:

I would wait for the Intel 12th gen Alder Lake that will be released in a couple of months.

Ryzen 5800X.
You have to change the MB anyway, so it’s worth going for the best one for a little more money.

Was thinking of upgrading

Before throwing spec options around, what are you wanting to achieve with your upgrade over how your system performs now?

stability. At the moment its just a hit and miss to fly in VR. I mean most of the time is great except stuttering on modded airports. My in-game settings are on medium/high but still think there is some place for an upgrade somewhere.

The best way to see what is holding you back with performance is to set up FS in VR for a flight you normally do at one of your modded airports, turn on Developer Mode and turn on the FPS counter on the menu it gives you. The FPS counter will show what is limiting your performance and by how much. My experience of using this assessment method with high res VR shows that it is my GPU limiting performance by a factor of at least 1.5x, so upgrading my GPU would be most beneficial to my FS VR experience.

Also, Windows Task Manager can show what percentage loading of your CPU cores and GPU are in this scenario. If you could post a screenie of what these two items are displaying, that would be helpful.

Here’s what my FPS counter and Task Manager performance windows look like at my local airport, which is in a small city in Australia. As you can see, my GPU frame time is 50% higher than the next closest thread (RdrThread) and the performance window shows my GPU pegged at 100% and my highest used CPU core has 30% spare capacity, so it is quite obvious my GPU is the component that is holding me back. Yes, I have a 3080, which is no slouch, but even that gets stopped in its tracks with high res / high graphics settings in FS VR. 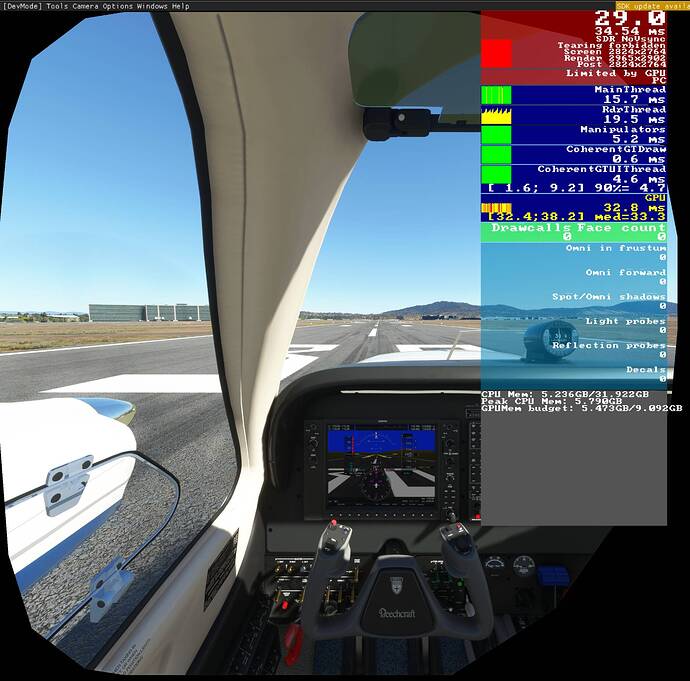 Re stuttering, that’s a tough one as significant stuttering has all but disappeared for many of us since SU5 came out. As you say it occurs mostly with modded airports, that rules out internet connection and likely GPU and suggests your CPU, SSD or RAM are the bottleneck. I would suggest trying a RAMDisk and putting your FS rolling cache there, but that only caches downloaded data as far as I am aware so not much use for locally stored scenery. 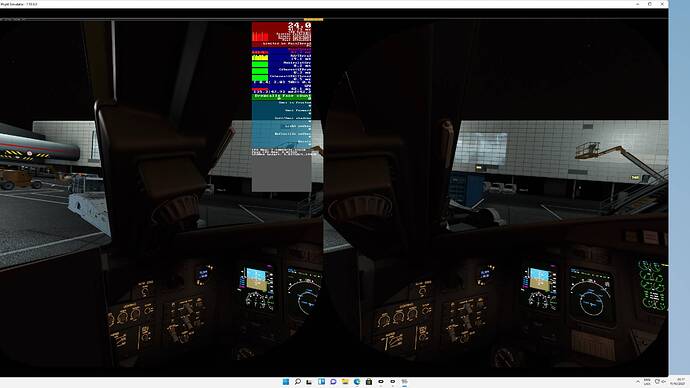 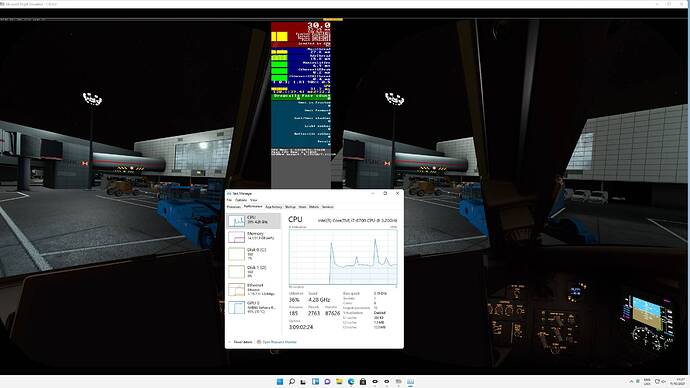 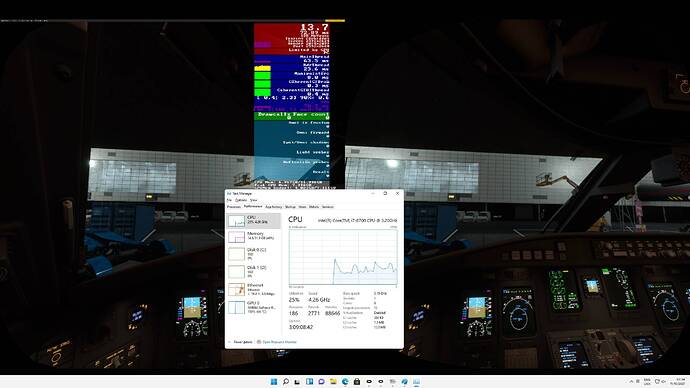 If CPU is needed I can upgrade today to an AMD 5800X and a Gigabyte X570 Aorus Elite Mainboard but I cannot afford to dish out 800euros and remain the same. Was thinking as well to change to Reverb G2 instead of upgrading the pc maybe I get better results

I’m not sure if this would help your specific situation, but I followed this method, and it has helped me to restore my missing FPS due to limited by mainthread and underutilised CPU.

If your performance limiter is switching between GPU and CPU (MainThread), then your system is already nicely balanced for these components.

If you upgrade either one of them, the one you didn’t upgrade will become the limiter. eg. on that first screenie, you will probably pull about the same FPS after upgrading either component and on the second one maybe 1-2 FPS if you upgraded the GPU, which shows the slowest frametime in that scene. As such, a CPU/mobo upgrade is not really going to do much for you, unless you also upgrade your video card to something like a 3080 and then things are getting really expensive!

For that third screenie, I wouldn’t use it to make upgrade decisions as WMR can get quite screwy popping out and back in to VR.

The Reverb G2 may give you better visuals, but in order to fully appreciate its extra resolution over the Quest 2 you’ll likely want to run at a higher render scale which will push your 3060, an otherwise very capable video card, beyond its capability so, again, you may only end up marginally better off.

Sorry to rain on your potential upgrade plans but, to me at least, your system seems quite nicely balanced across CPU, GPU and VR headset and it would take an upgrade of most, if not all, of those components to see a major jump in performance and visual quality in VR.

Did the new drive reduce your stutters?