I’ve been really enjoying Msfs in Vr using my oculus CV1, however the lack of clarity through the lenses is an immersion killer and I’m looking to upgrade.

I’m interested in the quest 2 but I’m I’m two minds about weather it’s worth the upgrade, I’d be interested to hear your thoughts?

Does the quest 2 work well with the link cable in msfs?

Would I see a considerable difference in image quality?

I have a rtx 3080 and ryzen 5800x, so im hoping my pc specs are good enough. In the CV1 I can mostly max out everything and have a smooth enough experience…however it would be so much better to be able to see the dials and text in cockpit without zooming in.

I was in the same position as you. Had CV1 since the headset release, running with a 3080.

Image quality on the Q2 is WAY better (think 2x resolution/clarity) you will not be disappointed, especially with how cheap the Q2 is.

One thing I will say is that you really do need the elite strap. The elastic Q2 strap is really only bearable for 1 hour at a time. Even the elite strap is not as comfortable as the CV1 strap, but it’s not too bad after upgrading.

I have a CV1, but it is on a box since I got the Q2. First experiences with MSFS and Q2 were very frustrating to me. Lots of tweaking, testing nvidia drivers, etc, etc. They just update the PC app to V25 and since it was update it is running really well. I am using almost full resolution with amazing clarity, 30 Hz ASW and the FOV multiplier to save some fps. There’s no screen door effect and overall image quality is also much better than CV1… for example CV1 on night flights was terrible. Q2 is great.

https://www.youtube.com/user/force3d/videos He did some videos comparing Rift S to a recently purchased Q2. Rift S still seems pretty good… Upgrading from CV1, I believe it will be a decent improvement.

Yep i agree with both statements above. I have both and am using the quest 2 soley now. Clarity is improved, make sure you have the updated tool tray to compliment it also. Can’t remember the version number.

Thanks for the response guys,

I currently tweak ASW through Oculus tray tool to 30hz in the rift Cv1.

Am I correct in saying you can do the same with the quest 2?

Hi Yes you can I was a Oculus Quest 2 Pre-Order and came from the Rift CV1. To be honest its a bunch of pluses and minuses. I am having to RMA my Oculus Quest so have gone back to my Rift, this is after many months of only using the Quest.

Things that hit me where…

Your lucky the controllers are very similar. Ive used the CV1 for around 3 years so very very used to it, and the change to OQ2 controls was very natural.

I do believe that the OQ2 is the best all round system available today but that some of the differences between CV1 and OQ2 do niggle, comfort is one, sound another (CV1 is excellent, OQ2 imho is barely minimum viable), colours are washed out on OQ2.

But the biggie is its standalone and wired and works great in both scenarios. For me I can appreciate the resolution difference and I can see it but its not the wow factor you might think looing at the charts. 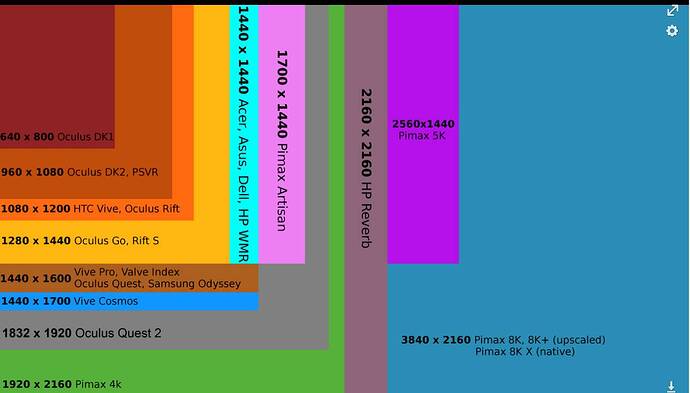 You would thinks its night and day when while it is better its by no means the difference you wold expect looking at it on paper.

Cost… OK so the headline is £299 and you can absolutely do it for £299 but no PC! So to get PC you either go wireless or wired. Wired is £80 for Oculus or around £25 for 3rd party. I dont know what the difference is. Then there is the sound and the strap. You can live with the strap but for me the sound had to be changed this meant headphones, I did not want another thing to plug in so I went for the Vive Delux Audio Pro headset. This is very similar to the CV1 strap in that it is sprung loaded, so once adjusted you just pull away from your face to get it off - not the same as the Oculus straps! Lastly many people find the foam faceplate irritates their face, this ranges from annoying to actually causing the face to react and go red and blotchy - there is an official Oculus announcement on this (Customer Support Update for Quest 2 Foam Interface | Oculus). For me it was just annoying, it definitely got better with use but I eventually change to a PVC cover which is much better but in my opinion still way worse than the CV1. One of the problems is the weight of the OQ2 you need to press it on your face as opposed to the CV1 which just rest there.

The problem now comes that you’ve spent £299 on the headset, £80 on the cable, £20 on a faceplate and £100 on the strap and headphones so your headed towards G2 money. That said G2 can’t do standalone and has issues with other games, tracking and controllers are not what they should be and probably will be patched but I doubt based on the G1 that they will be anywhere near as good as Oculus. The best summary I have seen is if you only sim race and fly using joysticks, wheels and pedals then the G2 is a no brainer the best of anything available. However If you want to “do” VR then its the OQ2 as you have standalone and PC and great tracking and game support all in one package.

All my opinion so take with a pinch of salt

Thanks for taking the to write such an informative post, it’s appreciated.

I used a CV1 Rift for 3 years and now use a Quest 2, and I agree 100% with everything you said. This is an excellent and thorough summary.

I will just add, regarding the contrast and color saturation differences: if you’ve never used a VR device before and buy a Quest 2, the colors and contrast will look just fine to you, because they are still pretty good. But if you’ve seen what good OLED screens can look like, with their total-darkness black levels and wide color gamut, you will definitely notice the step backwards in the Quest 2. Also, the audio on the Quest 2 is actually surprisingly good considering it doesn’t have actual earphones, and does a good job creating spatial 3D audio around your head, but it still can’t compete with a good set of headphones.

I’ve decided to purchase the quest 2. I will let you know how I get on. I’m excited to try it out!

One other I notice in the CV1 is the distortion on runway/taxi lights, it makes it incredibly hard to see when all the lights are distorted so badly due to the low resolution. Im hoping I see an improvement with this in dawn/dusk flights.