Also, the consequences of using this flight simulator for flight training could be disastrous for this community if the NTSB said Microsoft Flight Simulator was the main contributing factor into the crash of an aircraft. Probably, It would put Microsoft in a difficulty position of whether they can develop flight simulator? They might have to stop completely stop development , turn off the servers and remove it from sale. That would be the end of flight simulator forever.

Its not certified, never has been and is unlikely to be. Nobody who knows anything about real aviation would use (or should use it). I’m not sure what your point is.

i agree this is a bad idea anyway, likely you will learn more bad habits than anything without supervision
since this Game is not certified no CFI would suggest using it to start with

there is no way the game is going to be liable, its just a game and if you use it outside those conditions it will be on You not the game
the NTSB is not silly enough to try and blame a game for someones mistaken ideology that learning from a game will apply to the real world

I guess the main question might be: Can a student pilot play MSFS during training, or is it better to set the sim aside for a while so that it doesn’t interfere with real world training?
I know some student pilots who have decided to stop playing the sim for fear it would give them bad habits. I know others who have found a way to use the sim productively during their training.

if i where spending that kind of money to learn flying i would leave it up to the CFI
for basic flying i doubt its going to be much help but they ‘might’ have you practice a certain manuever (patterns for example) if your weak on them but imo its doubtfull
sims are better in IFR training than basic flight stuff, they arent really used much for PPL (or thats my understanding)

Edit: Disclaimer, i am not a pilot in real life of any kind

I have a very small experience with real life flying, but I think using MSFS for real training is a bad idea. It is an amazing piece of software, but can teach you very bad habits.

I can imagine that you can use it for getting familiar to an area before you fly there in real life.

A lot of pilots’ discussion forums attract comment from simmers who think they know almost as much as the real pilots - or even in a few cases more.I’m always astounded at how quickly the real pilots know when they’re talking with a simmer rather than a real pilot.
Having said that I’m sure there’s a place for MSFS as an aid if used sensibly - but not for practical flying skills, I’d suggest.

The basic of flying is all about attitude-flying and crosscheck (VFR & IFR).
This should be learned under the supervision of a qualified instructor, in order to prevent bad habits.
Once you get to know the RWA procedures you could use the flightsim as a training aid to get proficient.

My take on this (CPL+IFR + Army flight training, not flying in RW anymore)

I recently had an introductory lesson, in a C152, and it quickly became clear that I wouldn’t have been able to do a solo flight, despite having done so in a simulator on countless occasions.

However, my time in sim wasn’t totally wasted in that at least I understood what each of the instruments were telling me and had a good idea of what my instructor was doing during the stages of flight that he had control. I had also taken a few simulated tours around the airfield in question, so knew about its layout and what scenery i was likely to see once in the air.

At the end of the day, my use of the sim is to allow me to live out a fantasy of flying aircraft that I wouldn’t otherwise be able to even get onto the flight deck. For me and for this purpose FS2020 does a cracking job and, with further improvements and lots of other aircraft, will only get better.

Flight sims are used for training systems all over the world. You can’t get a license just by sitting in a simulator, but they are great training tools.

I use a flight sim (VR) to aid my training, it sharpens me up before a flight and helps me prep in many areas between flights.

Also, the consequences of using this flight simulator for flight training could be disastrous for this community if the NTSB said Microsoft Flight Simulator was the main contributing factor into the crash of an aircraft.

Okay, first of all, this is patently absurd.

But overall, simulators can be great for flight training if used properly. Read the following sentence, internalize it, and accept it: flight simulators are procedures trainers. Now go back and read it again. You cannot and will not learn stick and rudder skills from a flight trainer, but you can practice flying procedures, approaches, touch and go’s, intercepting and tracking VORs. But you need to use the simulator to reinforce good flight instruction. It doesn’t work the other way around.

What I can say is that if you can handle the huey with VR in the other sim, the one with 3 letters, you can at least fly a smaller helicopter, as well as hoover a few meters over the ground (edit- deleted) . (With slow forward ore sideway movements to avoid getting into the vortex.)

But, the real pilot didn’t want to allow us to take off and land. He didn’t have that much trust after all. Certainly not without reason.

But he was quite surprised at how well the other actions worked.

(However, I would not try that with this non-existent helicopter flight model from FS)

I agree that there is a genuine concern with developing bad habits using these games to supplement real world training.

Even payware planes with realistic depictions of G1000 i would be wary off. Just a TINY change here and there from the real thing could lead to frustration/confusion when flying the real thing. The value will ONLY come when the simulation of such system is 1:1 exactly like the real thing. But for that there are Garmin training apps for tablets which I would prefer.

It does however come in handy for something. Because of its visual fidelity it might be of some value to rehearse a short cross country trip you are planning to do in real life. Or even warping to the destination airport to take a look at the layout. However if you just want to take a look at the layout of the terrain , pan around etc then Google Earth is unbeatable in that regard. If you want to fly then yes try MSFS.

Theres is also the current bad habit some simmers show when flying for real - they dont look out. Just like cellphone addiction they are addicted not to the world outside but the big glass cockpit displays. Countless times my CFI friends tell me they can tell a student whose a simmer 9 times out of 10. Always head down twiddling knobs.

But yes thats me, I would treat this for what it is - a home airplane game to be used for entertainment only.

Can a student pilot play MSFS during training, or is it better to set the sim aside for a while so that it doesn’t interfere with real world training?

I would say that a sim is great for reinforcing good instruction and reinforcing good habits gleaned from that instruction. They’re also great for pre-flying flights. I do that and I know tons of pilots who do as well. If I’m flying to an unfamiliar airport, I fly the flight in the sim beforehand. You’d be amazed how tough it is to actually see an airport, for example. And for instrument-rated pilots like myself, it’s super helpful to pre-fly the approaches you might be faced with.

But again, they’re good for reinforcing good training and good habits, not developing them. And I don’t care what anyone says, there is no substitute for being in a real airplane.

What I can say is that if you can handle the huey with VR in the other sim, the one with 3 letters, you can at least fly a smaller helicopter, as well as hoover a few meters over the ground with no problems.

That is a recipe for disaster, sorry. “With no problems” until there is a problem, and at that point you’re a passenger.

Let’s agree on fair weather, and no wind nearby

Okay, first of all, this is patently absurd.

But overall, simulators can be great for flight training if used properly. Read the following sentence, internalize it, and accept it: flight simulators are procedures trainers. Now go back and read it again. You cannot and will not learn stick and rudder skills from a flight trainer, but you can practice flying procedures, approaches, touch and go’s, intercepting and tracking VORs. But you need to use the simulator to reinforce good flight instruction. It doesn’t work the other way around.

100% agree. I use MSFS for both “Entertainment” and as a Tool to become familiar with the procedures and sequence of events (if you like, as “PART” of Flight Planning") for real world flight, I intend to make in the near future.

As both a VFR and IFR “Tool”, it allows me to first fly my intended flight in my own simulator, and become familiar with VFR landmarks, as well as practice IFR procedure I may need during my planned real work flight.

In doing so, I have found that it helps me keep ahead of the plane, and reduces the chances of an unexpected situations.

It does NOT self-teach me how to fly !! … but it does “HELP” to prepare me for some real world flights.

Example: Flying from the NE USA to Oshkosh, and practice and familiarization with the route, as well as the Notams Procedures at Oshkosh.

BTW: Pilot Edge’s SimVenture yearly event of Oshkosh is an experience , well worth taking advantage of … whether you are a Simmer or a RL pilot,
A remarkably realistic experience, with their Professional ATC services, and the addition of lots of other traffic, and congestion. 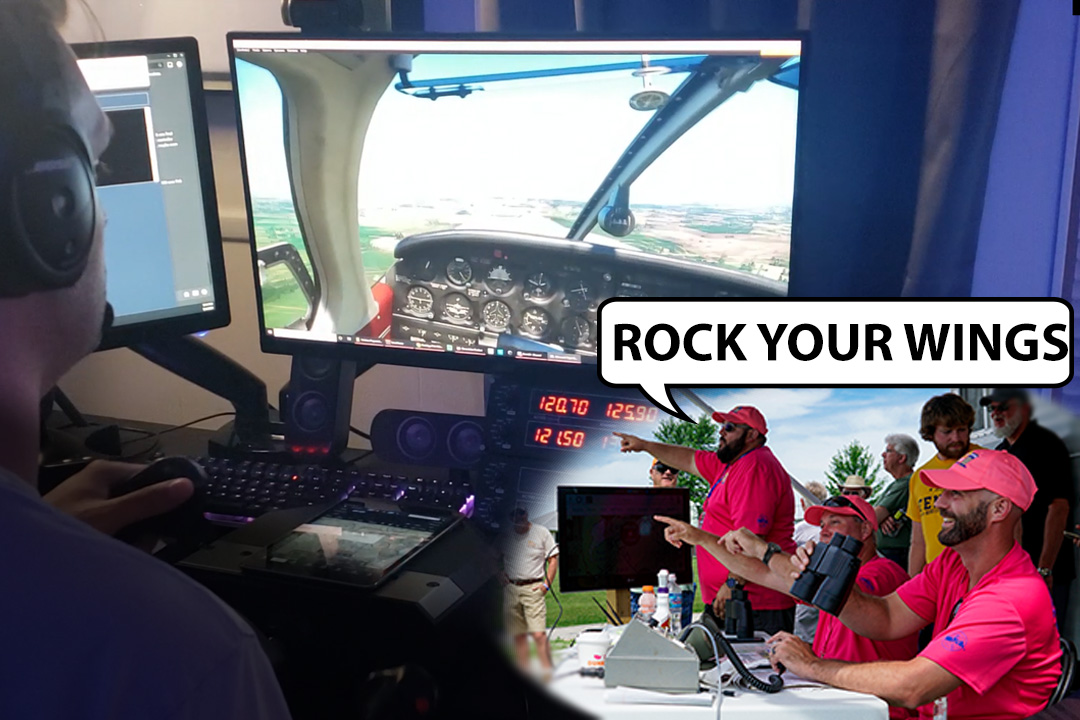 Whether you’re planning to fly to the big show this year or not, it’s worth checking out the 2021 SimVenture flight simulation event ahead of EAA AirVenture this year. The simulation led by PilotEdge emulates the EAA AirVenture notam procedures for...

This question comes up all the time along with “can a simulator pilot fly the plane if the pilots become incapacitated”. The answer to both is no IMHO.

That said, for our purposes, msfs2020 could be easily renamed “flight procedures simulator”. That is in fact what we are learning…