I’m using the experimental versions of that aircraft; have I to load the “switch version” and / or the new patch 0.6.1 ?

You should use the developer version for the most up to date version.

Or what reason shall I be obliged to use that version, while I was told that the better version was the experimental version ?anyway, I have ask if I had to record what I have asked and written in my message.

I thank you for those accurate informations. Have I to uninstall my experimental version before to load the development version ?

that’s the safer way to do it. You might also need to delete the flybywire/a32nx folder from the one inside the packages folder outside of the community folder. Because you’ll need to recalibrate your throttle using the new EFB calibration method.

I don’t find the folder “packages”, can you help me to tell me me where it is ? thank you

it’s the folder above the Community folder.

I’m a little bit lost now, because in that folder Packages, there is a lot of folders beginning by Microsoft… What is the good folder in this mass of folders ?

I’m on the Steam version and this is what my Packages folder looks like. I just delete the folder I highlighted. 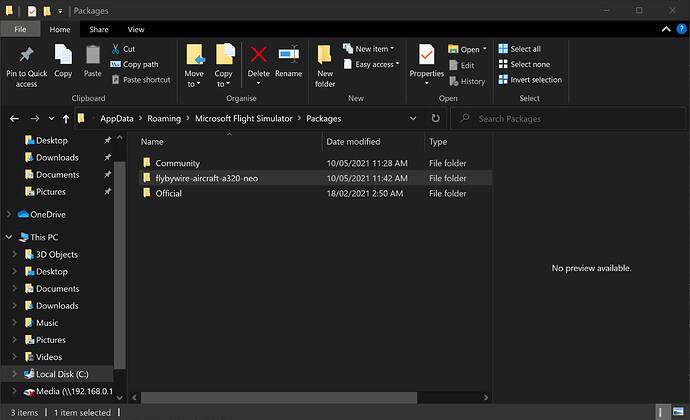 These are two different things. The aircraft itself is still installed in the community folder. The folder @Neo4316 showed you, is a separate folder, where some things for the A32NX get saved (for example the throttle config).

Certainly, the actual development version of A 32 NX is put in the folder “Community” and I have nothing apart from this folder. Why ?

Once you use the A32NX for the first time, the second folder is generated automatically.