In case you missed it on social media, our next scenery covering The Balearic Islands is now with Microsoft and Orbx for release. In the meantime here are some screenshots of these beautiful Mediterranean islands…

Welcome to the Islas Baleares / Balearic Islands, an archipelago situated in the heart of the Mediterranean Sea near the Iberian Peninsula. We have recreated the many marinas, ports and inlets across Mallorca, Menorca, Ibiza and Formentera with over 12,000 vessels moored and travelling the coast. We have also included brand new models and the popular local ferry services between the four main islands! 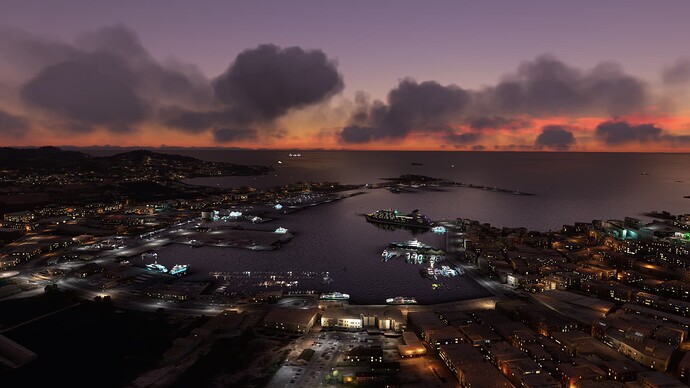 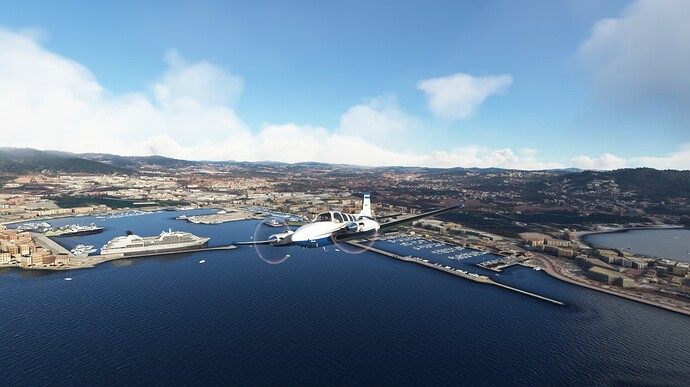 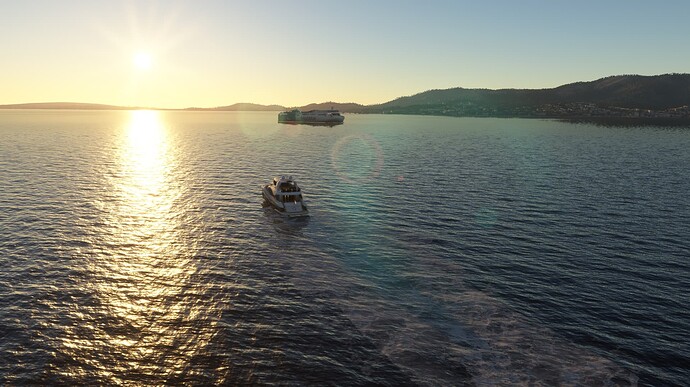 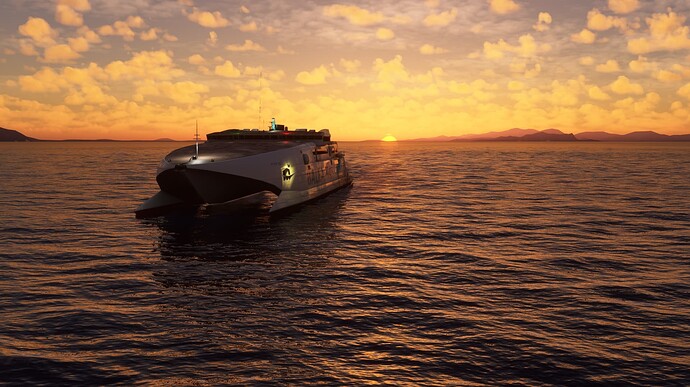 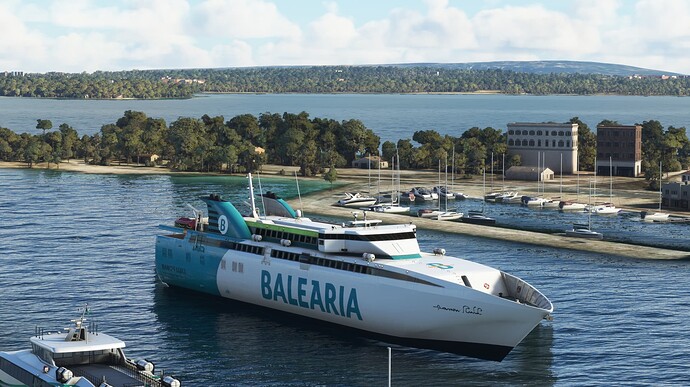 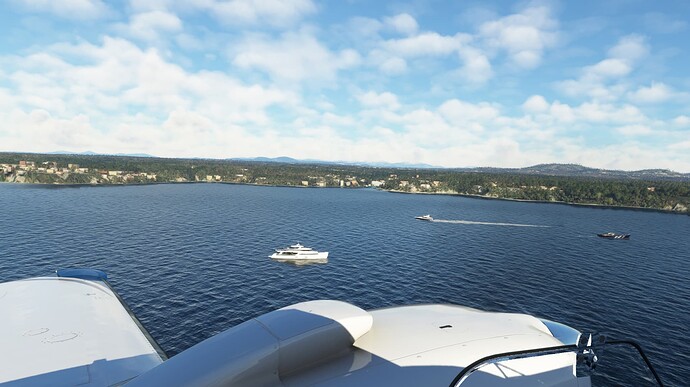 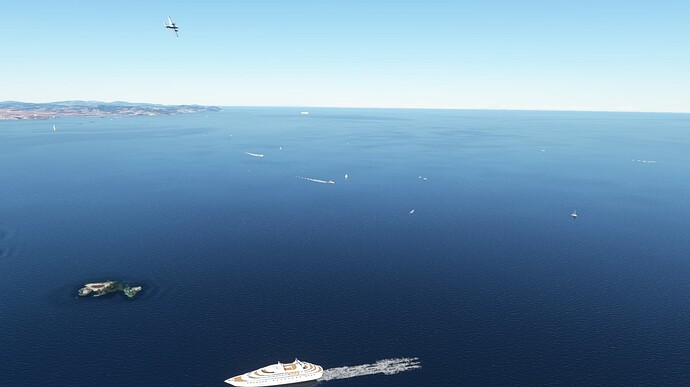 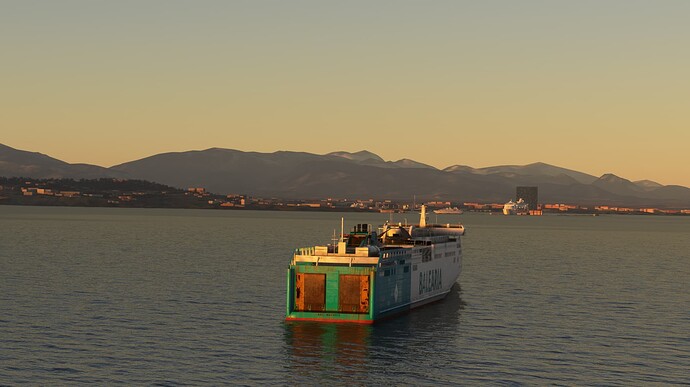 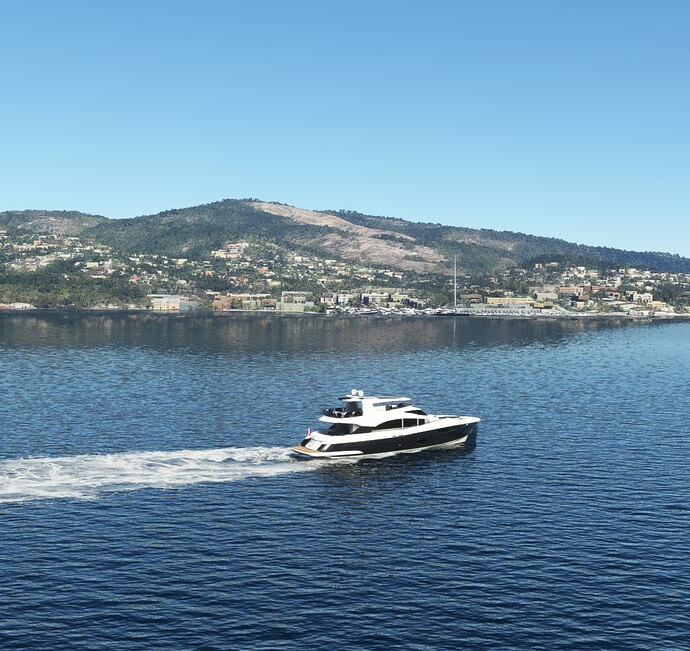 Great, will grab this as soon as it hits Xbox

Very, very nice indeed! Go on, have my wallet.

Will this play together with Henrik Nielsens freeware Global AI Ship Traffic Version 2?

Ok waiting for it to drop on ORBX Central…INSTABUY!

Good stuff. Any developments on a UK Southwest yet?

That freeware is broken again for some users, including me. Assuming it is working for you, can you see a lot of ships around the islands with it?

The South West would be awesome! It’s very busy though so I expect it will be a lot of effort? It would get my vote anyway, love the South East and excited for the upcoming sceneries.

Yes, it does certainly cover a larger area than UK South East, but I can’t think of a region they could make that would generate more sales, not least because almost everyone who has UK south East would buy it for continuity.

I believe they are a British developer so it makes sense to focus on completing the English coastal areas then moving on to Wales, Scotland and the rest of the UK.

I’m guessing, but I’d assume they would sell more copies focusing on the UK as most people are more likely to buy sceneries adjecent to ones they have already bought than elsewhere in the world, at least that would be my assumption…

That makes sense. I think that’s probably why they are doing the Virgin Islands, adjacent to their St Martin scenery and a bigger market in the US. Let’s hope the same holds true for the UK…

Ah that’s cool, I didn’t realise that. To be honest I only fly around the UK and have no idea where St Martins or the Virgin Islands are! I just checked and you’re right the Virgin Isles connect to St Martin so fingers crossed they do the same with the UK Southwest. It’s literally the piece of scenery I most want, along with an Orbx Great Britain South.

I haven’t even scratched the surface exploring the UK Southeast scenery.
Still lots more to explore!

Seafront have a new product page up for the Balerics with some new shots. Hopefully a sign it is about to drop

Vessels: The Balearic Islands is now available for PC and XBOX Series S/X via the MSFS Marketplace and Orbx (PC Only)

Releasing Today via the MSFS Marketplace and Orbx [seafront-balearic-islands-menorca1] Welcome to the Balearic Islands! The Balearic Islands/Islas Baleares is a archipelago situated in the heart of the Mediterranean Sea near the Iberian Peninsula. We have recreated the many marinas, ports and inlets across Mallorca, Menorca, Ibiza and Formentera with over 12,000 vessels moored and travelling the coast. We have also included brand new models and the popular local ferry services between the f…

I’ve just finished doing a quick look and see it works pretty smooth considering the bad weather encountered starting off at Menorca. So far I’ve done half lap of there and did half of Mallorca using the new Dornier Flying Boat.

I’d like to know if it’s possible to tweak up the render distance for the static marina boats? The Dornier is not fast and found just like the UK Vessels that they pop in far too late, I mean, I’m right over the marina by the time everything finally loads in. I’m flying at about 2000ft as well so pretty close. The active animated ones I can see from a long long way in many cases. I hope this can get tinkered with over time.

I’m definitely looking forward to the Virgin Is. and whatever else you guys have up your sleeves, things are starting to look good. The Oceans are coming alive. Great effort

There’s plenty to explore around the islands

We’re experimenting with optimization of the model library to ensure the boats appear as early as possible and taking into account some changes in recent sim updates that reduce the distance at which they appear. Rest assured we’re on it

In the meantime happy flying and we will keep everyone posted on the arrival of the future products and updates.

I’m guessing that this isn’t particular to just your scenery but all object LOD’s in airport sceneries too? I’ve noticed flying around airports now that parked cars not only pop in late, but they are often just a blank monocoloured car shape until the next LOD load in occurs and the car details reveal themselves.
Increasing my Terrain and Object LOD’s in the sim don’t fix the issue so I’m guessing it’s something Asobo have done?

Also, and I keep asking this, have you made any progress on a UK Southwest yet!?

Hi @Kjaye767
That’s correct. The restrictions on LODs apply to everyone so instead of an object appearing with for example 1 pixel and then growing in a more natural way as you approach it, it’s going to have quite a few before it suddenly appears now. It’s more apparent on the smaller boats than large cargo ships etc. We are looking at ways to improve the experience there for our sceneries though.

Re the UK South West - It’s on our wish list of areas to cover and probably one of the largest if not the largest we would have done. As such it would take a lot of time. We are a tiny team of 2 part time (probably less than 1 full time equivalent) developers so have to manage our workload carefully. Although we did some experimentation with the area before the UK World Update dropped last year, it is not currently in active development. We would also want to make use of our latest in-house tools rather than the ones we used for the experimental work early last year. So it is something we would like to cover, but it won’t be for quite some time I’m afraid.

Of course we will keep you all posted when new developments are nearing release.

Thanks for being transparent at least. I will continue to petition you at regular interviews.