I am trying to get a better understanding of the requirements and how to fly VFR within Class B airspace. I understand that if I was flying VFR outside of Class B airspace I would have to get ATC clearance prior to entering, once clearance was given I’d be given a squawk code and then proceed from there.

What I am trying to figure out is what about taking off under VFR within Class B? Example VFR from KSAN to KSMO.

Do I need to file a VFR flight plan with ATC? or do I just get VFR Clearance and Squawk code?

I’ve been flying IFR for awhile so it hasn’t really been an issue and my previous VFR was at un towered airports so this hasn’t come up yet.

I don’t believe that you need a VFR flight plan to fly out of a class B. Prior to taxi, you would need to contact clearance delivery and they would provide you initial climb instructions (Altitude and such) along with the squawk code. I believe its all similar to what a Class C provides.

don’t need a FP, but you have to call up clearance at first, before calling ground.

MSFS does it a little different than the IRL process. Taxi to the active runway and takeoff are handled like any VFR departure at any tower-controlled airport. Transponder is automatically set to 1200. After takeoff and leaving the tower’s airspace, Departure is contacted for Class B authorization and squawk code. Technically this has to be done before entering Class B.

Just second previous replies, in real life (did several VFR departures into Class B Vegas at KLAS for example) : no flight plan required and mandatory explicit clearance into the Class B from Clearance delivery. In MSFS… No really difference from a what-ever VFR departure

Thanks everyne, I appreciate the feedback!

Some airports are what as known as under the floor. Class B Airspace is like an upside-down wedding cake. 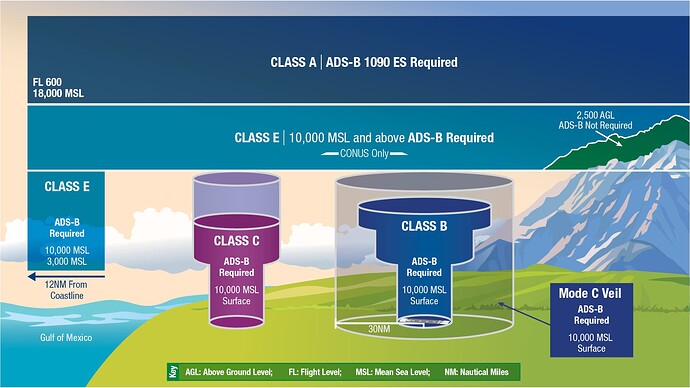 At those airports, you could depart underneath the class B airspace and maybe only talk to Tower. 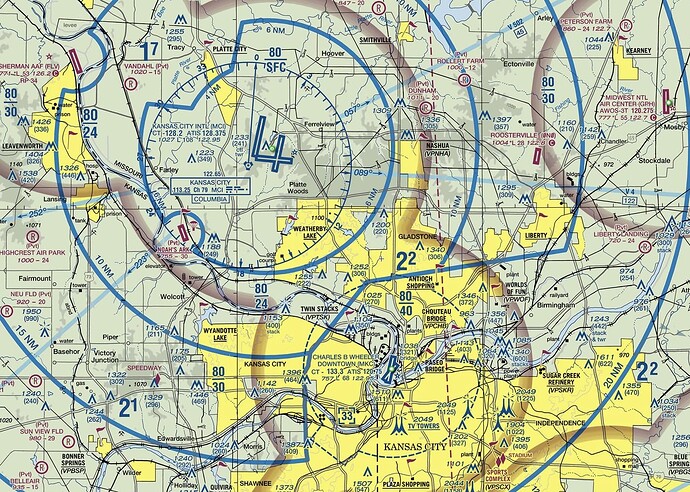 At KGPH underneath the KC Class B, all I had to do is remain below 4,000’ and talk to the tower. Once I cleared the B to the East I was good to go.

Note: You must have ADS-B now, which is not simulated in Microsoft Flight Simulator. So you will have to pretend to have ADS-B if you want to operate ‘correctly.’ MSFS is very poor in transponder simulation still stuck with the FS98 era with very rudimentary traffic capability without mods. 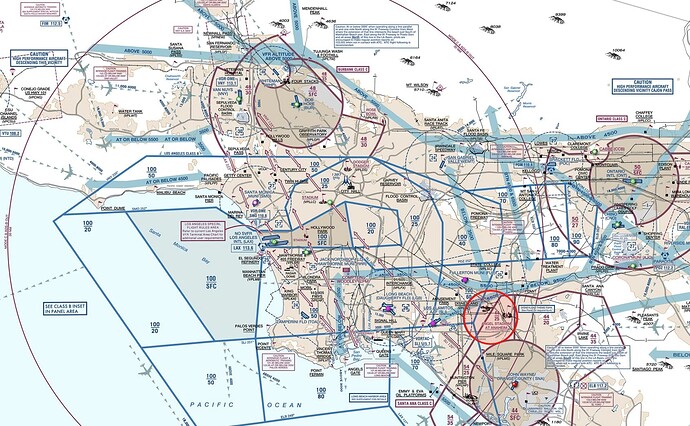 While these corridors are for VFR traffic, unlike operating under the shelf, you MUST have ATC clearance to operate in a corridor. 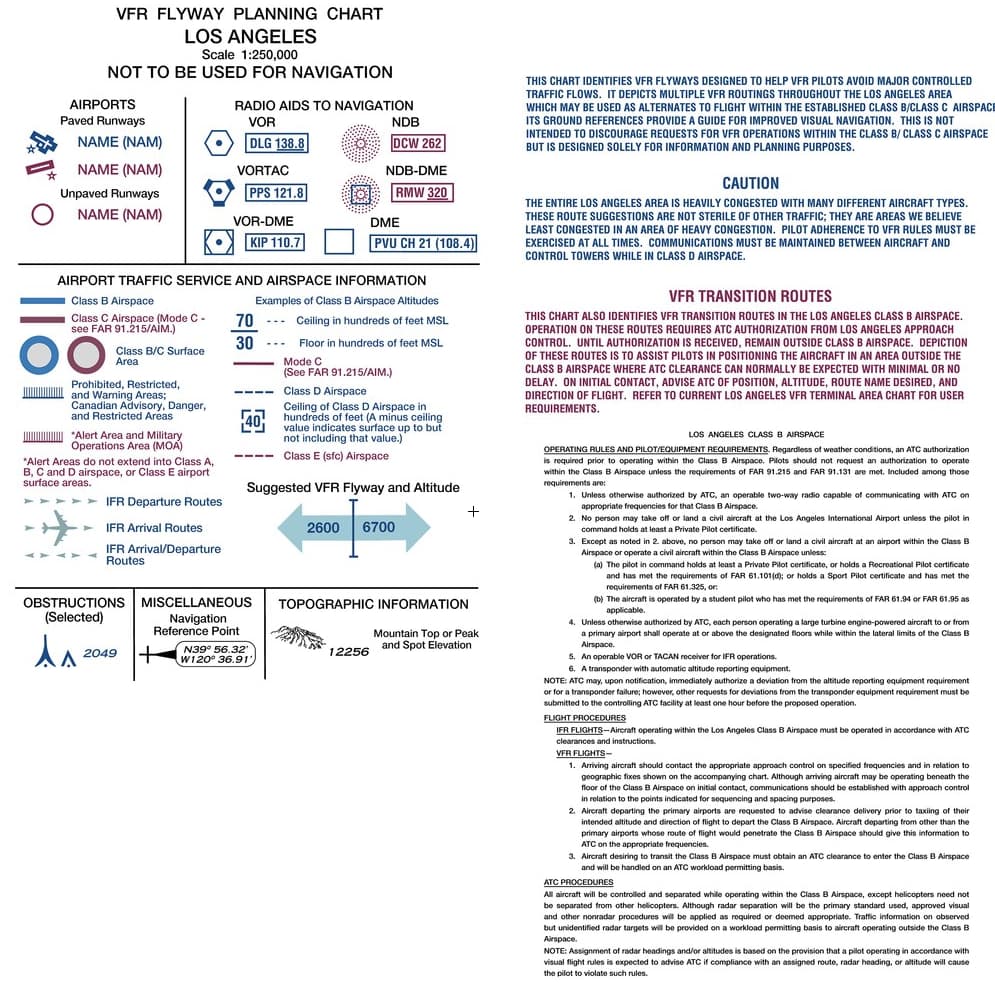 IMHO, I find it easier in the real world to file a flight plan and request flight following, or file IFR when dealing with Class B. With IFR you will gain sequencing and separation services. Also, when operating internationally, the rules for IFR operations tend to be a lot more universal whereas VFR can be a mixed bag.

IMHO, I find it easier in the real world to file a flight plan and request flight following, or file IFR when dealing with Class B. With IFR you will gain sequencing and separation services.

However, that’s what is so much fun about MSFS: you can fly a C172 into the KSFO Class B and not create a hazard to yourself or hundreds of passengers.

VATSIM is a really good place to put this stuff into practice. In fact a very good majority of my time on VATSIM is in SoCal and flying GA aircraft. It’s really, really fun once you understand it. I know both the San Diego and Los Angeles Bravos like the back of my hand though I keep the TACs with me at all times.

While these corridors are for VFR traffic, unlike operating under the shelf, you MUST have ATC clearance to operate in a corridor.

Do you you call the Special Flight Rules a corridor ? I love to use it as it doesn’t required any ATC clairance (just need weather minimum). My fav way to cross LA airspace. As a simple (french) VFR pilot, it’s a pleasure to fly it 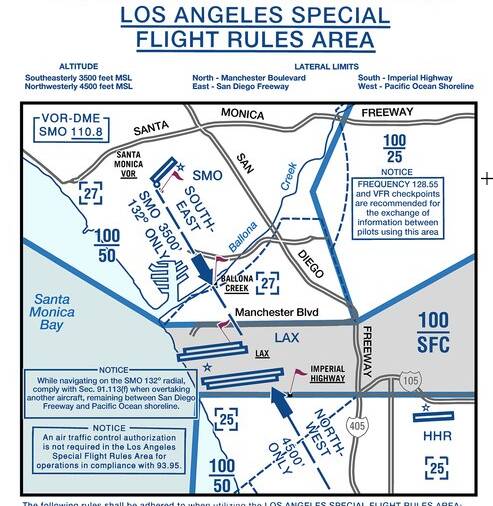 I was thinking if the named routes like the Mini, Coastal, Coliseum, or Hollywood. The Magenta double arrows. I didn’t consider the LA SFRA or the Hudson SFRA.