Using a mouse to operate the cockpit knobs, switches and buttons when flying is an immersion killer for me. The remedy – the hardware panel, built with VR in mind:

The panel (together with Honeycomb Alpha Yoke and Saitek throttle) covers most of the buttons and switches in light GA plane like C172 classic. However in my case the placement of controls is based on the Tecnam P2008 JC MkII I fly in the real world to allow muscle memory consistency between simulated and real world flying.

When flying in VR with Reverb G2 I bring my desktop (resolution lowered to 1280x720 for smaller size in the cockpit and better legibility) to my virtual cockpit (using Folow Me function in the WMR Cliff House) and I place it on my virtual knees as the oversized kneeboard with following apps:

Pictures of the panel: 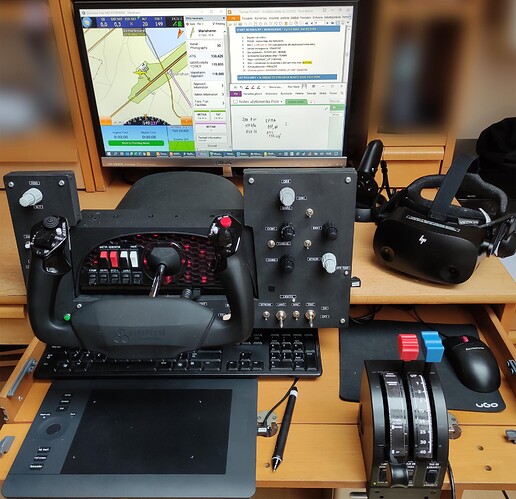 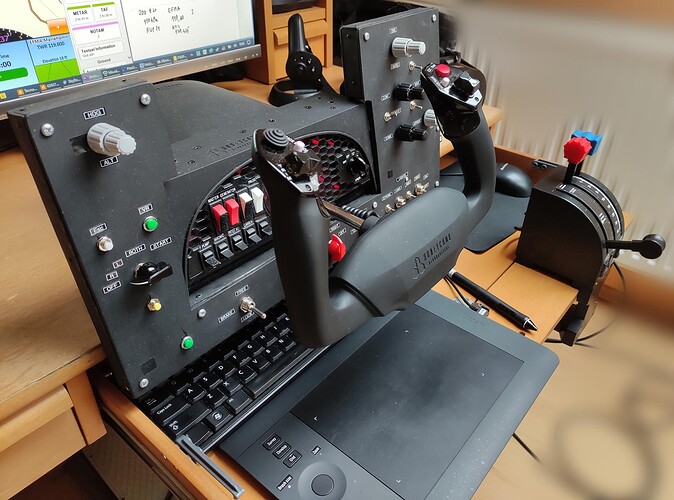 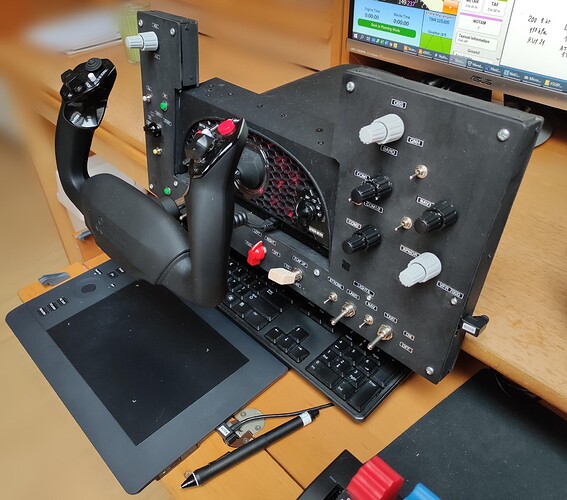 The shape of the panel is a bit weird, for purpose: 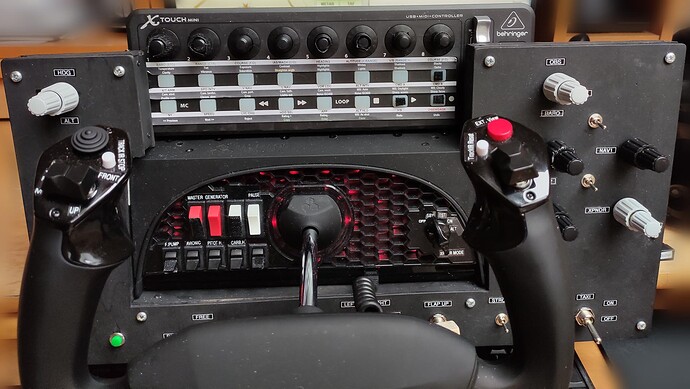 Panel with AirManager on 10" touch display for non-VR flying: 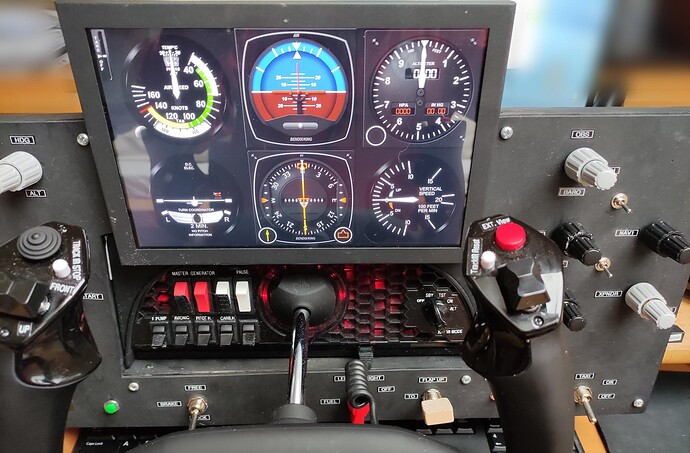 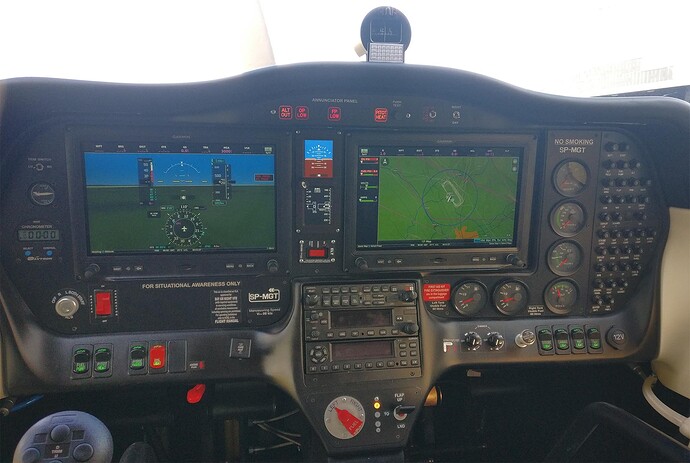 In the early days I would draw up the different radios using paint.net. I would have crosses where holes were to be drilled and cut. Then I would print it out on full page sticker sheets. Then adhere it to a piece of clear plastic. did a whole radio panel like that. I may have the original prototype here somewhere. Ill look for it.
Found it. It was mounted to a small monitor. 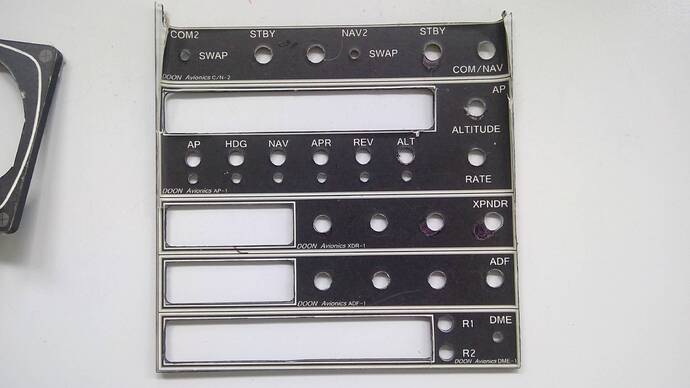 This time I focused on making the panel easy to operate when wearing the VR headset. I can’t see the panel then, so how it looks is not as important vs how it “feels” (sense of touch and muscle memory/proprioception).

My older panel with neat rows of encoders, buttons, switches and LCDs covering the rectangular panel didn’t work well in VR, I often reached for the wrong button, switch or single (vs. dual) encoder.

This inspired me to build this oddly shaped panel, utilising dual encoders with pushbuttons as the most important component. When I grab one I can set the whole and decimal part of the frequency and then swap it between standby and active without letting my hand go, just with one dual encoder with pushbutton. So the dual encoder replaces three controls: 2 encoders + pushbutton.

I’m hoping that muscle memory will help me with mine. I wanted it to cover pretty much everything in the steam gauge C172. You’re right about it being a bunch of knobs. I’m hoping that by grouping them and using different type knobs for each group will make it easier to navigate.
If worse comes to worse I’ll just sell it and start on a new one.

Good stuff. Maybe someday I would like to build something like that for sure.
At the moment, I am getting very good using the keyboard while being VR blind.

The build time for somebody like me, with very limited DIY skills and tools:

Cheaper alternatives to LeoBodnar components are available but I wanted seamlees operation with dual concentric encoders, from single vendor with flight sim experience.

Given the result (flying without touching the mouse, easy accees in blind to all the controls) - I consider it a good investment.

How do you get the encoder signals into MSFS? What software has to be run to have the LeoBodnar show up as a control surface?

Encoders are not analogue control surfaces (axes). LeoBodnar’s board acts as HID device (e.g. joystick) with 64 buttons directly assignable in the sim. Each dual encoder is visible as:

Encoders have detents when turned, each detent equals button press.

How did you integrate the Behringer X-Touch? As far as I know, this device only processes midi signals. How do you connect this to the Flight Simulator? Have a Behringer device here myself (BCR 2000). Would be cool to adjust the heading or frequencies … 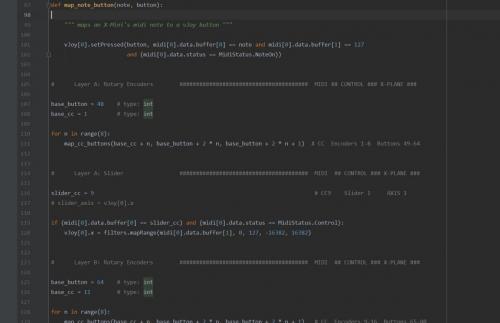 This FreePIE script will let you use the Behringer X-Touch Mini to operate many of your sims knobs, buttons and sliders. The Mini is an inexpensive (~50$) midi controller that can be bought just about everywhere in the world, and may be a cheap...

Since I could not find anything about it, I wanted to mention that the Behringer X-Touch mini MIDI Controller works flawless in FS2020. I used following guide: xmini2vjoy.py - Utilities - X-Plane.Org Forum [IMG_6417] The X-Touch mini is a free programmable digital MIDI Controller designed for musicians. It offers 8 rotary knobs with pushbuttons and lots of buttons in 2 layers. As always, people find ways to use it in other ways. A lot of people use it for manipulating photos in lightroom. For…

Thanx for this info + link

In non-VR Behringer X-Touch Mini works nicely. For VR is a bit tough to identify the knobs in blind, by touch only - this is why I designed my own VR panel with dual rotary encoders (5 functions in one hand position) placed well apart.
If you would like to use Behringer in VR, consider adding some suff (velcro? glue some oddly shaped plastic?) to the knobs/buttons for a touch identification.

The propwash dual encoders are less costly than the Leo’s. His stuff is pretty expensive overall.
3-5 hours design time??? It took me that long just to get a general idea of what I wanted and it’s rough placement on the panel. At least another 6 to “build” the faceplate for the laser and CNC work. Another 30 or so to design the underlying support structure and enclosure. 50 hours of 3D print time. 8 hours to program Mobiflight for 129 inputs. I won’t even be ready to wire the whole thing up until next weekend.
Sometimes I miss plain old wood and a drill…