While we can walk around I think this sim really needs a VR style transport. I hate using the drone camera.

I can walk around the airplane a certain amount. Anything more would require a hangar sized VR room.

I was marveling at the life sized detail of my airplane I could see in 3D.

Thinking about this more, it could be a third camera mode specific for VR. This functionality is in nearly in every VR game, so it should be easy to implement.

I’d vote for that!

Indeed, MFS is lagging behind X-Plane in this department.

I can move around the interior just using the cockpit camera. I have buttons mapped to translate forward/back/left/right/up/down. So all I do if find a quick view that turns me around, activate that, then use the translate commands to move throught the interior.

I also find that if I activate “home cockpit mode” in the camera settings then the pitch/yaw cockpit camera axis commands also work so I can turn myself around easily and then use the translate commands to reposition the camera anywhere.

Isn’t this good enough? I don’t find this limiting.

I’m talking about walking around outside the airplane and even checking out the airport.

There is some amazing detail you can see in VR that the external camera doesn’t seem to capture in the same way. The camera translations only let you move a small amount. In the G36 I can’t sit in the back.

I can stand up and clip out of the airplane but I’m limited by the fact it’s a full sized airplane in my office.

I’m talking about walking around outside the airplane

Understood. The cockpit camera used to allow us to go anywhere inside or outside all the aircraft. But recently some of the aircraft, especially the stock aircraft, prevent this free movement so you have to use the drone camera to get outside. I didn’t realize the drone camera limited the amount of detail that could be seen though.

While we can walk around I think this sim really needs a VR style transport. I hate using the drone camera.

I can walk around the airplane a certain amount. Anything more would require a hangar sized VR room.

I was marveling at the life sized detail of my airplane I could see in 3D.

You can use one of these and simply push your eyepoint camera forward out of the cockpit and have a free mobile transport/camera. Or you can just delete the 3D models and drive around as a free cam.
Unfortunately more and more 3rd party addon devs are locking virtual cockpit eyepoint freedom like Asobo has for the default aircraft now.
Wish I knew what ini value to change for this. 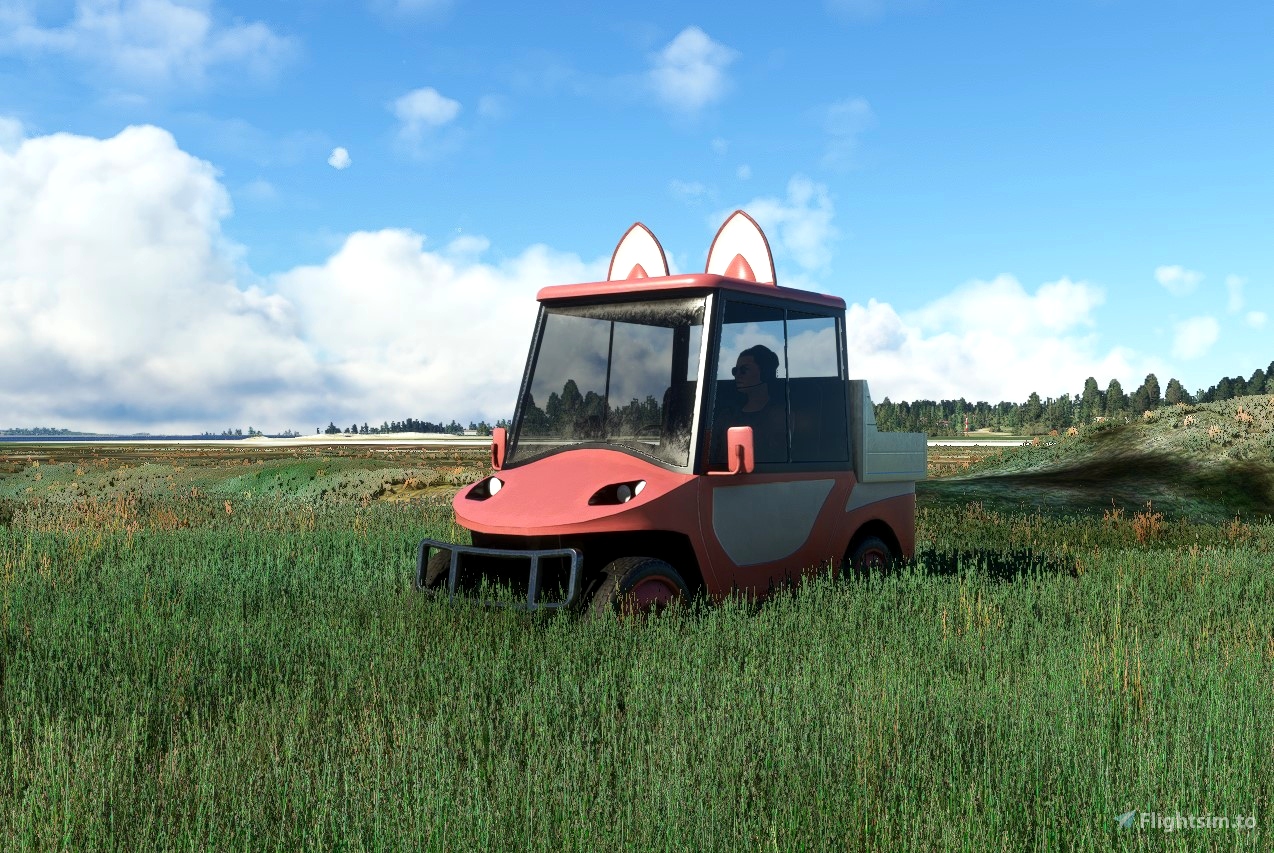 ✓ Airport Buggy is a Microsoft Flight Simulator 2020 mod created by WombiiActual. Download for free to enhance your experience in MSFS 2020.

If any of you haven’t done this, try “safely” walking away from your airplane about 5 to 10 feel. This wouldn’t work as well with an airbus. It’s amazing how detailed the exterior models are in real life 3D size.

That buggy is fun. However, it made me super nauseous.

I have done this and you are correct. It is a amazing view. When i park the plane, I stand up for real, reset my vr view center and walk through the plane to outside. I can almost do a preflight on the left side of the plane in vr by actually walking. If only we can use the vr controllers for locomotion to get by real obstacles in the real room. That would be totally immersive. I would be outside the plane in PWK,where I got my real license, in MSFS and it felt like I was really there again years ago.

The external camera view doesn’t resolve to that same level of detail. We just need to fly the sim in an empty hangar.

Even just a hangar view would be great.

But I’d love to be able to see some of the scenery up close too. I’m sure much of it wouldn’t hold up but would still be cool.

hm, interesting. I guess the only way to really accomplish this now would be to use the drone camera. You could probably assign movement to your VR controllers for when you’re in drone mode. But, I agree, a proper “walking” around would be neat.

You can use the drone function or simply map the native eyepoints to hotkeys…(mapped to my hotas setup)
I’ve been doing walkarounds and exploration since Flyinside FSX.

I've been a PC Gamer since 1997. From flight sims to RPGs PC Gaming has been my go to hobby. In 2012 I was introduced to the wonderful technology called Nvidia 3D Vision, and seeing immersion past a 2D screen. Now here we are years later with...

A few updates ago I could do the same thing where I could move around the whole aircraft. But now all I can do is move around in the cockpit. It’s as if a forcefield has been added that prevents you from leaving the cockpit. What good is purchasing an aircraft that has all the furnishings, like the new PMDG 737-700 business class aircraft if I cannot go and sit in a firstclass seat and enjoy it.

Is there a way I can do this? Would really appreciate any advice

I had already posted this topic here before, but there is still no sensible solution for VR users. I wrote back then that the developers put a lot of effort into developing their planes/sceneries/textures, but I don’t actually notice anything in VR. I mainly just sit in the cockpit. Except during the flight itself or when pushing back, I use the drone camera, but only circle around the respective aircraft. I find the whole camera handling in MSFS too complicated. The easiest, like in a first-person shooter. Four buttons to move around and a drone camea for everything in the air. That’s all what I need …

Yeah it would be nice if we could just walk around. I’d love to the walkaround in VR, or get out of the cockpit at the end of a flight.

I find the entire camera system as a whole needlessly confusing, maybe I’m just too stupid. But I end up pressing End/Ins and I never know what camera I’m going to get, external, drone, different outside. I guess I just don’t understand the logic or why we can’t just have a button for each. When it’s time to switch back to cockpit it’s again just randomly guessing what to press until I’m back. Wasn’t it in FSX and before I think S for next camera and Shift S or Ctrl S for prev. camera? Now it seems to be submodes and…I guess I just don’t understand it. But on the grand scheme of things is the least of my concerns.

I’ve used the drone camera some but it’s really cumbersome. It requires what seem like dozens of key mappings to use and is nearly impossible with a headset.

Also, it doesn’t seem to have the same level of VR realism that you get when you physically step/clip outside the airplane. The level of detail is amazing as you see everything life sized.