Weltfliegers: Aviation Pioneers of the 1920/30s

Want to start a topic about pioneer flights of the interwar period.
These pilots were fighting weather and compass - something we can re-enact, even without their exact planes (ah, the Fokker F.VII…).
I myself will focus on german (and russian) pilots. 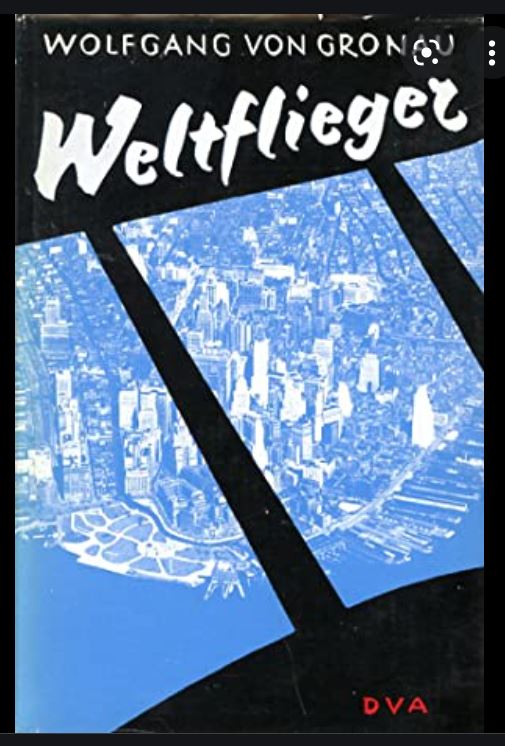 Had last week created the PLN of the 1932 world circumnavigation by Wolfgang von Gronau (intended to use the Ju-52 Float…) but learned tonite that his Dornier Wal is coming (Oliver & Joerg: Get you a case of beer for that!) so he has to wait until delivery. 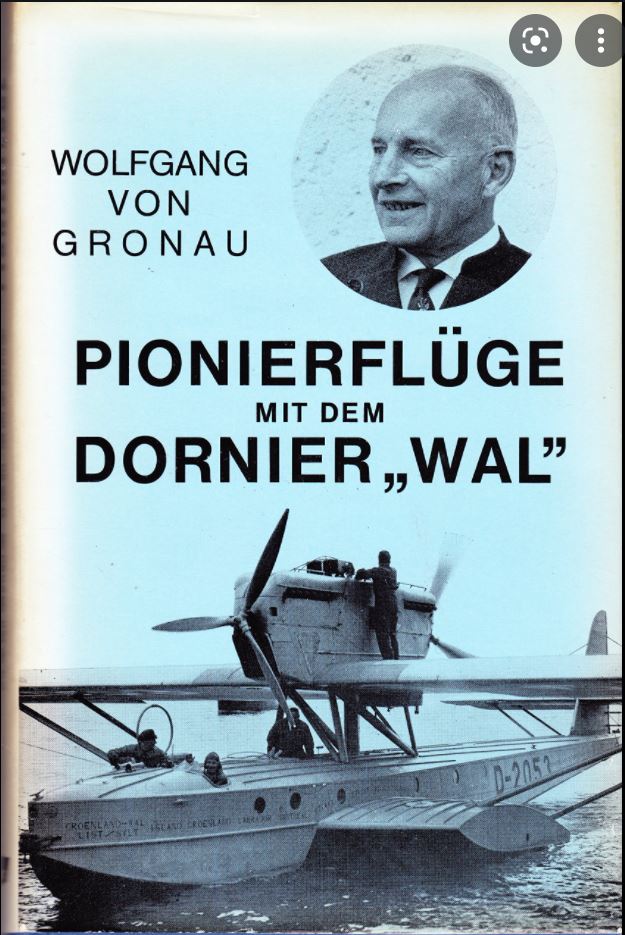 Lets start instead with some other man…

Gunther Plueschow: The three years of the Condor

In the the 1920s he did the first overflights (with photo/films) of Cape Horn, the Cordillera Darwin, the Torres del Paine and the Southern Ice Field - were he fatally crashed. 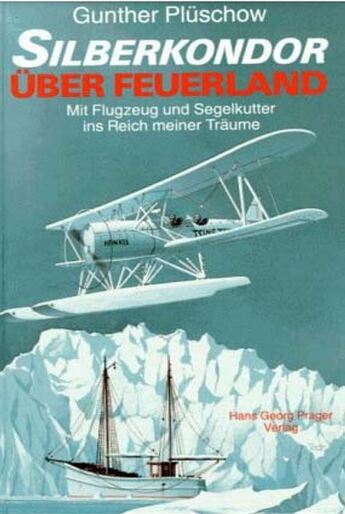 First flight:
G.P. made his base in Agostini Fjord (see WP) and explored the area for weeks with many water landings.
The PLN is a condensation: from Dawson Island to Ushuaia (where he got a royal welcome).
PION_plsch_1.PLN (3.5 KB)

Pics from his 1929 book and the sim are compared, more of his flights to come. 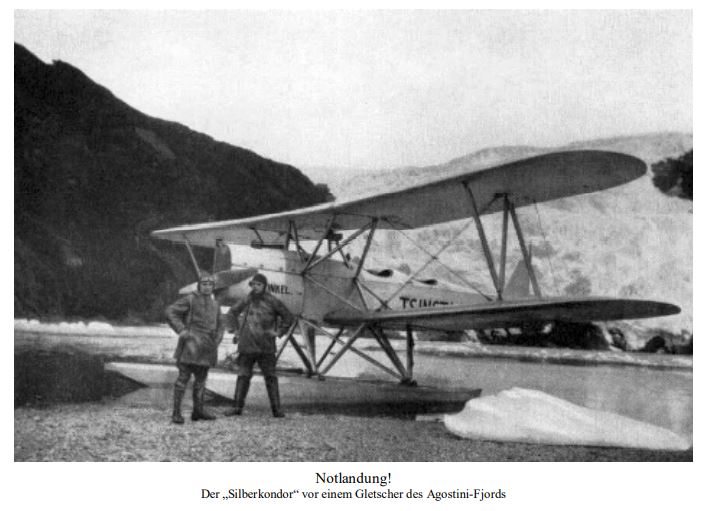 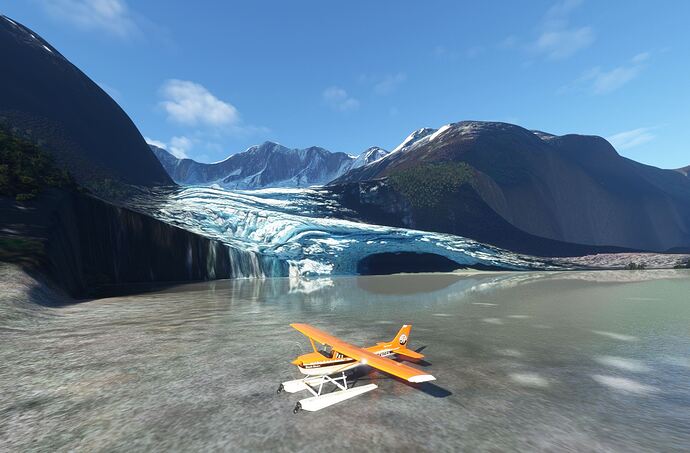 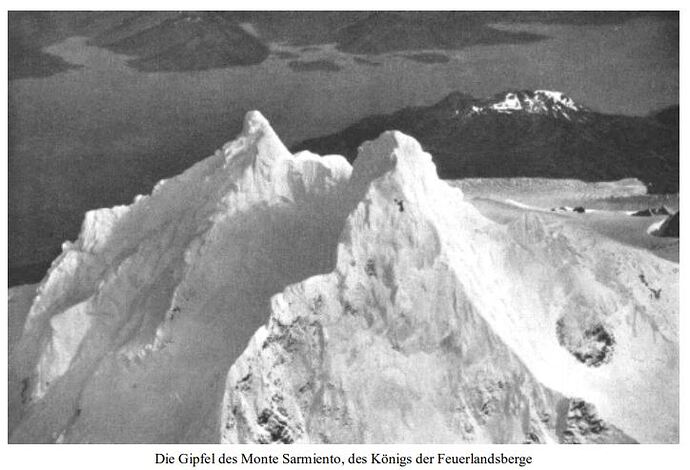 I have been wondering why there is so much focus on historic planes in the sim. But I enjoyed the Junkers and read a lot about its usage and flew several Lufthansa routes from the 1930’s with it. Maybe that’s the right approach with those planes. Read about them and relive the flights with celestial navigation and dead reckoning.

Plueschow cont.: the Towers of Pain

G.P. flew via P. Natales to Lake Sarmiento, establishing a base for several months. From here he explored the Torres del Paine and made forays north along the eastern side of the Southern Patagonian Ice Field.
Condensed PLN:
PION_plsch_3.PLN (5.8 KB)

He and his mechanic/cameraman Dreblow had several close calls due to bad weather plus engine trouble and almost froze to death in the open cockpit.

Same perspective, note absence of the “towers” in the sim: 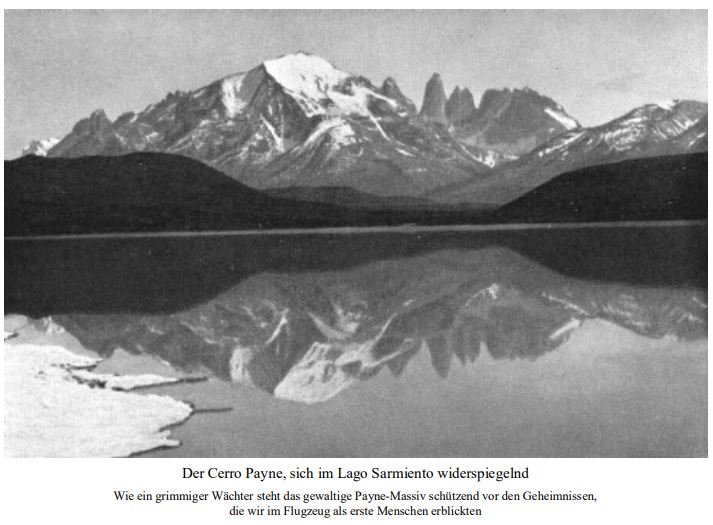 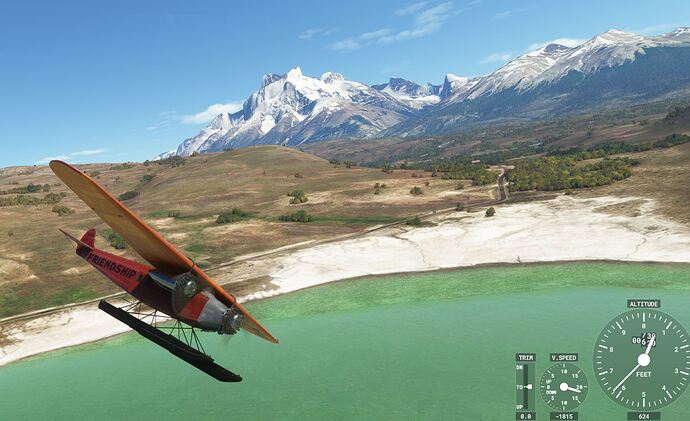 The single engine Fokker would come close to his Heinkel in many ways - but unfortunately has no floats to land in front of the glaciers. But the lure of wood & canvas makes the 3M now a better choice than the 172. 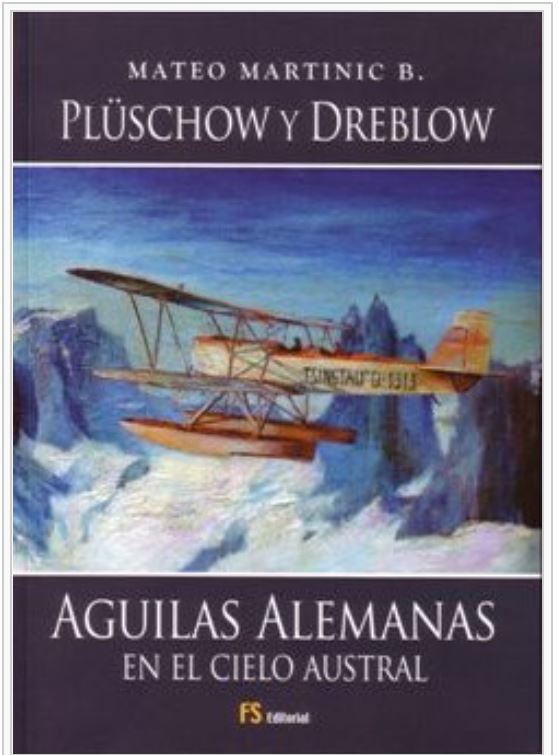 Thanks for sharing, @RegentFalke4131 ! Great idea to contrast the flights with their historic photos!
Recently I’ve finished reading “Amundsens letzte Reise” by Monica Kristensen. It describes in detail the rescue mission following the crash of the dirigible “Italia” in May 1928 on its way back from the North pole. A lot of airplanes are involved and this is one of the most complex and long-lasting rescue missions happening during the early days of aviation.
I’ve recreated the ferry flight of a brand new seaplane Hansa Brandenburg W.33 from its production facility in Horten (Norway) to Flatøya (fuel stop), Kristiansund (fuel stop), on to a forced landing near Indre Kvarøya due to lack of fuel, from where it was towed to the navy port of Tønnes, where it refueled and continued its ferry flight via Bodø to Tromsø.
I flew the first two legs with the Grumman Goose, using only the methods available at that time (map and compass). It’s a lot of fun to find your way across Norway with all its fjords and costlines.
After the first two legs I realized that the Grumman Goose is almost twice as fast as the W.33 was, so I opted for the Zenith CH 701 STOL on floats which has similar speed and range as the W.33.

I have to admire the bravery and patience of the early pioneers. My flight sim crashed (again) during leg three and I haven’t restarted the trip since because it really gets looooong and boring to hand-fly that airplane along the coastline. They must have fought not only weather and navigation, but also sheer boredom and sleepyness on their 5 hour plus legs.

I can highly recommend the book, a lot of airplane adventures described in much detail, an exciting read!

By the way the Dornier Wal was the airplane of choice that Amundsen, who took part in the rescue mission, tried to lease or buy in Germany, but due to the lack of funds they had to settle with a prototype of a Latham 47 in which they became missing in action, never to be seen again.

great topic, a nice flight is the london to melbourne flight of the Uiver(dc 2) 1934.
the junkers will do.

Great thread… I love reading about the pioneering flights of this period.

btw, there is a nice payware scenery available for the Torres del Paine National Park area…

It’s not perfect, but a definite improvement on the default scenery.

This is as close to the photo as I could get. 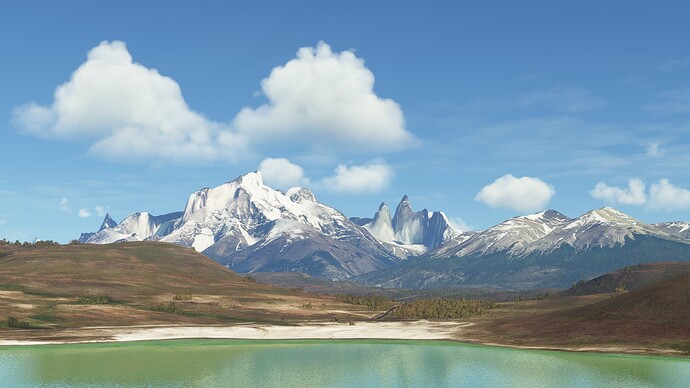 Link to the scenery at simMarket:

… thx SuperSonicDodo, will grab the new Amundsen book!
After Plueschow I will come up with PLNs of Hans Bertrams trip:
flew Berlin - Australia and back with a Ju W33 in 1932, including a famous forced landing.
Gonna file thru may Dads old library for his “Flight into Hell”…

and thx to Astronut71, looks like a massive improvement, hope we will get this peaks as well in “our” sim:
Cerro Torre Los Glaciares 3D National Park-FDainese-Cerro (x-plane.org) 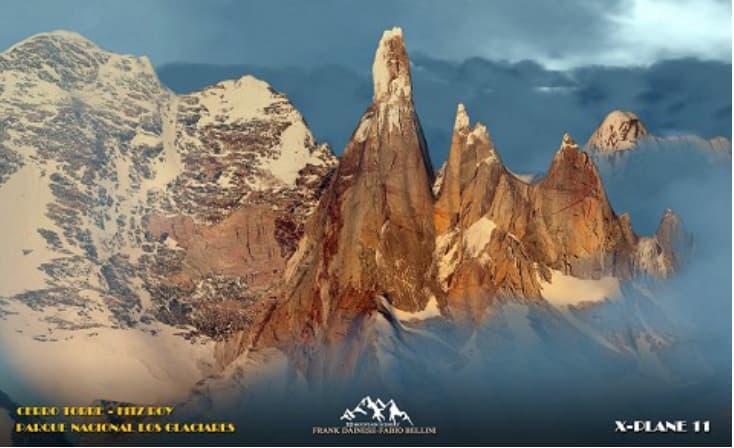 great that the devs focus on such planes, its what MSFS is made for!

Glad to hear, keep us posted @RegentFalke4131 ! This thread encouraged me to recreate more „pioneer“ flying in the sim because you guys are right, MSFS is great for that.
There‘s an entire flight plan adventure for Elly Beinhorn’s solo Americas trip on Flightsim.to. I’m waiting for the Klemm 25 to come out to fly it, although I suspect I’ll experience the same effect as in Norway: looong uneventful flights among them and no autopilot to help with it.

I read Elly Beinhorn’s autobiography and in it she mentions how great the Messerschmitt Bf-108 Taifun was with its autopilot (very innovative at that time). She actually read magazines (!) and slept (!!) during flight. (The only modification to the Taifun that she requested was to add curtains to the cockpit windows

, which the manufacturer did).

Once when she woke up after a short nap, she would spot the nearest railway track, follow them to the next station and read the signs to know where she was

Unthinkable in today’s aviation world. In some ways, flying was easier back then. No airspaces, no risk of colliding with other aircraft, no radio…
(Ok but no VOR, no GPS, crazy border crossing procedures, unreliable airplanes and a lot of uncertain in weather reports, so I’m not saying it was not a great feat - it was, and many died in the process.)

To make it clear, it’s not exactly an aviation book. It’s a very thorough factual description by a polar research scholar with a lot of footnotes and politics. It’s a fascinating read nevertheless and the aviation parts are a good bonus.

You reminded me that I own “Flight into Hell” by Bertram, too, but never read it! Thanks for the reminder, that’ll be my next book to read.

… if you are into Klemms and German aviatrixes - please refrain from an end like hers after a bad sim landing:

Mrs von Etzdorf‘s fate goes to show what extreme dedication was required to pursue flying during those times. Similar to Melli Beese who also committed suicide in the wake of a crash landing that seemed to mean the end of her aviation career…we don’t remember these pioneers enough.

In 1929 G.P. did mothball his plane in P. Natales and returned to Germany to raise money, write his book and show movies. 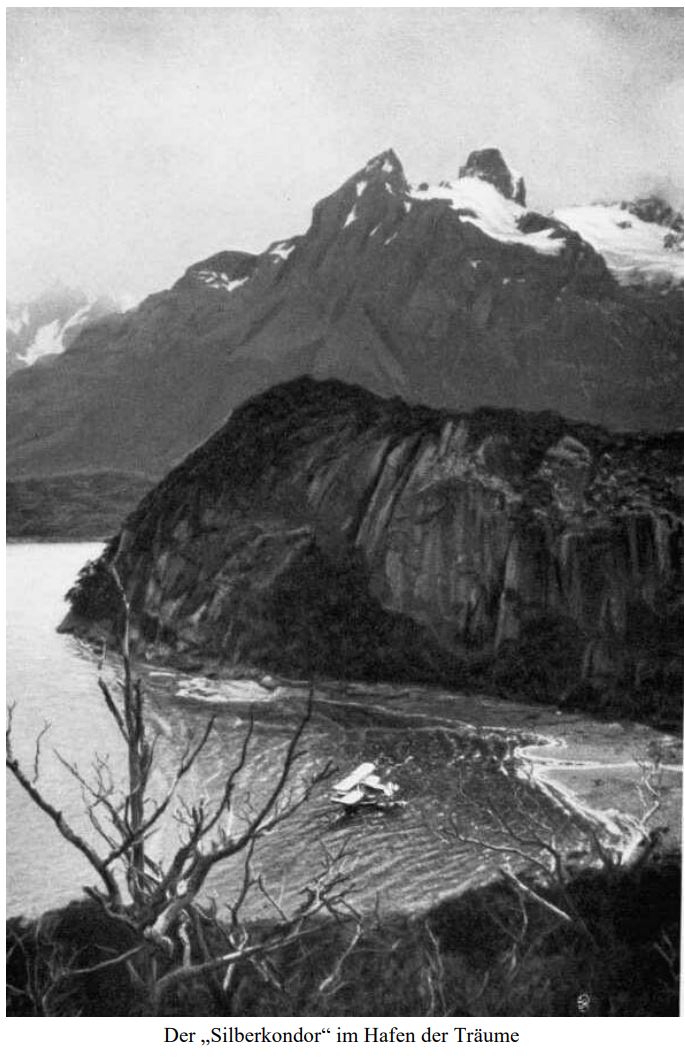 When he returned he found the Heinkel partially eaten by rats but after repairs did fly for weeks again over uncharted territory around the Southern Patagoniean Icefield. He crashed his plane on Jan 26, 1931 into Lago Rico, killing himself and Dreblow. 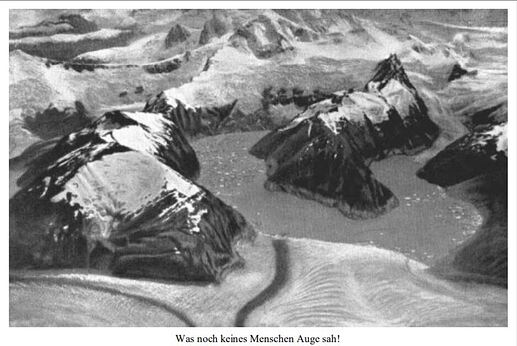 The PLN is a semi-fictional condensation of this last expedition, taking you to one of the most remote and beautiful areas on earth.
PION_plsch_4.PLN (6.0 KB)

This Pacific side has almost constant bad weather, is virtually uninhabitated and rarely visited by people, even today.
Land your plane among the ice-floes of many calving, unnamed glaciers and return along Lautaro Volcano (11.000ft) to the Pampa.

Several monuments for the fliers have been erected in the area, a full-scale replica of the HD 24 W is on display in a hangar in Ushuaia - and a great fan-page put up (in German):
www.Gunther-Plueschow.de 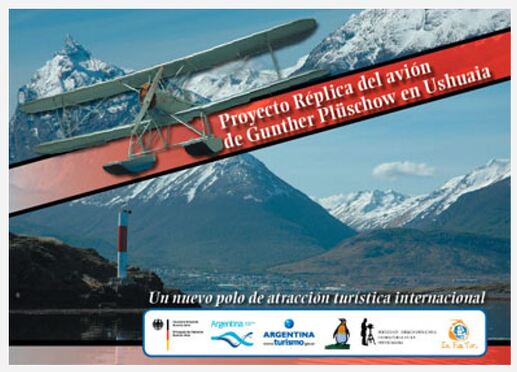 we stay in Patagonia, still on the Pacific side of the sky: 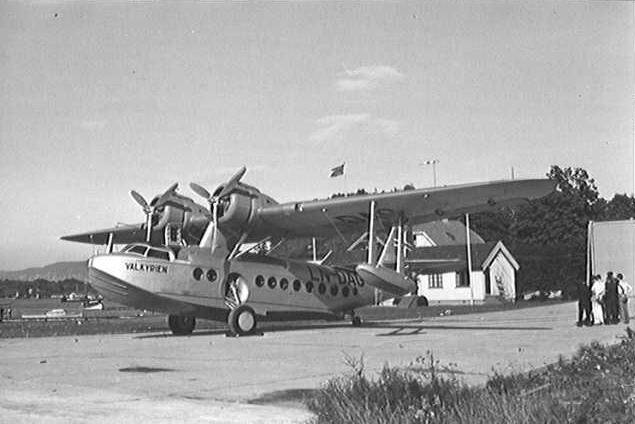 In the 1930s the Chileans established a route from Puerto Montt via P. Aysen to Punta Arenas, the most challenging air transport enterprise of its day.
80 years since the arrival of the Sikorsky S-43 to the National Air Force (tallyho.cl)
They settled on Sikorsky S-43 Flying Boats and even created a seaplane base out in the boondocks at Puerto Eden (WP labeled).
Lieutenant Rodolfo Marsh Martin and the creation of the Experimental Line to Magallanes | The Austral Press (laprensaaustral.cl)
Weather is usually bad: strong winds, low cloud base forcing you close to the water surface, no room for manoevres if you took the wrong fjord. Good dead reckoning and pilotage is essential in this uninhabited maze of islands and mountains. Small wonder that tragedy struck:
The deceased experimental line to Magellan and the arrival of Lan to the Austro | The Austral Press (laprensaaustral.cl)
Two PLNs: North-South and return:
PION_chile_sikorsky_NS.PLN (5.5 KB)
PION_chile_sikorsky_SN.PLN (5.5 KB)

He was dodging terrible weather, engine troubles (had to ditch in the open sea of the Bay of Bengal, and was towed by passenger steamer into Rangoon…) - but always had a great welcome and too many parties.
Aleuts:

I have chopped up the trip into 7 stages, created with SU7 where you couldn’t start directly from the waves to there are avatar airports nearby to teleport from(not sure yet about improvements in SU8…).
His stopovers can be deducted from this pic from my yellowing copy of his book “Weltflieger”, some of my WPs are detours he did take (due to storms, he also prefered to fly over water as he had no amphibian…) 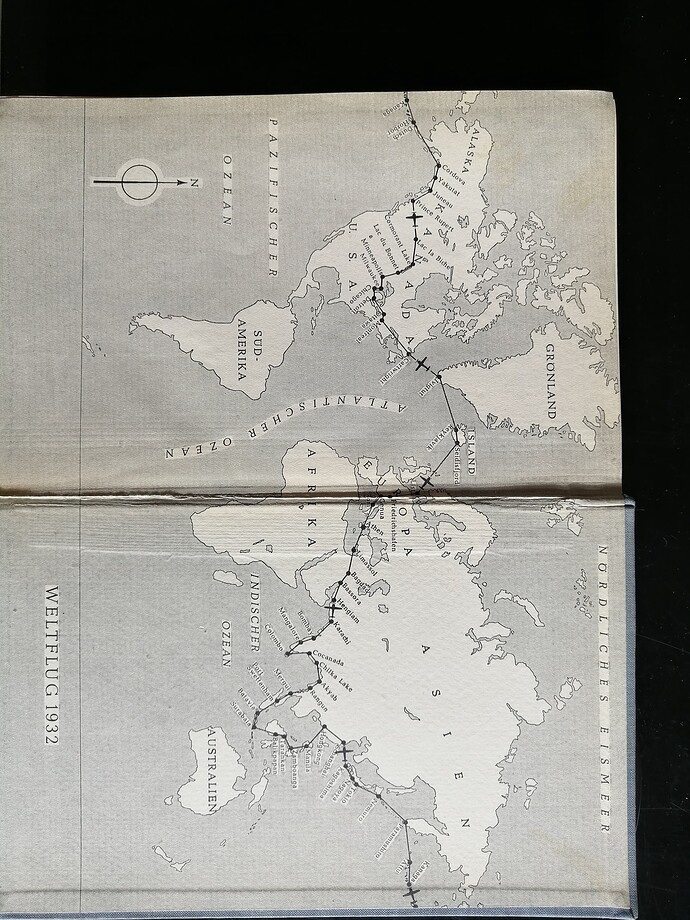 Luckily he was one of the first to have a long range radio: 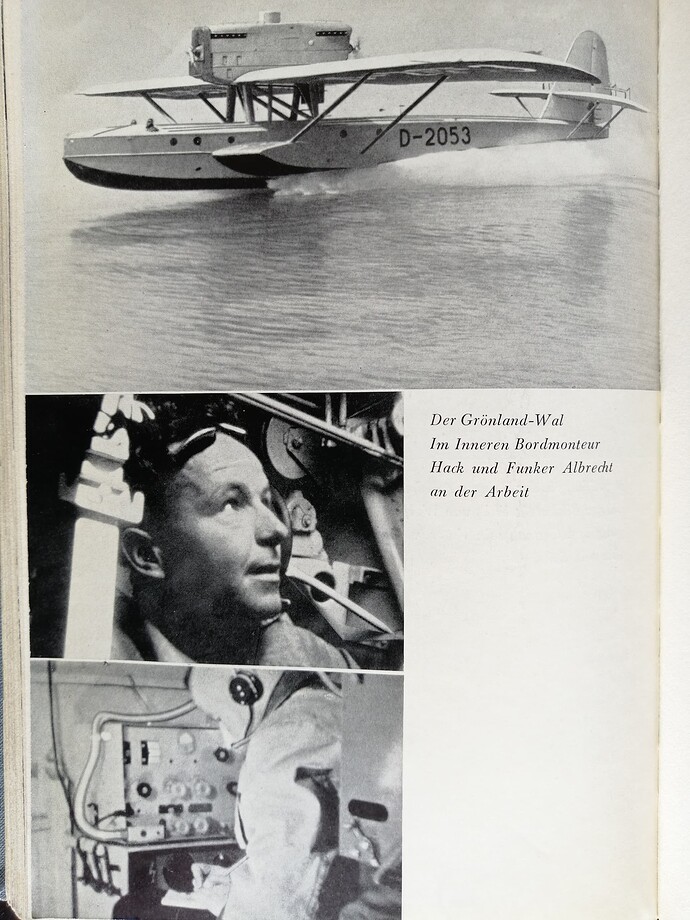 In line with the current expansion Local Legend III: Dornier DO J Wal, this book provides profound historical background knowledge about this aircraft, its worldwide tradition and outlook into the future. It seems to me the most comprehensive book on the DO J Wal and its history. 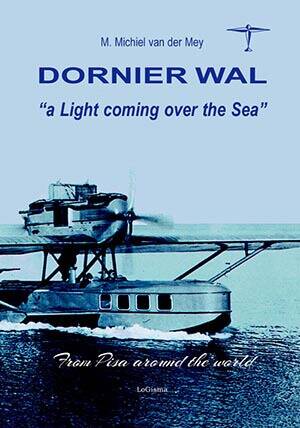 Thanks for creating this topic. Aviation Pioneers of the 1920/30s

The Many Lives of Beryl Markham

“A life has to move or it stagnates. Even this life, I think. Every tomorrow ought not to resemble every yesterday.” – Beryl Markham ...

With her biplanes (Avian, Moths etc.) she flew in the 1930s all over East-Africa as a Taxi-, Mail-, Medevac-, Delivery-Service. Finally she crossed the Atlantic East-West solo with a Vega.
I will post some of her flights from her book “West with the Night” over time.

She invented animal spotting by air - dropping detailed Big Game sighting reports in small pouches on hunting groups or landing in the open close to their Safari tents.
There is a whole range of possibilities for Devs - a great first East Africa free pack is this - which you actually need for this flight:

✓ WE HAVE HIPPOS 2 - The Malawi Project (One Installer, 40 Airstrips, 40 Animal POIs and more...) is a Microsoft Flight Simulator 2020 mod created by darshonaut. Download for free to enhance your experience in MSFS 2020.

BM shuttled between Nairobi and London in those kites six times (via Sudan, Egypt, Med) - always haggling with (and sometimes forced to detours deep into the desert) paranoid Italian military paper-shufflers, the country controlled much of the Sahara at the time:
SAHARA ORIENTAL: east to west - Fly Together / World Discovery - Microsoft Flight Simulator Forums