What is the deal with Terrain Level of Detail (TLOD)?

since releaese of msfs there is this one thing I cant get my head around to understand. When msfs released, I had a pretty decent system with i9900kf and 2070super, however, with the use of many many 3rd-party add-ons and mods it was inevitable for me to further upgrade my system. my current system now is a 13900kf 3070ti 32gb 3600mhz. I use 2 equal monitors in 1080p 60hz so I was always prettymuch cpu-bound and still am, although I get very stable smooth performance now in most cases. I have pretty much every setting set to ultra, the only setting I did not touch since the first days and left at value of 100 is Terrain Level of Detail. As soon as I crank up the value to lets say 150, I get mainthread limited as hell and my frames drop to under 30 with bad stuttering especially when panning the camera. As I dont see any big advantages in 1080p I just leave TLOD at 100 and never cared. As I have a pretty strong CPU I wonder what kind of machine it would take to be able to set 200 or 400 TLOD. I also have seen posts from simmers with lower specs than my system, claiming to have TLOD set to 200 or even 400. Please let me know, what is your TLOD-setting? What is your cpu/gpu? Is this somehow resolution-related, lets say you can crank it up to 400 if you leave everything else on low? Or maybe this is relevant for VR? How are people able to have playable performance with TLOD set to more than 100?

I leave mine at 100 with my i7 11Gen and 3080Ti. The LOD distance determines how many LODs the sim has to spawn and track. You can see this in dev mode under Debug LODs. Sure, you may be able to run LOD 200 in a small, generic airfield with no mods loaded, but as soon as you try a busy place like London with custom scenery and a fancy airliner, you hit the LOD wall. Leave it at 100, and forget about it.

The LOD distance determines how many LODs the sim has to spawn and track.

I’m trying to understand this. Is LOD a distance or does it stand for a number of objects or the Level of detail of the objects?

I’m trying to understand this. Is LOD a distance or does it stand for a number of objects or the Level of detail of the objects?

There was once a scale published that translated LOD setting to distance in km where things were rendered.

I don’t remember where I saw that, or if it’s even valid anymore after so many updates where things are tweaked behind the scenes without documentation.

TLOD is a CPU limiter, as is OLOD, so there are two scenarios where your CPU gets limited

So to get back to your original ? TLOD can be increased if you are not CPU limited. If you have a good GPU then load it more to stay out of CPU limited situations and this may allow higher LOD’s.

Having said that, the max TLOD I use is 200 on a 5950 with 3090 GPU while locking my FPS at 30FPS/60Hz (VSYNC). Works well for me usually. I don’t believe the people with TLOD of 400 have great performance, they must be flying GA only with no AI traffic or weather. Or just tolerate CPU limited stuttering. The TLOD slider could actually be renamed to ‘CPU mainthread limiter’ and ‘400’ could be labelled ‘max’.

Interestingly if you run out to buy a RTX40x series card, there is probably just as big a chance of staying CPU limited (with stutters) with this sim, unless of course you load/balance it correctly.

TLOD is the distance around you that the sim will spawn LODs. “LODs” are objects like runway lights and utility towers. It’s easy to see them. Just enable Dev Mode, and look in Debug LODs. Watch the LOD Instance count as you fly over the airfield. 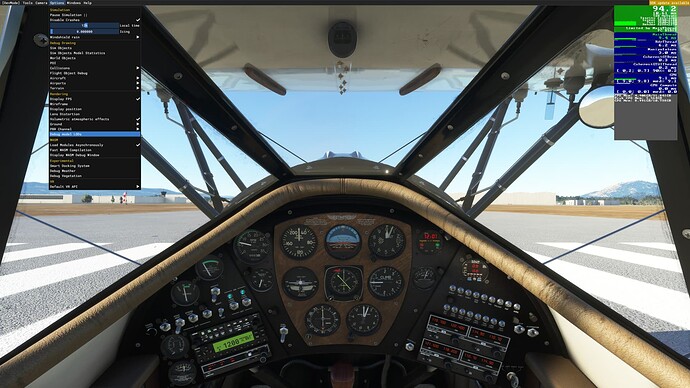 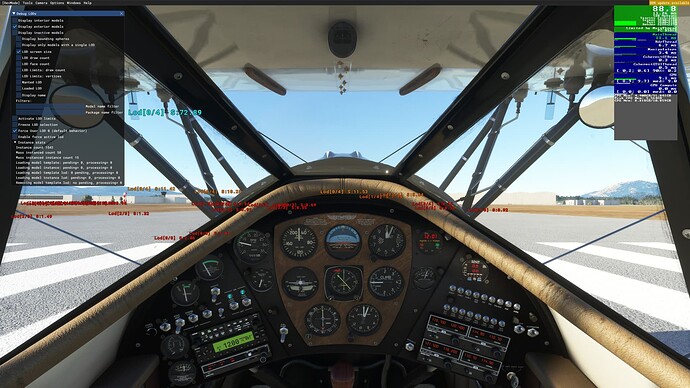 Terrain LOD is the most signficant to controlling performance. Assuming you dont have a 10 year old system, object LOD has minimal impact on performance at 200. You have to manually raise it to near 400-600 before performance is negatively impacted.

Thats true but I keep an eye on my OLOD round big hand crafted airports like Heathrow where the developer has thrown in an absolute ton of objects. My 5600X certainly struggles anyway. Beefier CPU’s no doubt just eat it all up though.

I searched through the forum about some other discussions about Terrain/Object level of detail and found an interesting quote:

Lower Object level of detail means less strain on the GPU, but more strain on the CPU. The game has to create lower level detail of the data streamed in to ease the render load for the GPU.

So it seems that lowering a slider (Object level of detail in this case) does not always result in higher performance.

lowering a slider (Object level of detail in this case) does not always result in higher performance.

Correct, and this becomes even less obvious for powerful systems. Most modern systems can keep object LOD at 200, otherwise you will force lower LOD resolutions to render.

Color me stupid. I’ve gone through this whole thread and it’s not clear to me the difference between Terrain and Object. What does Terrain LOD actually change and what does Object LOD change? I understand there’s “more” at higher settings, but what is there actually more of?

Objects lod is how far from your point of view objects like aircraft, airport vehincles,gates etc are rendered.the higher the OLOD the more objects you will see in the distance. TLOD not sure though…

Having spent countless hours fiddling with the graphics settings in the sim the only thing that makes any difference to my framerate is TLOD. I just leave it on 50 now as I prefer a nice high framerate over seeing trees render in 3 miles away

You have got your answer pretty thoroughly covered in here.

TLDR: TLOD and OLOD work outward in a circle around you. The higher the number, the greater the distance from you the circle reaches outward.

Because it is circular, larger numbers are EXPONENTIALLY more taxing on your CPU.

200 used to be as high as it could go. They changed it to 400 but even the best CPUs can struggle to give smooth framerates at that setting. 200ish is the best most folks can expect with modern hardware.

A GPU usually handles graphics but in MSFS, the LOD taxes CPU and you need to get a good 30 FPS for good gameplay.

Want smooth gameplay? While you can get 60 FPS on some systems, you really have to lower detail quite a bit to get that smooth. For best results, lock at 30 FPS. Adjust TLOD until you get a smooth 30 FPS in Developer Mode at a big airport near a photogrammetry city in a complex airplane. That is as taxing as MSFS gets. If you can get a solid 30 FPS in that scenario, you will get 30 FPS in ALL other scenarios without stutter.

LOD and its impact on the CPU is what prevents MSFS from higher framerates on most systems.

Is it better to be rather gpu limited than cpu limited?

It is stated on these topics that it is best to be equal.
As in, set your options to make their response times match.

I am just testing… Raised my render scaling to 110 and initial feelings are good… More fluid. And the dev mode says that I´m more gpu limited with this setting. My native resolution is 2560x1440, cpu is Ryzen 7 3700x and gpu is GeForce RTX 2060 Super.

Is it better to be rather gpu limited than cpu limited?

In MSFS, for best results, the goal is to adjust your settings so you can be GPU limited, or to cap frames at 30 and have overhead for both CPU and GPU.