What is the recommended bandwidth for data streaming for MSFS

Please could somebody advise what is the ideal badwith I should be getting in order for the sim to stream data without the Bing maps and photogrametry turning off? #PC Downloaded MSFS from Microsoft Store.

See this page and the specific Question below:

Q: What computer specs do I need to run the sim smoothly?

Platform and Retail Questions Q: What platforms is Microsoft Flight Simulator available on?A: Our PC version was released on August 18, 2020. It is available on PC Windows 10 via the Microsoft Stor...

Bandwidth is a complicated issue, depending on where you are on the planet your performance may vary.

Currently we have large groups and nations attempting to brute force and even DOS attack other nations along with normal activities so there are going to be some glitches sending and receiving information.

Ok thanks so here is my specs bellow, and if I read the chart you have provided then a band width of 50 Mbps should be enough to stream data correct? I have done a speed test on my system and I am getting Download speed of 90.94 Mbps and upload speed of 84.21 Mbps with a ping rate of 4. See attached photo. This is relativly constant. Yet I keep having Bing Maps and or both Photogrammetry turned off. I have nothing in the community folder. This issue started after the last 2 updates from MSFS. I have all my Nvidia and Windows updates up to date as well.

This is exactly what I was referring to in my previous post, this is your speed/bandwidth from you to that server in Johannesburg not between you and the content.

For instance here is my test to my local best server.

Looks great right, now here’s my connection to a part of the world I’m shocked there’s still a server returning pings in Kyiv

Not so good. I’m lucky enough to be on the East coast US so I generally get a great connection except during extreme issue.

Thank you so then the issue is not on my end as I thought it must be from MSFS side were I am gertting the data from. This has confirmed my suspissions all along.

Or more likely, somewhere between you both.

Question now is how do we solve it

Tough to troubleshoot I’m afraid. Folks have found all sorts of workarounds, including having to use VPN clients, etc. I’m not part of the Support or Dev Team, all I know is that like many Software as a Service environments, QoS is heavily reliant upon what sits between the user and the servers. A speedtest gives one a general sense of the connection they have to the server conducting the test, but not necessarily a specific node or even landing page/load balancer for a specific application.

Ah ok thanks for your input and advice much appreciated, Here is a snapshot of the MSFS servers from my MSFS, here you can see there is an issue on MSFS side. Just to make it clear I downloaded MSFS from the Microsoft store and not Steam. I have also added a screenshot of my net speed test. We need more servers or improved servers with higher speeds. When will South Africa be allocated a server? 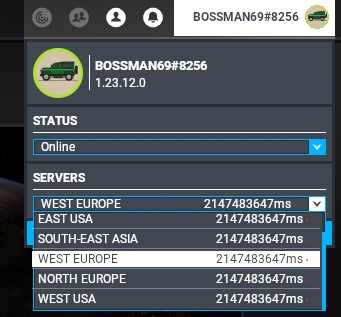 When will South Africa be allocated a server?

isnt in “Johannesburg” not direct a data-center where you live ?

What we see in your image is only a bad connection, but not Who cause that. It can still be your provider ( can ). But yes, not all countries in the world have the same amount of servers / infrastructure.

I don’t understand what you trying to say here, if you look at the screen

Screenshot 2022-03-11 1759291484×427 46.9 KB
shot I provided were I tested the input and out put of my internet connection you will see I have no issue there, 100 up 100 down package and I am well in range of the 50Mbs recomended by MSFS for data streaming. I have had the same server with the same package and no change now since the sim came out and I have had no issues up until the last 2 updates from MSFS, surely the issue has to be on MSFS side, look at the slow bandwith from the MSFS server.

It took me 2 weeks to do a fresh install of the sim from the MSFS store page. The Devs admited in their last Q & A session that there is a problem with slow downloads from the store page, I am saying it goes futher than that the server they use is either too slow or too small to handle the loads.

That goes for all of the servers that MSFS is using, that is why some mjultiplayers are struggling also with intermittent name tags dropping in and out as well. MSFS need to investigate their server output issue.

If the problem was on my end then surly it would affect all of my other games that are just as demanding of net resorses and live streaming as well which is does not.

There are Xbox uses also complaining of the same issue so I am not alone on this.

many providers limit the traffic to specific internet services , as example youtube or also the azure services, because the provider itself have limited resources and will give all its consumers allways enough bandwith for useless speed-tests and that consumers can open a website with 1gig speed.
Therefore you have may be seen very often the hint " try to use a VPN" to possible narrow down where the issue comes from.

Sometime there are also other issues, like dns timings, etc…

And I just answered your question:

When will South Africa be allocated a server?

Your main topic question: What is the recommended bandwidth for data streaming for MSFS

TunnelBear: Speed
TunnelBear had a lot to complain about during the 24-hour speed test in the COMPUTER-BILD test laboratory. In this stress test, we continuously measured the download and upload speeds as well as the response times of the server (ping).
The download speed, which is particularly relevant for everyday surfing, slowed down by 6.5 percent compared to the measurement without VPN. Although this is a satisfactory value, it could lead to noticeable delays with larger downloads. The upload speed, on the other hand, is very bad. With TunnelBear, web uploads slowed by a whopping 32.9 percent. This should significantly slow down data-intensive applications such as video telephony. The server’s response times, on the other hand, were pleasantly short at 16 milliseconds.

You may see, its not so clear as you might think

Well honestly I give up then…