What is your favourite rout to fly?

What is your favourite route that you fly often in the sim and what aircraft do you use? My fav route is CYYZ-KJFK or KJFK-CYYZ on AirCanada 777-300er.

Fun question. Any route myself or my family flies, I either mirror it in real time if I can or within a few days after. For personal favorites for nostalgia, SMF-LAS. Something long haulish ends up somewhere in DEN or MDW most of the time. If I want to fly but will be busy then I did a few runs to and from Hawaii from the West Coast. FYI, I mirror my ops specifically from SWA. I remember a number of years back there would be this one pilot in our VA (Virtual Airline) who would fly MDW-SDF and back daily. He must’ve really like MDW or SDF for some reason. My home airport IRL being SMF, that is the most common airport for me. Just depends on my mood and also since I only fly real time, the availability of schedules. For instance, West Coast is now 20:30, I would not be doing a flight on the East Coast. I also fly where my end point is my next departure so that plays a factor, too.

Can you tell what my base is. :). Looking forward to the YYJ release hopefully soon…

Over the Channel back and forth between EU and UK

Over the Channel back and forth between EU and UK

Hey lol, whenever i feel airlinery, that’s usually what i do, either from EHAM or EHRD to EGLC, EGGD, EGHI (that one i actually flew in real life as passenger, loved the right-hand-circular approach over the oil drums and harbour then over the bay and bumpy as you hit the shore/city on final) or EGCC in the pmdg 737, dc-6, or Just flight BAE 146 (the mini jumbo).

Once did the family thing, where my sis was going to see her friend in Philadelphia, took a 747 up from Eham all the way to final for Philadelphia International, then my game crashed… think it was fs2004… never ever did a long **** flight ever again

Because of staying overnight in Newburgh NY, i kinda like to start from KSWF (New York Stewart International) and fly my way towards the big apple or DC alot too.

For the rest, i kinda fell in love with the state of Utah, so i hang around there quite alot, but in smaller airplanes, not particularly doing routes, but just enjoying the countryside up close(r).

One of my “comfort routes” for GA planes is from Portland, Oregon (usually from KHIO or 7S3) up through the Columbia River Gorge, past Mount Hood, and out to The Dalles (KDLS).

It’s a fairly quick hop, easy to make in one sitting on a break from the day, but I enjoy the scenery.

Fun route for a C152 or the Flight Design CTSL without any fancy autopilot! Or those old biplanes and warbirds…

John Wayne (KSNA) to Big Bear (L35) is another favorite GA route of mine, from a big-city crowded airport to a mountain resort town.

In both cases doing it “correctly” requires keeping an eye on airspaces to stay out of the way of airliners, and that’s part of the fun for me. 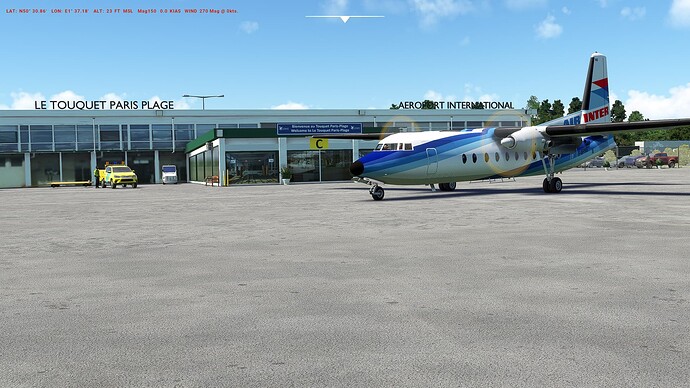 I like hopping between these (in various random sequences)

I’m desperately wanting for some 3rd party developer to do a proper KMCO.

The current default KMCO is pretty bad for being one of the handcrafted airports.

Low and slow in the XCub, Queenstown to Milford Haven in New Zealand. Various routes through the valleys, land on a beach if you want - or anywhere there’s a flat space really.

How’d you manage to get the old school red line of data, still shift+Z?

I summer, I base myself from my home airport of CYGK and fly small GA all over eastern to southern Ontario. Typical destinations will be CYOO, CYKZ, CNC3, and CYRO. I’ll also take some slightly longer flights into Quebec, particularly the east cost area. And of course, I like to explore other areas as well. I’ll fly to one of those airports and base myself out of there to fly in those regions. I don’t have any typical routes there. I just hop around and explore.

In winter, I follow the lead of a lot of elderly Canadians and head south to Florida. I base myself in KOPF and fly multiple routes around Florida, the Keys, and Bahamas. And I have the occasional hop into neighbouring states. I tend to use slightly larger planes for that (TBM, Vision Jet, C414) which take me a bit farther and on more regular routes.

I do also enjoy hopping around SoCal in winter months. I tend to base myself out of KMYF and bounce around all over SoCal. No regular routes per se. I just pick a destination, create a flight plan, and go.

Isle of Man round trip. Andreas glider airfield (far north) around the Calf of Man (far south) following the coast as much as possible in whatever live weather is going - FES not allowed.

For nostalgia: TNCC-TFFR (SLH Design, probably the best designed airport in my collection)
For testing: EHAM-EGLL or EGKK (2 heavy sceneries with a stretch of water in-between)
For beauty outside the window: Any flight at full moon over the Sahara, with default plane and max. visual settings.

You should get out more.

There really isn’t enough hours in the day to do all the flying I want to do, plus live life as a regular human being. LOLOL

With the “Real Life” Realistic Live Weather switch on here in the UK, it’s usually raining

Haven’t found how to turn that off sadly.

I live in S.E. Asia (Philippines) and frequently travel around the region.

I like short airliner routes as it keeps up the pressure and you get in lots of takeoffs and landings. These are some of my fav routes that using real world data from FlightAware.

F27 is a legend plane, thats a nice shot. I need to get that plane!

My favorite route to fly is from KSDL (Scottesdale, Arizona) to KLGB (Long Beach, California), In the Beechcraft Bonanza G36. I don’t know, but for some reason I can just imagine heading to Long Beach for some Summer fun.