Tried it once ages ago but it randomly fell out the sky. Been flying the Dreamliner ever since when I need a heavy fix!

How does the 747 compare to that now? Any recommended mods for it? 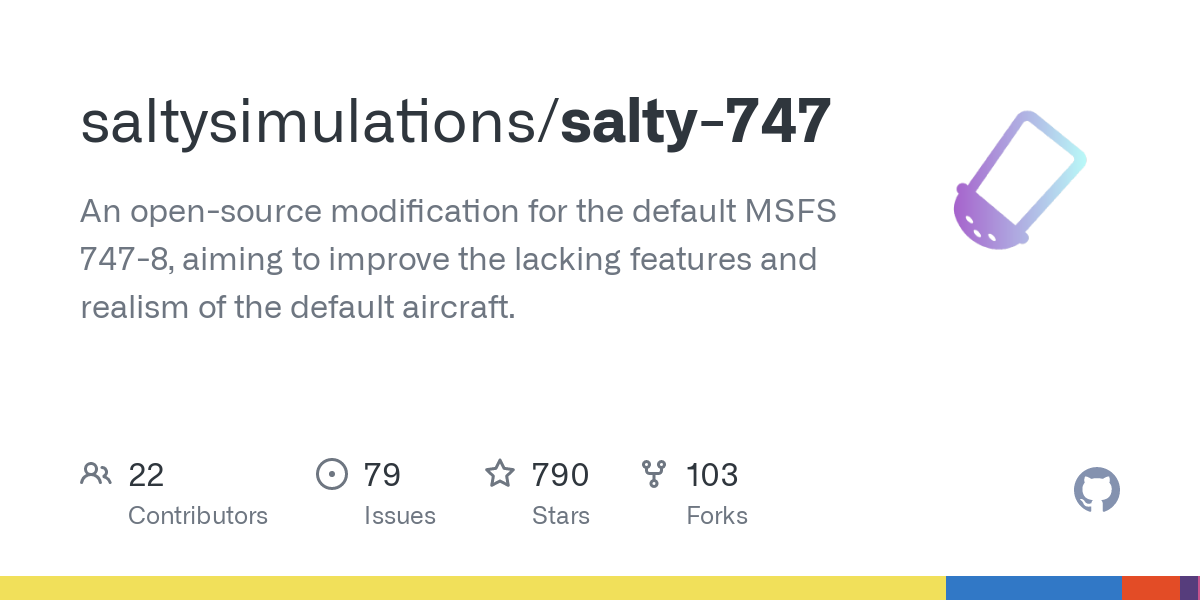 GitHub - saltysimulations/salty-747: An open-source modification for the...

It flies about the same as the dreamliner now.
It’s reasonable.
The Salty mod mentioned above is very good.

747 787 fly really good stock. It is good enough to TO Cruize Approach and Land and all the while enjoying the stunning weather and eye candy. The FMC works good stock. Give newcomers a chance to figure it out. I know some simmers are experts. However, It is not easy to TO approach and land . It is challenging to say the least. But after a while you get the hang of it and its really really fun. You get to learn how the airliners navigate. Heck the learning is fun. Salty mod id good.

There are still odd behaviors with the FMC in the stock, un-modded aircraft.

I’m flying it right now and as I was reading this thread the IAS bug just changed to 242 and the aircraft slowed itself, even though the LEGS in the FMC show the next 5 visible as 310 / FL320.

Yesterday I had some very strange behaviors in the autopilot where the aircraft would crank the yoke to a fully locked right turn state and be in the midst of barrel rolling the aircraft until I re-took control of it.

These sort of things are a bit confusing, still.

I dunno if it has improved since launch or when your last reference point for it was. I’ve been flying this sim since September ‘21 and I’m not sure I’ve seen any changes to the 747 in that time.

Like a potato, yeah the mod has improved the plane A LOT, but it is still waaaay to far from the real thing to be enjoyable for me.
I will have to wait for PMDG’s.

As an example, the aircraft refuses to slow down at idle thrust with a standard 3:1 descent - the only resolution is to apply a very unrealistic amount of spoiler.

The Salty mod only improves avionics/systems.

The Salty mod only improves avionics/systems

I would not say that, not in the least.
Have they got it to PMDG Queen of the Skies level?
Of course not, the base model is still a default aircraft.
As far as default aircraft go, it is actually “fairly” good.

Here’s a list of a lot of the improvements.

An open-source modification for the default MSFS 747-8, aiming to improve the lacking features and realism of the default aircraft. - saltysimulations/salty-747

Does that yoke issue happen often?

I have had the odd thing with the 747 FMC, nothing too serious, but in all fairness I only fly it a few times a month.
Other than that, I’ve found it quite reasonable.
I wonder if it’s an xbox thing.
Did you ever try to reinstall it?

It’s done the strange behavior on both my Xbox and PC.

There are a few threads here that talk about issues with the 747 autopilot, specifically.

It’s one of those things we workaround!