Hello!
I have created a custom livery for me and my brother however we are having an issue with a white box showing over the top of a Registration plate?
The liveries have the Aircraft Reg pre-painted onto the aircraft (static)

This is my Aircraft Config (using one flightsim.0)

Do I need to make an AI version & a User one?
We have a custom Matchmaking rule set for VPilot so can change that easily? 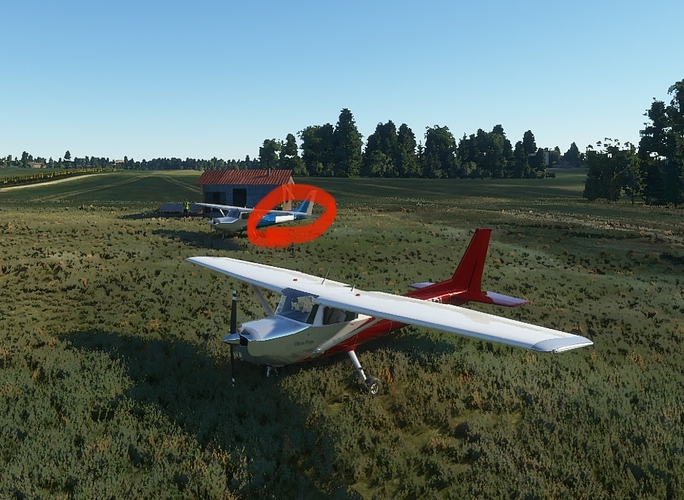 In the Aircraft.CFG file, have you tried putting in the atc_id and atc_id_enable to 1?

Hello!
No I had them set to 0 as I thought AI Traffic needed that for some reason!
I will give it a shot!

The white decal appears when I make community mod liveries available for AI. If my Community folder is empty, there’s no white decal visible on AI parked aircraft. I’ve been wondering how to fix this.

No - I’m still struggling with this issue! I’ll put a ticket to Asobo!

I should point out, when my community folder is empty, and the ai parked and active aircraft don’t have white decal backgrounds, they still don’t have Registration numbers, even though they should.

I’m having this exact same issue. Any leads?

Not yet sorry!
Still battling this gremlin!

Interesting. How are we the only 2 people with this issue lol? Did Asobo have any clue?

We have more than 2 people having this issue. Myself included, but I’ve already live with it. It doesn’t always occur. I had to check and recheck all my AI traffic livery to have blank tail number and enable tail number to 0.

It’s usually appear with the white box if the AI traffic has the same livery that I’m using. But everything else doesn’t have it.

So I end up already ignoring it if I see it.

Previously, I have found that if you replace the custom livery PANEL.CFG with the one from the default aircraft it will eliminate this issue. the reason is your livery CFG files are not updated when the sim and all its default aircraft are updated by Asobo. You can try that, HOWEVER, with the most recent update, I have been having trouble getting this workaround to work on some aircraft.

I have this issue as well and can’t figure out why it happens.

I think it’s because the sim doesn’t render the tail registration number of other aircraft other than our own. Since the registration number is rendered as a transparent decal, it also only works for your own aircraft. It may be to improve FPS performance that other aircraft model is using a lower level of detail, which can make this transparent tail number to lose its transparency to limit the GPU from rendering them unecessarily.

I’m trying to assign a specific panel mod into each of my liveries which will entirely stop the tail number from rendering, hopefully there would be no more black/white boxes on the tail number since the tail number decal is not rendered in the first place. But I’ve yet to test it. This is of course is to just make my livery collection for their creators who hard-painted the livery from doubling up in the texture.

If “we” can determine how the frost is turned “on” and “off”, perhaps “we” can find a setting in a config file that will eliminate the registration box for any particular livery. I repaint aircraft and the correct registration numbers size, location, color, shape is important to me and they are included on all of my repaints.

I can successfully eliminate “decals” and liveries by creating a blank texture file for that decal / livery but I have not been able to determine how MSFS uses the registration “area” in order to eliminate it entirely. (I DO know how to remove the default registration numbers. The purpose of this post is to eliminate the white box itself!). I group fly with other members of my flight sim group and it’s disappointing to see white boxes on everyone else’s aircraft.

Any (constructive) input would be appreciated!

But those white box are the registration number “layer” that sits on top of the base livery texture underneath. It’s the same layer as it always is on all aircrafts, including your currently flyable one.

I think the difference is due to how the sim renders the Air Traffic models. For your own aircraft, the layer is set to have transparency with the tail number text to show whatever it is that you set. If you set it to be invisible, then it just appear as a transparent layer, not showing anything so it only displays the paint underneath.

For AI Traffic though, to save FPS, the sim has to render the AI traffic as a lower-quality model. Even if it’s using the default A320 model for example. It’s still not a “flyable” high quality model. But a lower quality model used for Air Traffic instead. So it needs to reduce some aspects that impacts performance. In this case, the tail number layer that is suppose to be a transparent layer, loses its transparency, making it an opaque layer. That’s why it’s showing as a white/black box.

What I did for my air traffic is that by using Generic A320 Traffic » Microsoft Flight Simulator mod, I set it in such a way that the tail registration number is disabled on the aircraft.cfg file for the generic A320 traffic.

Additionally, I also set all my liveries AI traffic to have the tail number disabled in their aircraft.cfg as well. This will remove the layer entirely from the ground aircraft and moving traffic. While it doesn’t have any tail registration at all, at least it’s not rendering the white box layer.

See how it looks in my airports for ground aircrafts and moving traffic, notice that none of them have any white/black box layer being rendered. 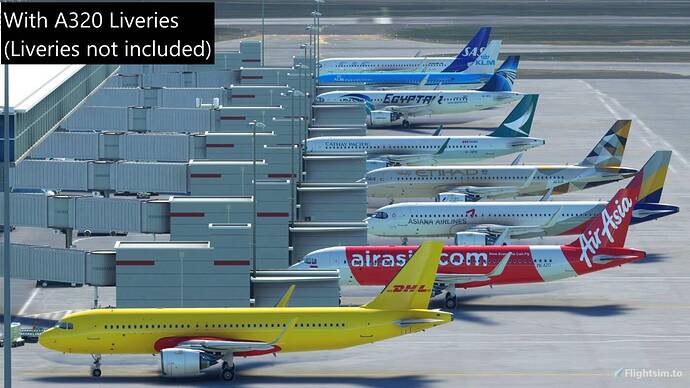 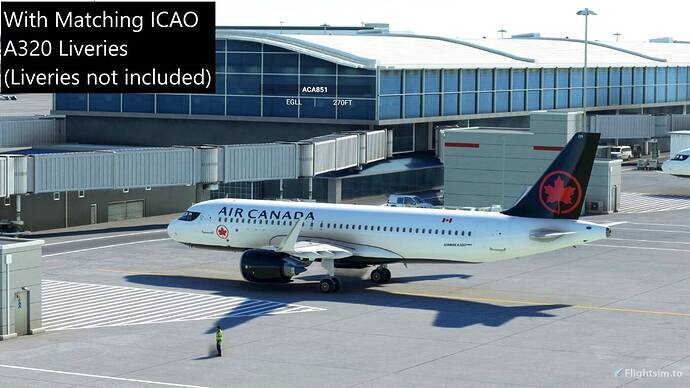 Thanks for the reply, and I agree with the “layer” on all aircraft, (which did not exist on sims prior to MSFS), and I do understand “their” intention, but it’s a nuisance when you want to provide correct registration labeling on aircraft. (wonder if it’s an XBox thing??)

Your resolution above is probably ok for the A320, but I group fly with my sim club and we fly a variety of GA aircraft. I’ve been making unique textures for the C172, XCub, etc. for each individual. Modify the aircraft.cfg file to eliminate the “forced” registration number by MSFS, and it looks good, to “yourself”. But group fly, and all of “their” aircraft have the white box on them.

You’re probably correct about the transparency, (sounds logical), but if I can find WHERE they generate the white box (in the textures), I believe it can be successfully removed. I know how to use Blender and determine the location of items using the UA map, but have not successfully found this one yet. (I’m sure I said that all wrong)

On individual aircraft, I can force there to be a blank where the registration number is, (mandatory if you have the registration textured into the model), and the aircraft looks great! You can see on the image below where I’ve eliminated “their” livery and the decal on the tail (even though they are part of the model itself). 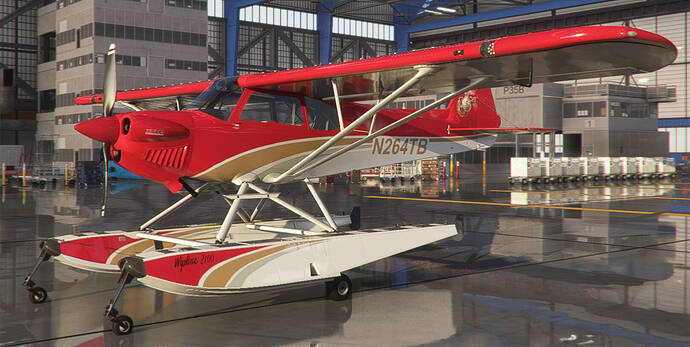 would you mind telling me what you’ve changed I the aircraft.cfg to hide the registration? I’d really like to try this for some liveries as the white box is a real immersion killer for me.

I think I just set it to this:

Great, thanks! I’ll try it next time I fly.

The approach I took for liveries I created was, in aircraft.cfg I put my registration number (example) atc_id = “N264TB” I left “atc_id_enable = 1”

Then in MSFS, when you go to World Map to launch a flight. Select an aircraft and a livery, then go to “customization” On “Tail Number” make sure your cursor is in the box and hit “ALT 255” on the nuimber pad. This will create a “null” character in that box and will virtually create an empty box. This tends to hide the white “box” we’re cursed with.