Why is photogrammetry more demanding that autogen?

As the title says, why does photogrammetry run slower than the autogenerated landscapes?

It makes no sense to me as Google Earth VR is butter smooth, and did so even on my old computer way back in 2017, it was like the photogrammetry has no impact on framerate.

Yet the photogrammetry is choppy in the sim? What’s weirder is that on flightsim.to I’ve downloaded mods that add photogrammetry from Google Earth into the sim, for example the city of Exeter. It looks great, but is unplayably choppy even with my 3090, whereas the same scenery in Google Earth VR is butter smooth?

Intuition and common sense make me think the computer having to precess autogen scenery would be a lot more demanding than merely displaying preformed photogrammetry, but in practice, the opposite seems true.

It’s because photogrammetry is streamed in via the cloud, not on your local machine.

But it’s streamed off the cloud on Google Earth too and it’s not choppy at all. Plus you can enlarge your rolling cache to download it but that still doesn’t fix it.

And the city of Exeter was on my local machine, installed from Flightsim.to

Because google earth doesn’t simulate flight dynamics wind movements, weather, AI traffic, etc.
Autogen is just picking a random building object form a existing library of building shape and randomly place it on the map. It doesn’t take into account the actual shape of the building so they don’t need to draw each building from scratch.

Yea I am sure it is using a lot wider variety of textures too. Most of the auto-generated buildings have a much smaller library of textures that it has to pull from to generate it so they should load quicker with less ram needed to store it.

The sim has to simulate weather, AI traffic etc all the time, not just for photogrammetry scenes though, and it doesn’t have to worry about rendering anything more in the photogrammetry either, it’s already been rendered.

In the case of Exeter city its installed and exists on my computer so it’s not streaming it, rendering it or anything. You can the run the exact same scenery in Google Earth on a 1060 without issues.

The flight dynamics etc obviously have an impact but the sim is calculating that in all scenery conditions and the autogen is totally smooth.

It’s installed on my machine, I’ve got a Firecuda NVme drive i can’t see it being a loading issue.

Yea idk I wish I had a solid answer on why. That’s the million dollar question. Everyone can speculate but for some reason there are more issues getting PG data loaded in whether it be the textures or polys… I’ve seen this even is areas where you do a manual cache. Still has the same issues whether its hosted on a remote server or saved locally.

I think the answer has already been given by @Vibstronium above.
Loads more polygons (autogen buildings are much simpler), loads of textures (nothing is repeated, every pixel on every building is unique). It’s not more complicated than that.

Reason google earth is smooth is that is doesn’t have any other loads running (dynamic lighting (day/night/cloud shadows), weather, flight model etc etc etc). Basically everything that makes google earth just a planet watcher, and MSFS a flight sim.

Also important to note that OP didn’t mention anything about processor. Even with the 3090 it’s not going to do much better than any other cards without a top of the line CPU and even then it’s still going to struggle. MSFS has been made needing CPUs that will be released 2 or 3 years down the road to really be able to handle all the processes needed to handle the sim without breaking a sweat.

The sim is doing a lot more work with PG data. It’s constantly adjusting the LOD. PG data comes in 3 detail levels from the server, and the game further refines / simplifies it to help performance. However since the sim is mostly CPU bound, it actually hinders performance.

PG data is also far more polygons than autogen scenery, which also all shares the same textures and simple shapes (with premade LOD versions) PG data is all unique textures with unrefined shapes that need to be processed on the fly. 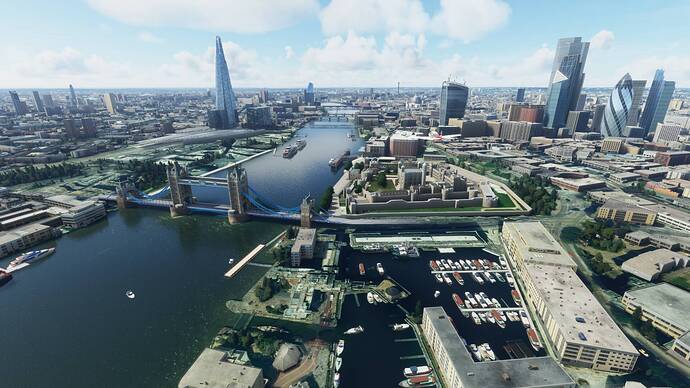 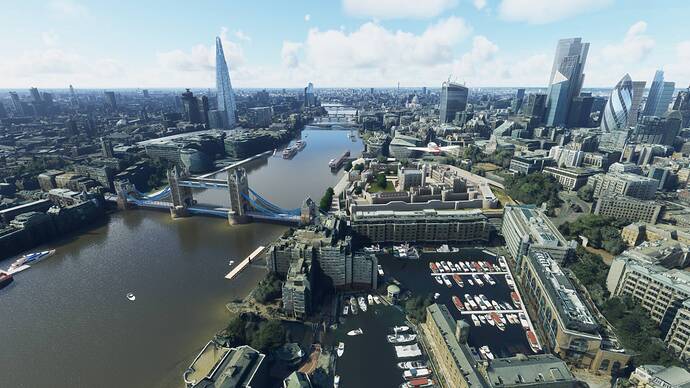 Google Earth probably loads everything in memory and leaves it as is, one detail level. It’s not made to fly all over the world.

That’s the million dollar question. Everyone can speculate but for some reason there are more issues getting PG data loaded in whether it be the textures or polys

That I can agree on. Flying into KBOS is a guaranteed stutterfest and around 5 FPS.

But it’s streamed off the cloud on Google Earth too and it’s not choppy at all.

Perhaps, but then Google Earth isn’t also running a flight sim in the background.

I do think its a CPU issue rather than a GPU one though. Lowering resolution makes very little difference to my frame rates. I only play in VR and I set my Quest 2 resolution 5408 x 2736 which is the Quest’s maximum render resolution in the Oculus app. Lowering that resolution doesn’t improve performance suggesting the CPU is the bottleneck

That’s interesting what you say about LOD. I keep mine at 100 but I notice in VR that lowering my resolution doesn’t really improve performance. I wonder if I could increase object and terrain LOD’s beyond 100 without hitting my framerate? I’ve got a 3090 but only play in VR which is more demanding than monitor…

Yea that’s a pretty nice CPU can’t get much better than that other than probably Zen 3… Intel 11th Gen beats it by a hair, really not noticeable. I understand how it can be frustrating with top of the line equipment and can’t get smooth gameplay. I haven’t tried flying around KBOS for a while but since the last updates I’ve been having major issues around KATL. I’ll have to check out KBOS next chance I get and see if I have issues there too.

Edit: Do you have an overclock on the CPU? I’ve seen where people have had issues when doing that. Think it’s mostly issues with stability though not really just the general stutters.

It’s the other way around.

Object level of detail, higher is less work for CPU with PG data, more work with autogen, more work for GPU in general.

Resolution is just more work for GPU, you can set the render scale higher until you become GPU limited instead of CPU limited. Lower resolution just keeps you CPU limited.

Almost every smart phone can run PG with Google Earth. It’s not so demanding.