Why is there no support for VR controllers?

Vote for them on the wishlist, here

According to Asobo VR video just released, there is no support for VR controllers! Anyone that holds VR dear - please upvote this! Please, Asobo, if you are reading this, you have to realize that your user base expects MSFS VR to be at least on par with the other 2 leading sims that had VR available for 2 years. What has made X-Plane VR great is the fact that you can interact with all buttons, throttle lever, flight computer, GPS, fuel mix levers and everything with your hand, not with a mouse…

I would disagree completely on VR being a mess.
With my setup it is the best VR experience I have had to date.
So I wouldn’t make a blanket statement it is a mess.

Please vote for this issue in Wishlist section. I have created a topic there after the VR video was released showing no controller support.

Exactly. I have a dedicated separate setup like that (see my topic). There should be both. Some people want mouse - OK, there is no reason no to have both.

What’s ridiculous is people thinking VR controllers are great for interacting in a cockpit.
They’re fun for about 10 seconds, then you realise how inadequate they are as substitutes and it’s easier to just use a mouse (if you need to) and have fun flying.

Asoba made the right UX call for this release. Get over it.

Err… Did you actually try it properly? It’s amazing. Look at my video in X-Plane. It’s a joy to use VR controllers. And good luck writing down ATC instructions from VATSIM live ATC controllers with your mouse. Remember, everything is in VR, you can’t grab a pen and look at the notepad. 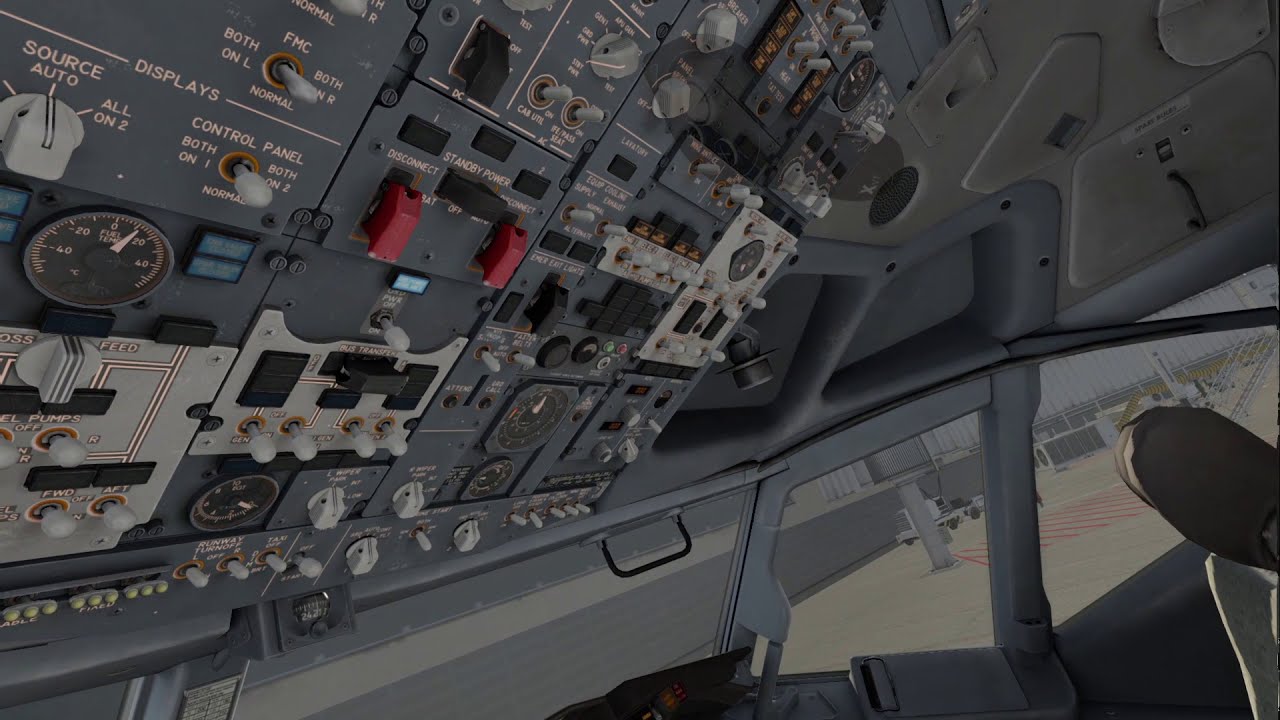 Coming from X-plane and DCS Vr, this is subpar in my book. I suggest trying xplanes for comparison.

I beg to differ. Try writing live ATC VATSIM instructions down with your mouse. And it’s just one example. VR Controllers are not haptic gloves, they are not ideal. But I assure you, if you calibrate and organize things correctly, VR controllers are vastly superior to mouse. And whatever one thinks about VR, controllers are an integral part of VR implementation. Without them - it’s only half VR. If you like mouse - keep using it, there it no reason not to have both. Ergonomics of cabin are built for hands, not mice. Mouse is a crutch, at least a larger crutch than controllers.

The lure of motion/touch controllers is simply the physical actions one must make to reach the buttons and dials while moving the head around in the cockpit. I find that mostly very immersive! But, the part that bugs me a little is the arcadey representation of the controller moving around like witchcraft in the plane. Or a pair of virtual hands that put me in the mind of Thing from the Addams Family. That sorta kills the immersion.

With the advent of WMR headsets I assume that someone company will develop a device that will allow us to use our real hands to manipulate the flight controls. When that happens, I’m all in.

Coming from X-plane and DCS Vr, this is subpar in my book. I suggest trying xplanes for comparison.

I have both you mention. For WMR right now I would say MSFS2020 has figured it out better than XP11. For example try jumping in and out of VR in XP, doesn’t work well. Here it is seamless. For longer flights it is implemented well.

VR controllers work okay for some, I have them but prefer Yoke, Throttle, Pedals & Mouse in this game.

Your posts are quite harsh on some people. I’m not a noob as you inferred to someone else. Support for VR controllers should be available if one wishes to use them.

So aggressive. So unnecessary…

There are already some solutions for hand tracking, that utilize either the headset integrated forward looking cameras (like in HTC Vive), or a separate device (Leap Motion). In my opinion, this will solve the cockpit interaction issue if implemented properly. I have the Leap Motion device, and I tried it in X-Plane with the Rift headset, but the implementation was rather poor a year or two ago. It watches your hands and tries to replicate your hand movements inside the virtual cockpit. (see the linked video) 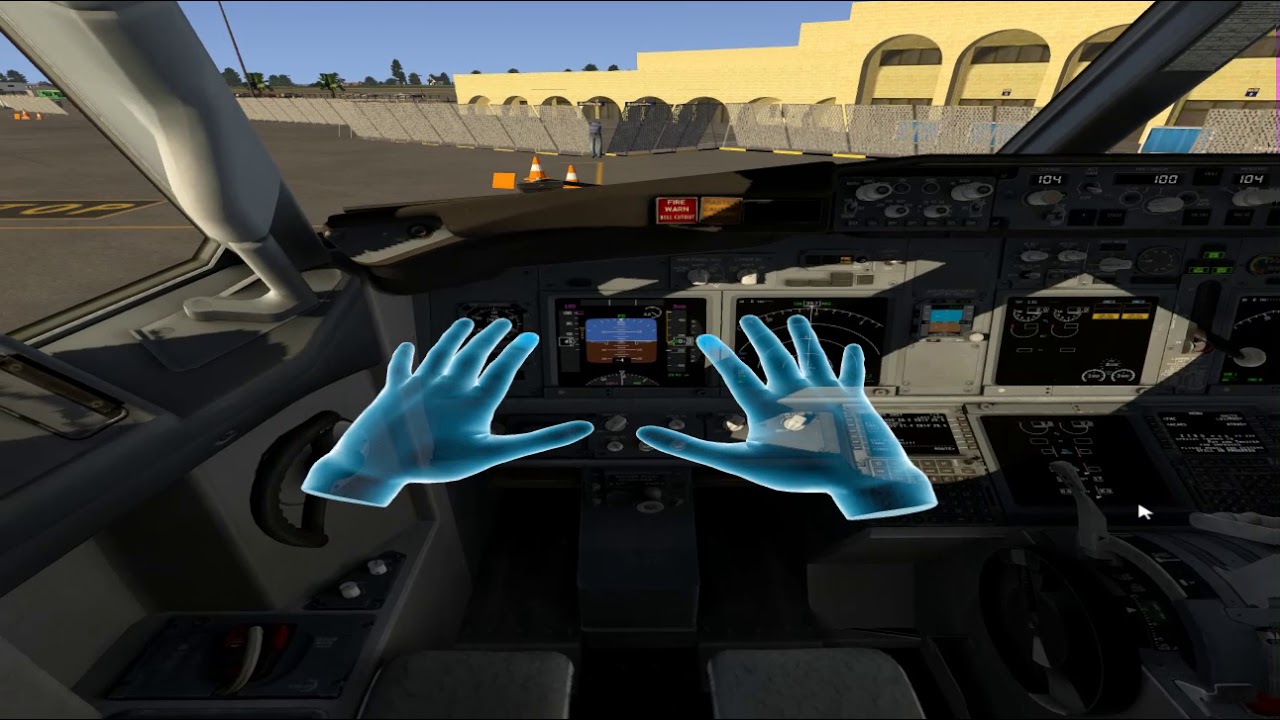 There are a couple of issues with it:

Both of these issues can be remedied quite well with better software. The first one is a problem because the software does not “remember” that you’ve extended your finger when it gets obscured by your hand, but retracts it into a fist again when it does not see your actual finger. The second issue can be made better by using some zoom button that brings the whole panel close to your face, which you can then manipulate without bumping into things. This is an immersion breaker, but it works. Another option would be to have a sort of a finger mounted laser pointer which you can activate on a press of a button. That laser pointer then acts as an extension to your finger and it is of course not blocked by physical objects.

There are also glove based solutions coming up which will hopefully be better than camera based ones.

Until we have one of these clever solutions at hand (no pun intended), I believe the mouse solution is the best compromise at the moment.

What’s unnecessary is pearl clutching over VR controllers not being available in the current implementation and calling it “half VR”. lol + facepalm.

The developers are highly experienced VR/AR/XR devs and fully aware of how people use them (or don’t use them as in my case and others) and no doubt didn’t include them in this release for very good reasons - most likely because it wasn’t robust enough yet. You’ll get it when it’s ready, there’s no need to be hysterical about it.

We’re also still in the early stages of VR interaction, and it’s not rocket science that the current VR controller implementations have a long way to go for certain use cases - as others here have also pointed out in detail.

I believe they are, yet, I’ve just tried the Holo Tour made by Asobo a few days ago, and let’s say using a controller is just a different mean to press a single “ENTER” key, but one which stays with you hand. Mind you, this is an old app already for VR and implementing a sound controller support in a flight simulator is not an easy task.

In my opinion the simulator doing it the best is XP11. Using controllers feels like a natural extension of your hand which you can use to flick, turn, push, pull etc… (especially with the Knuckles where finger motion fits naturally). I just thing XP11 knob turning in VR could get a little bit more refinement because sometimes it is too sensitive and other times not enough (meaning you have to turn a lot, which is like IRL but cumbersome with a controller instead of 2 fingers)

Well, I said they were experienced, that doesn’t necessarily mean they’re great UX designers as well

I don’t blame them at all for leaving it out in the current release, I’m sure it’s glitchy as hell at the moment and graceful degradation to using a mouse is perfectly fine till they figure it out.

As it always happens, you wanted to say something bad about me, but only made a statement about your own character… Don’t be aggressive, enjoy the simulator instead.

Hope the devs add this for you guys… But I for one can’t stand it… Only for the fact that I started playing Xplane 11 with using the motion controllers (only choice back than) and it was the most annoying thing on the planet… Holding an invisible stick, that had to feeling is just terrible… And not to mention that if you use a joystick and throttle and everything now, your most likely going to smash into something trying to turn a knob, or push a button.

But like said, I hope you guys get it. Should be included.

I agree. The problem with using the VR controllers is that if you are using flight stick and throttle controls you need to put down the VR controllers. This leads to them falling on the floor, or just some awkward motions when trying to flip a switch in the cockpit. DCS is very easy to use with it’s mouse integration, I never feel like im guessing where the mouse is or flailing around to try and grab it. I would venture to guess that FS2020 would be far better with hand tracking. With that there would be no fumbling, you just reach up and there are your hands going for a switch. But hand tracking has a way to go and im sure in the future this will be an option.

I would venture to guess that FS2020 would be far better with hand tracking.

They have added provision for supporting hand tracking in the WMR OXR v105 (preview) version. I doubt any G2 camera would work for this though. They could also use the Vive SDK with the Index in order to support hand tracking via the Index colour cameras, but it is not the best AI hand tracking implementation. Might be sufficient for flicking switches and turning knobs though!