Why same avionics in all planes?

Every stock aircraft and in the marketplace have the same Garmin G1000, G3000 or the usual GNS530 etc. Is it really hard to create a new avionics system like Aspen or is it because of licensing issues? Really tired of Garmin even if it works fine.

I’ve been wondering the same thing. Most King Airs are Collins ProLine

The newer PC-12’s either run Aspen’s cluster 3-screen setup or the full glass panels, they’re mighty pretty. But yea, you’re right, a G1000 or 3000 Garmin always seems to sneak in there. But then again, something something Asobo SDK something. I’ll keep optimistic devs are figuring out more options for avionics, just depends on how, “from scratch,” they want to start I guess.

Edit: I had the itch to look up Aspens 3-screen display and it’s called the Evolution Flight Display System, pretty sweet setup.

The CJ4 has a Collins ProLine system. Very nice with the Working Title CJ4 mod! After an initial flight yesterday and watching this tutorial video it jumped from a plane I disliked to one of my favorite planes in the sim… in one flight.

Yes, I really enjoy it. It has a unique feeling because of the Proline avionics. Once you learn how to use it, especially with the Navigraph integration, you don’t want to go back to the Garmin systems. This is my go to aircraft for IFR flying because of how well it works. And the VNAV functionality is pretty good!

I also enjoy the FBW A320 but it’s a little too much work to get it in the air when you mostly want to practice SID:s and STAR:s. The CJ4 is the perfect sweet spot between complexity and fun.

Yes. This is the most challenging part of the SDK, and it is new for MSFS so no easy conversions there.

It’s not the G3000. It’s a G3X. That’s why it lacks functionality. They put in what’s essentially a budget-friendly GPS for small single prop personal planes in what’s supposed to be a commercial transport aircraft.

While technically incorrect in that plane, a G3000 would functionally be much better.

Cool I didn’t know that! Do they sell the Kingair with the G3X? I’ve never seen one, I’ve only flown the Kingair with Proline 21. I really don’t like this enormous electronic standby instrument on the glareshield.

The G3X was probably a tactical decision since the cockpit itself was not rendered with any additional GTC keypads - which would have made it a better candidate for the G3000. No room for the Bezels for the G1000, so it came down to the last choice.

I don’t think they sell King Air with Garmins in general, but I could be mistaken. I don’t know a lot about that plane, so I would defer that question to someone more familiar with it.

The G3X is a lower cost GPS unit typically used in small, private / recreational planes. In the sim, you can find it in the X-Cub, VL3, Extra 300, and a couple of others. IRL, they’re pretty slim on features compared to higher end Garmins, but they don’t need to be because they’re far more basic and intended for smaller planes.

The King Air is a commercial aircraft. It’s not a personal / recreational plane. It would never have such “lite” avionics IRL. That’s why they normally come wiht the Collins - a top tier flight control system designed for commercial aviation. And that’s as it should be. The fact Asobo equipped the G3X into the King Air screams of them running out of time and having to launch the product, so they just shoehorned whatever they could in there as quickly as possible. That would also explain why most of the controls in the cockpit are INOP.

Do they sell the Kingair with the G3X? I

No. It is never sold with Garmin, not even as an option. It was formerly ProLine 21. Recent model years have been upgraded to ProLine Fusion.

There is an STC to re-kit with Garmin in the aftermarket side, bit I have no idea why anyone would want that.

The King Air is a commercial aircraft. It’s not a personal / recreational plane.

C90, B200, B300 type certificate fell under GA: 14 CFR Part 23. It’s not really a commercial plane, though i agree with you that they wanted pilots to feel like they were driving heavier metal.

Perhaps the best way to think about it would be to imagine it in a competitive landscape with business jets, but with propellers. Definitely GA variety.

Hmm are you sure? I have seen Garmin variants I believe, just not sure which Garmin system.

I have seen Garmin variants I believe, just not sure which Garmin system.

Yes. From a certification perspective, that was done aftermarket. Maybe someone paid a dealer to install STC. 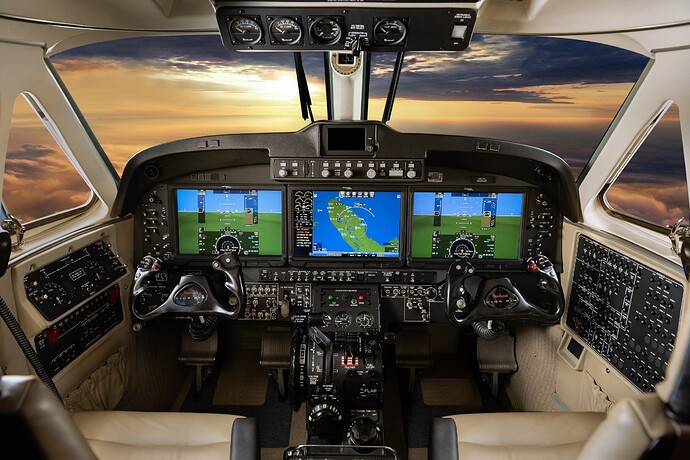 Never seen one in real life though, all the Kingairs I’ve flown had Proline 21.

Never seen one in real life though, all the Kingairs I’ve flown had Proline 21.

Absolutely they exist, but not out of production flight test.

My bad its proline fusion, it looks like Garmin

. Now I look at it more closely the symbology is Rockwell Collins indeed.

Why the heck did Asobo slap a Garmin G3 something in it?! Weird choice… I guess its too much effort to create the Pro-line fusion on top of the other avionics. Doesn’t the Asobo CJ4 have Proline 21 installed, could have copied that one over…

Yeah, with those big screens, they don’t look like how I remember anymore. After the Premier-style control wheels and the interior upgrade, to x50i marketing designations, the Fusion looks like Garmin G3something or other.

Why the heck did Asobo slap a Garmin G3 something in it?! Weird choice…

Yeah, I said the exact same thing in another closely related forum if you want to look there.

C90, B200, B300 type certificate fell under GA: 14 CFR Part 23. It’s not really a commercial plane, though i agree with you that they wanted pilots to feel like they were driving heavier metal.

Perhaps the best way to think about it would be to imagine it in a competitive landscape with business jets, but with propellers. Definitely GA variety.

Point taken. But I’d be willing to bet that despite its certification, most owners operate their King Airs in a commercial manner - either as transport for passengers (even in the role of a business jet) or perhaps cargo. I have no doubt some financially capable folks own and use them as personal aircraft as well, much like they do with jets. But I’d wager most are likely used for commercial purposes in some sort.

Even without that, this is not a class of aircraft you would put a basic avionics package like a G3X in, regardless who makes it. The equivalent of G1000 NXi, maybe. But more likely a system in the same class as G3000, like Collins Fusion variant posted above (which looks shockingly like a G3000 at first sight).