Won't start to download at all - Windows 10 Pro, Steam version

Developer mode is off.

I am trying to update MSFS2020 to the current version. Already downloaded the small file on Steam and started the Sim. It advances to the installation window, where it informs of a 40GB update and I can confirm the update. Then it displays the file name of the first package of 340 but won’t download anything, not one byte. Former World and Sim updates were without a hitch. My internet is with fiberoptic 20 Mbit download speed.

I already made some attempts to remedy this issue: restarting of the computer, disabling Firewall + Antivirus + Antimalware, Windows updates. I feel that I am out of more options. 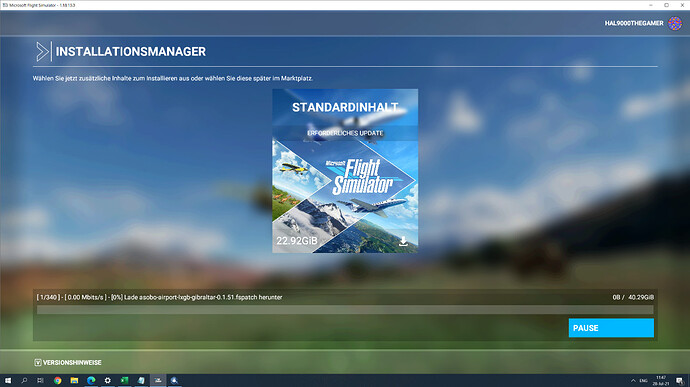 Exactly the same problem here. Tried countless times, tried a lot of suggested option like yours, nothing. I have steam version… tried Unisntalling and Reinstalling - same problem. The same screen you posted (after minutes) will end up with “Connection Lost - Please ensure you have an active Internet connection…etc.” . I have good connection at 150mbps.

I NEVER had any problems whatsoever in previous updates

This is getting very frustrating.
No other follow-ups on this topic??

With that broadband speed, is it worth just reinstalling the whole thing ? As you have found the install/update is a bit flakey at times.

I followed all the troubleshooting steps of this guide without success:

I recently bought Microsoft Flight Simulator via the Microsoft Store, and I have it in my account waiting to be installed. However, I can't install it. Every time I try, it returns the error 0x00000001. This is very frustrating because I...

The only thing that I did not do was to reset Windows.

In the end, today I uninstalled the game via Steam, deleted the previous Microsoft Flight Simulator folder in C:\Windows\Users\My username\AppData\Roaming and also the Packages folder on another drive.

Despite all this, a new installation once more advances to the MSFS2020 download manager page, where it continuously display package 1/353 downloading with 0.00Mbits/s with 0% advance.

Other software and Steam show a perfectly fine behaviour with downloads.

I am now in the hands of Zendesk support, which by the way didn’t answer my first request from july 28 either.

same here, i can get to about 10% max after it reboots the system and theres nothing you can do to stop it, osobo fix your ■■■■ before you release broken software that cause more problems than it fixes.
not impressed, if it keeps up ill just delete it permanently and play DCS instead it s way better anyway.

If Zendesk gets back to you, I appreciate if you could update us. We are having the same issue and I have given up on trying other options for the past 4 days!! I did almost all i can think of, including uninstalling, deleting the game folder in steam, reinstall, goes back to the same download page and not a single byte is downloaded, takes forever and ends up “connection lost”.

Judging on all my failed attempts to install the new version of Flightsimulator, I came across the former patch notes of version 1.7.14.0, where it states the following “The install process will no longer be blocked after a failed connection to servers”.
Find here the former patch notes, if you want to check: The latest patch is now available for download. To install the patch, simply close Microsoft Flight Simulator and relaunch. However, if you have experienced installation issues, we strongly advise you…

I would like to mention that when attempting to install the current version, I suffered dozens of crashes of Flightsimulator, which I noted in the end were caused by a tool called Process Lasso. So maybe this blcoking behaviour once more was in place and the many concurrent crashes could have triggered some automatic blocking from the servers towards my account/gamertag/etc., making it impossible to download anything until being effectively unblocked once more!?

As a sidenote, Netlimiter didn’t make a difference for the failing download.

Since I invested way more money into addons and supporting software than the actual cost of the Sim, I really see the possibity to purchase the sim once more, but on the Microsoft Store. One thing that bothers me is if my gamertag has been blocked for download, the new purchase from the Microsoft Store might be affected by the very same blocking!? Or would I need to create a new account for the Store to be sure? Or do I start being silly?

Finally got it reinstalled after it still shutting system down 5 or 6 times but at least this time it carried on from where it got too.
Latest hotfix seems to be a little better but it still crashes regularly but at least it’s kind of playable .

Mod edit: Some of the following posts were merged from other topics.

I can’t update or reinstall Flightsimulator 2020 (Windows 10 Pro, Steam). Every time the installation manager takes over the installation process, not one byte is being downloaded from the server(s). This was already reported to Zendesk but no solution or explanation was offered.

I have already tried a lot of things that are recommended in similar cases, nothing worked so far. As I see it, I have two options left: 1. Reset Windows. 2. Reinstall a clean version of Windows.

I have read about the Media Creation Tool from Microsoft and that it offers supposedly three options where one of the three allows to maintain apps (programs of any kind) and personal files.

Now to my question: Has anybody of you brave fellow MSFS2020 users resetted Windows 10 with this tool and maintained all installed software? Or what other hopefully positive experiences have you made with this tool to reset Windows 10 back?

Looking forward to read about your experiences or recomendations.

Mine is MS Store but I would go to:
Win 10 Settings
Apps
MS Flight Simulator
Uninstall

Then go to Steam and see if it will reinstall FS2020 for you.

On MS Store the Win 10 uninstall does not erase the additional 172 GB or so
and it it not be reinstalled by the download program.

Resetting Windows 10 with its “Reset” feature will break all non-MS-Store apps, requiring them all to be reinstalled:

You should think of it as renaming C:\Windows to a backup directory, and installing a fresh copy of Windows, with a fresh registry and configuration files. You may still have old app files in C:\Program Files but they won’t be hooked up to the system, won’t have any configuration or required libraries in C:\Windows\System32, etc.

The Media Creation Tool just downloads a Windows installer disk image and puts it onto a USB or DVD disk. This should be equivalent to installing either a fresh copy of Windows or an upgrade copy of Windows. As far as I know you can’t install the same version over an existing version, or downgrade, in-place without breaking the registry.

I could be wrong though, so someone please correct me if so !

This indicates an in-place upgrade on the same version might work. But it might also not help, if the problem is your configuration:

I already tried that, multiple times. Needless to say, without success.

There are many sites that explain how to reinstall/reset Windows while maintaining apps and files. I found this site just to show you that it should be possible.

This article will tell you when to reinstall your operating system and show you two methods to refresh Windows 10 without losing programs and files.

I just spent 2 weeks trying to get MSFS back. Until finally bit the bullet and reset windows 10.Yes I lost so many files,I am hoping to get back without buying again. Only then did MSFS and update 5 begin to install. It took me 4 days constantly nursing and restarting the downloader to get it installed. It then worked.
Good luck,I just don’t see any other way. I had no help from Asobo or MS store.

It is called Backup.

Reset Windows is very destructive. You must understand exactly what it does.
And its’ options.

Reset windows will keep your files.

But, will delete your apps. (Office, Google).

There is assistance from this Forum and other places.

Knowledge is crucial. Seek it before you wish you had.

To restore from a Backup will do nothing to get rid of “stuff” or “settings” that the Microsoft Installation Manager process disapproves.

Yep, I guess that will be also the final chapter for my attempts to get MSFS2020 running once more.

Uh…, the theoretical function of a backup is to get you back to a
point of correction (working correctly as desired)
(or as was previously content with).

Better to backup when it would serve as advantageous
(before you try something that may be harmful or hazardous).

Yes there is no other option. I tried everything bar buying an XBOX series X refurbished. I really just want MSFS in VR. Now the next dilemma is somehow avoiding another update that breaks it.

I apologize. My answer was a bit rushed. When you mentioned to use a Backup, I only thought of a recent backup, which most probably would not correct any issue with MSFS2020. I checked Acronis for the dates of my backups that I have available for drive C and the oldest one dates 8th of june 2021. If I remember correctly, World Update V was lanched after this date and that was updating without a hitch on my system.