Oh wow, that’s the default profile? That’s a very strange choice: that keybind turns VS mode on, and I assume it will spam that key, which might be what is confusing our AP. What happens if you unbind that? Does VS mode start to behave more sanely?

So what do you mean that they are not intended to be auto loaded?

I’m not sure of the reason behind the design choice, but MSFS’s bushtrip flights are intended to be hand-flown. The bushtrip plan does not automatically load into any avionics system in the sim. I understand that we were loading them before 0.5.0, but that was unintentional. The stock flight plan system will not load them into the plane avionics.

I’m not sure of the reason behind the design choice, but MSFS’s bushtrip flights are intended to be hand-flown

The idea is that you use visual clues only for navigation. You can use a ‘get me back on track’ function if you are lost, but you lose the achievement if you choose to do so. I guess a lot of people do not care about the achievements, in which case the lack of the flightplan can be a nuisance.

Comments like this are really just morale destroyers for developers. The reality here is that we could be doing all this development on our own, and nobody would get to use this, for many more months. But we don’t feel that’s the right approach, nor do we think that’s what the community wants. The community has asked for a long time to be involved in the development process.

Entirely understandable, and also the reason I posted a positive comment earlier that really didn’t serve much purpose except for highlighting that your work is very appreciated! And that is indeed important to highlight.

Threads like this one will easily get to the point where all bugs, imperfections and even misinterpreted features (such as NAV/GPS “not working”) gets highlighted and complained about – while everyone who is extremely happy with the progress are spending their time enjoying the mod and flying, rather than singing their praise here.

I think it’s safe to assume that a lot of people are thankful for the incredible work you’re putting in on improving not just the G1000, but the simulator as a whole, even though it’s hard to tell from reading comments in this thread.

Threads like this one will easily get to the point where all bugs, imperfections and even misinterpreted features (such as NAV/GPS “not working”) gets highlighted and complained about

Oh absolutely! And just to be clear, I really love good bug reports! That’s why we’re all here, to make this thing awesome together. So we don’t at all mind that this becomes a little one-sided. I was really only commenting on a specific and non-helpful kind of feedback.

However, given the recent tone of the thread, I just need to repeat: this is not a production ready system, this is an early access product.

My opinion is that the NXi - in any iteration released to date - is a game changer for MSFS. I have a grin on my face every time I enter a flight plan, and/or a procedure. The automatic loading of waypoints for Victor airways is far superior to what we’ve been using. In concert with a published approach plate, the NXi now allows you to correctly model real-world procedure. (Set ATC to ignore.)

With regard to the “recent tone” from a few people: those opinions - without any factual report about a specific problem - are simply noise. For those opinions I’d just slip on the noise cancelling headphones and press on regardless!

Thank you for all of your hard work. You have my gratitude and support.

FYI: I deleted button 20 and 21 from my Bravo profile. Did not help.

Or by dead reckoning using the autopilot.
The idea is that you read the leg description in the Navlog and try to find what is described by looking for it in the simworld, instead of simply following a flightpath loaded into the Garmins.
This is why the built in moving map is set to not follow nor display your position.
One is supposed to do it the old fashioned way: IFR (I follow roads).

I find the choice of aircraft in the bushtrips a bit strange for that at times. No one would fly in an aircraft with modern avionics and deciding to not use them. So for example in the Balkans trip it would have made much more sense to use the standard variant of the C172 instead of the G1000 version.

The first change from 0.3.0 that I encountered is in the “nearest airport” response field on the PFD. When at airfield KEB (Alaska) I pressed the ‘nearest’ softkey and the response did not include KEB !
In fact, it did not include any of the nearby unattended runways, such as PGM. The nearest airport was listed as PAHO (Homer) which was 22 miles away. It appears that maybe the criteria for inclusion on the ‘nearest’ list is to have an active COM tower. I’d like to hear from WT just what that criteria is.

Excellent work so far! Looking forward to even more imporvements

Two (for me) must have features that I can’t wait to see:

h wow, that’s the default profile? That’s a very strange choice: that keybind turns VS mode on, and I assume it will spam that key, which might be what is confusing our AP. What happens if you unbind that? Does VS mode start to behave more sanely?

First, I am only providing testing feedback, and not complaining. The NXi is my favorite part of MSFS.
Matt, that was a good catch. The Bravo Throttle Quadrant Button 20 is a rotary selector knob (not a continuous rate knob) but still it probably acts like one. It has positions for ALT, VS, HDG, CRS and IAS. Once a position is selected, the rotary knob on the right, Increase/Decrease changes the value for the selected mode. There are corresponding buttons on the Bravo Auto pilot panel to “enable the mode”.
The rotary selector button / increase/decrease rotary combination works on all modes except VS. That might mean something in the way the input is handled to you so I thought I would mention it.
With the 5.1 update, the VS feature on the Bravo Throttle Quadrant did not work and you mentioned I should be able to use the on screen buttons. I was fine with that. I know the NXI is a game changer and I am patient. BUT, things related to VS and ALT did not work… Could not hold an ALT, could not 'ride the glideslope" so ILS was out of the question… THEN you mentioned unmapping Button 20 (Rotary selection to AP VS HOLD toggle). I did that and now, using the on screen buttons for VS on and INC/DEC, everything works as it should. Set and ALT, VS to 400 and it climbs, captures and holds the ALT. ILS Glideslope is accurate right down to the touch down zone.
So… maybe a clue is in how the other features process input? In the C208, with today’s testing,
With IAS selected on the rotary knob, the INC/DEC knob sets the speed for FLC.
The CRS sets the Nav 1 or ILS CRS
Heading, you guessed it.
VS. Not currently working
ALT set controls the ALT SEL

I hope some part of this information is useful. Thanks for helping me get to a useable state with the setup I have. I got to explore and use the new version and there is no way I am reverting to default or an early version. I have faith that Bravo VS issue will get taken care of and happy with what I have. Matt, thanks for what you and all the wonderful people at WT do.

For me it is not the complexity of the latest mod but the fact it does not work with Bravo. I have tried every combination of versions I can but the NXi makes the Bravo unusable, I love the work being done and understand it is a beta and will be back after the next iteration, thanks so much.
EDIT just seen Lemit4001 comments and agree with them and I find it hard to pin point the reasons for this. I initially went through diagnostics on the Bravo hardware never believing WT could have done it but later after trying all options in aircraft that I know of I cleared community folder and put back G1000 early version. When they worked I went back to NXi and was back to the problem. Sorry if this is rambling on but I will wait eagerly thanks

I use the Bravo via spad.next for my bindings, and have noticed no particular problems so far.

I have not tried using APR mode yet (I’m doing VFR flights at the moment).

setting/changing the altitude target with the knob

That’s the one but that doesn’t work with my Logitech panels. The rest seem fine.

I use the Bravo via spad.next for my bindings, and have noticed no particular problems so far.

So did the Spad.Next come with Bravo Bindings? An you are using the NXi with the Spad? (cool)
Can you tell us what you have your "Toggle Autopilot VS Hold Set " and “Set Autpilot VS Hold” bings set to Please?

I’ve had success everything but the VS on the Bravo works like a top. I am using FLC now.

I have not changed any mappings (because if I go back 1 rev or go back to the original G1000) so the bindings are correct.

So did the Spad.Next come with Bravo Bindings?

No, I set them all manually.

An you are using the NXi with the Spad? (cool)

Yes, it works the same as the default G1000 or any other autopilot.

Can you tell us what you have your "Toggle Autopilot VS Hold Set " and “Set Autpilot VS Hold” bings set to Please?

I don’t know what those mean, but here’s the “VS” hold button: 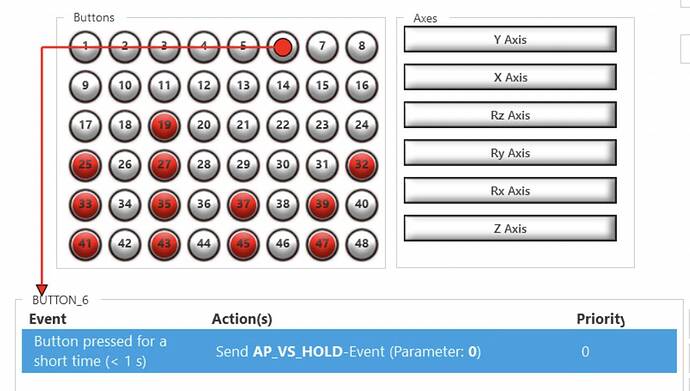 And the position on the selector knob for the VS selection: 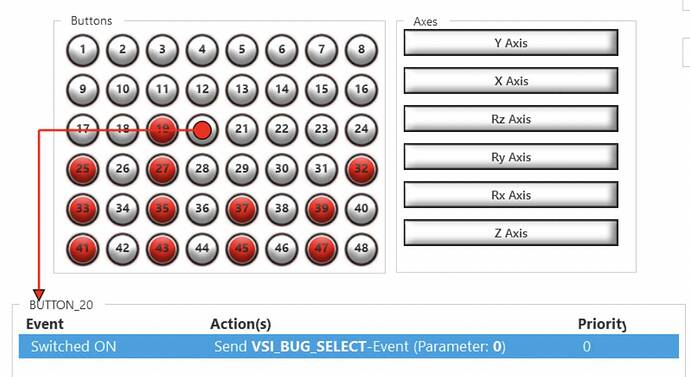