Feel free to post here about the new early access Working Title G1000 NXi that can be found on the Marketplace. I’ll keep this updated with the latest release notes and information. A reminder, since this is early access, you can expect missing features, bugs, or both! Please help us make the sim better by testing it out.

You can find us on our Discord at https://discord.gg/T6m24uz

The autopilot has been completely overhauled with 0.5.0, which includes some workarounds for altitude capture until such time that the sim supports the disabling of it’s own capture. This includes setting the altitude slot to slot 3 and setting the selected altitude to 99000 so it will never be captured, and using slot 1 as it should be for the preselector.

For hardware controls that control the altitude preselector, they must be configured to read and write to altitude slot 1, not altitude slot 0 (which really just reads/writes to them all, and will override all the custom AP altitude selections). If it is not possible to configure your hardware in this way, you will unfortunately have to either remove the hardware or remove the NXi. The are also third party softwares like AxisAndOhs, Mobiflight, and spad.Next that can allow you to bridge this gap if the manufacturer default software cannot.

We expect this workaround will no longer be necessary after Sim Update 6.

LOVE IT…that will be all…thank you

That’s a comprehensive update, looking forward for what will come in the future!

Question, is there a way to disable TAWS (bitchin’ Jim, “don’t sink”)?
Currently it seems to trigger at random takeoffs and landings for me, and won’t stop until well above 1000AGL

Sometimes the flight plan loading from the world map screen is loaded incompletely; this can usually be solved by restarting the flight - we are working on nailing this down.

Testing this new G1000, I see that it does not mark the distance between two points, could this error be what you mark?

By the way, enormous work that you do and thanks for sharing. 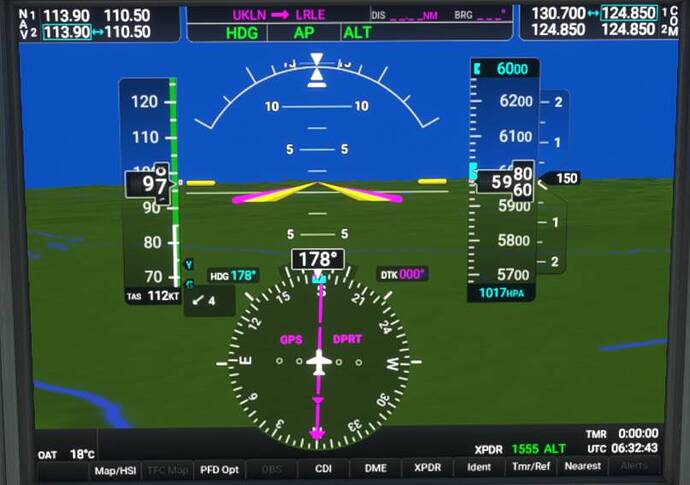 With the launch day version, I was unable to select the weather radar overlay. The NextRad button would click but not underline and no rain was showing on the map, despite it raining where I was currently flying.

Is this working yet with the latest update?

I see that key dimmed, at the moment it is not functional I think.

Does this mean the original WT G1000 we delete now, sorry if this is obvious

With the launch day version, I was unable to select the weather radar overlay.

NEXRAD display is not yet implemented. But definitely planned.

Does this mean the original WT G1000 we delete now

If you install this one from the marketplace, you should definitely delete the original WT G1000 mod.

Testing this new G1000, I see that it does not mark the distance between two points, could this error be what you mark?

I’m actually not totally sure what’s happening there. Would need to see more details about what was going on at the time.

Thank you Matt will delete.

NEXRAD display is not yet implemented. But definitely planned.

I use this function all the time with the original G1000 so will wait until you guys get it going before I try the NXi again. Thanks for the great work

Thanks for the update.
Is the timer implemented yet. Can’t start it.
Nice trap set by the way

Is the timer implemented yet. Can’t start it.

Timer is implemented, yep! I just tried it over here, just scroll to highlight the Start button and press enter. Both the up and down directions should be working.

Nice trap set by the way

Thanks! I actually built that kit myself, about 12 years ago. Great little jazz kit.

Is there still a conflict between this and PMS50’s GTN750?

this is amazing work, and I am over the moon exicted about the final product.

Until we add additional APIs to the sim (likely in SU6), other GPS systems will not really sync properly with the NXi. Given that we don’t use the sim flight plan system, I’m not totally sure how far we can go with compatibility. However, the goal is to eventually port this system into the sim, so all the avionics get the same ability to use the high quality vectorization and such.

We won’t make the NXi the default in the sim until such time that change has been made, though, so we don’t go breaking anyone who hasn’t opted in to that.

With the new NXi version installed the GTN 750 doesn’t show up in the panel as before if we have it installed also. Looks like the NXi takes priority over the GTN and I get the NXi on the C172 G1000 instead of the GTN. Please fix this. Didn’t have this problem with your first version.

Sorry, looks like I had to reboot the PC for it to work after reinstalling the NXi. It’s shows the GTN now.

Even though I have only flown one round trip flight in the Baron with the NXi since SU5, it was great!

Looking at this Garmin informational video I know I’ll be using the NXi more and more.

Thanks to Matt and the team at WT for the great work. You’ve changed my appreciation for glass panels!