In coordination with the release of Sim Update 4 today, we have released updated packages for the G1000, CJ4 and G3X. The G3000 remains compatible according to our testing, but there is a further update coming likely this week in case any feature bugs are detected by our users.

Working Title G3000 v0.7.1 - Working Title /G3000 - v0.7.1
–Compatible with Sim Update 4
–Added the ability to insert airways into flight plans.
–Added support for standby flight plans.
–Added the Flight Plan and Procedure Preview panes.
–Added the Flight Plan Text Inset window for the Navigation Map.
–For the Longitude: the GTC Flight Plan Keypad now supports direct entry of routes into flight plans (please refer to the changelog for the syntax).
–Fixed a bug where the GTC Flight Plan page would display a different active leg from the navigation map and PFD navigation status bar.
–The Flight Plan page should now report accurate leg-leg distances for all flight plan legs.
–The Back button now works properly in the Procedure Selection pages.
–The Waypoint Keyboard now provides accurate indications of when a match for the entered waypoint ident has been found.
–Fixed a graphical glitch affecting certain touchscreen buttons.
–The mod should now be better at “remembering” Navigraph account access and should not require account re-linking as frequently.
–Fixed a bug preventing the VFR Map from being moved when it was not detached to a separate window.

Did anything from the mods already made it’s way into the sim? I would suspect the delta to decrease over time?

Well I’ll be damned, that was fast

Thanks so much for the effort

A couple fresh updates. Thanks for your patience.

Nothing from the mods, per se, but we did contribute a number of items to the sim update. Tune in to the Dev Q&A tomorrow for more info.

Thanks for the good work, I’ll definitely tune in.

Does OBS work when tracking a GPS course?

This release fixes a compatibility issue with SU4 where approaches would not automatically activate. It also overhauls the GTC Direct To page and fixes a few other bugs. Please refer to the README.md and CHANGES.md files included in the zip file for more release information.

I was just in the TBM at PHNL to do some testing. I entered a direct-to route to see if I could enable the OBS feature (couldn’t). Then I chose the option to cancel the direct-to and got an immediate CTD.

Thank you! DL’d them right after installing SU4…

This is what I’m seeing on the MFD of the Caravan and 172. EDIT: it’s all aircraft that use the G1000. The map wont move/zoom, and all of the engine gauges are frozen/most off scale. 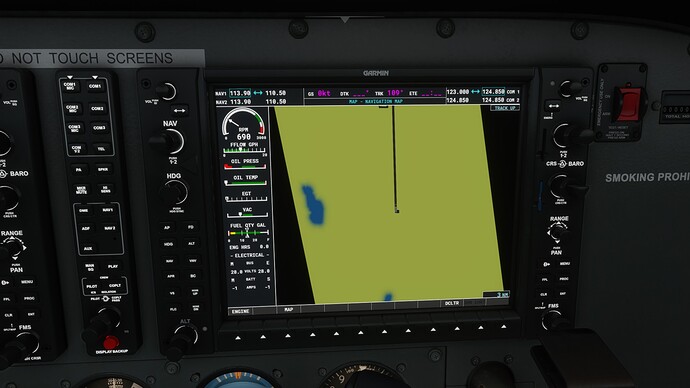 I only have the WT mods installed in the community folder at the moment. Have tried several times to D/L and install, thinking it was a just a glitch.

I’ve been using the WT G1000/G3000 mods for a long while now (Since November?), updating promptly, and this is the first time I’ve seen anything like this.

Any ideas? I’m thinking the only thing it could be is some file in the base MSFS update that got corrupted. But…if so, why does it work perfectly fine with the WT G1000 mod removed?

Well, same problem with me too.

I recommend reporting this to WT on their Discord Server, using the # garmin channel. You’ll get their eyes on it faster that way.

Did you manage to grab the new hotfix that just dropped right after; fixing this exact issue that was noted directly after the SU4 update?
Ensure that you are deleting the old mod completely beforehand. And also make sure you restart your sim after updating to SU4!

I’m assuming so - they show last updated nearly 10+ hours ago for me. And I’ve gotten into the habit of deleting the old folder, and copying in the new (to avoid any accidental remnants). I’ve also restarted the sim and computer numerous times.

The hotfix was released at 3:00pm EST - about 8-9 hours ago which was about 4 hours or so after the initial SU4 mod compat release.

You can also ensure you are receiving the most up to date packages by visiting their website: Working Title - Packages

Yes, that’s the one I’ve downloaded. I usually go to their github projects page (shows same info I think).

Ok, this is interesting!

Here’s how this happened, and how to fix it:

I had gone here (like normal for me) to get updates: GitHub - Working-Title-MSFS-Mods/fspackages: Working Title FS Packages

The GX shows v0.1.0-dev8 (hotfix version) but…actually (accidently) links to gx-v0.1.0-dev7. I had been installing the old version this whole time, unknowingly.

The wrong link is known. Should be fixed soon. For future reference, I would 100% recommend the website instead of github!

Agreed! Thanks for the help!