This is a Joke Microsoft, I wanted to buy some planes. But at least I told my self I would try the game first before buying. At the point this is a joke, until this is fixed I am going back to APEX. Fix your game and don’t release something that is broken.

PS: on Tuesday I was able to play with friends and didn’t change my server. I had no issues. This is a issue since getting on today.

Do you have any add-ons in your Community folder? If yes, please remove and retest before posting.
NO
Are you using Developer Mode or made changes in it?
Nope
Brief description of the issue:
At the top is all the info

Here you can see the server is on auto and when I change it back to Europe it changes back to east servers. 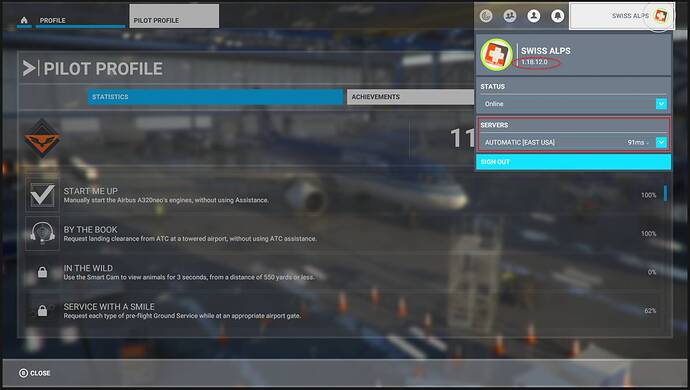 Loaded a Airport and pushed start and top right. Change the server back to Europe and (5-10 sec) changed back again to East coast.
Changed all settings to default.
From main menu Selected Europe and signed out. Signed back in and still east coast.
Force closed the game and started it again. Same issues as above.
Reset cache on the Xbox.
Deleted the 16GB of local data for the Flight Sim.
Deleted my profile saved file.
Rebooted the Xbox.
Did a hard Reboot of the xbox (Pulled power cord for 2 mins)
Deleted the whole game and removed my external hard drive to make sure full game is on Internal drive.
Re-installed 102GB of the game.
Check all my network settings and even changed DNS back to Google 8.8.8.8 . Everything came back as good.
Version: 1.18.12.0

I have Spent the last 4-5 hours troubleshooting this game in order to play with friends. This is a joke Microsoft.

PC specs for those who want to assist (if not entered in your profile)
Xbox Series X
Build Version # when you first started experiencing this issue:
N/A
Are you on the Steam or Microsoft Store version?
Xbox Store
Did you submit this to Zendesk? If so, what is your ticket #?
Nope

Looks like it working again. Nothing wrong with the client but problem with servers

glad to hear that. Enjoy your flights !

Hello. Im a actully having the same problem.
Im located In Japan , all was working good but after playing online in a group with European friends, the option settings was a mess: Servers setting back to Europe, impossible to set tome and weather etc… I heard in this forum that it’s a bug of friend groups. If you not leave the group in the option , the game will save your friends settings on your game.
Glad for you that it solved but not for me lol
Sorry for my english.
The game is incredible on Xbox. I wish less bugs and more fluid and easy UI. ( download contents system are messi too )

I have still the same problem on my pc.
When i set it to “Live” in 5 a 10 seconds it changed it back to 18 june 2018 on 18:09
I thought: lets check the servers…and yes same problem what you told me above, i cannot select a region server because it switched back. Therefor i cannot see any “live” activities of persons.
I have it since last update…frustrating.

This can happen if you were previously in a group. The fix is to create a group of your own by inviting someone from the player list or however, it doesn’t really matter. Once this is done a group will be created, and you can then leave it, and restore your game to properly live settings.

Oke, thx for the tip!
Yesterday late i had updates in marketplace, checked it today and everything works fine again.
Possible fix by the updates or your suggestion works

thanks a lot. that helps…

i also had this problem and i’ve been trying to fix it, but it doesn’t work

Make a group by inviting anyone, even a random. Leave the group.

Just click on someone in your lobby, should be the little people icon. invite someone. and then the leftmost icon is your group

yayyy thank you!! it really works, now the problem is solved

I have the same issue on XBOX Series X. After I joined a group and played on this evening I can’t set any weather or time/date. After some seconds all is set to this date/time from this group-game.

Because if that I can’t set liveweather oder manual date/time again in the world map. That means I can always fly (in my case) during the night in europe!

Please fix this problem with high prio, because the game is so nice, but this is a game breaking bug!

Make another group by inviting someone to a group. Can be Random from your lobby. Leave group. Voila.

This only give this problem to another player / friend. So this fix of course “my” problem but not solve the problem. Because the other player will stuck in this group with all my problems. No joke.

No they don’t need to join the group. Just inviting counts as forming one…

I’m having the same issue but reversed. I am in the US (East), grouped up with a guy from Europe and now I can’t access online and nothing I have done has fixed it. Simply changes itself back to Europe. What did you do to fix it or did it just fix itself?

If the poster is having the same issue I am having, that is not possible. I grouped with a guy from Europe earlier. Now I can’t access online features, cant change my ping back to East US and the weather is stuck on his custom settings. Wont even give me the option to leave his group.