Xbox One Controller On PC Not Vibrate After Last Update SU5

Asobo, I appreciate you trying to save the battery life on my controller…since you decided to botch up the vibration but seriously this could probably be resolved with a few lines of debugged code.

I was searching why vibration doesn’t work on my controller and, as many other things,… is because Asobo broken it.

Even with the latest update SU6 has not been fixed. But what the hell Asobo does it take the signature of the galactic president to fix such a simple thing. We just have to wait and hope for the next “Flight Simulator GOTY edition” update which should also integrate direct x 12.

really killing the immersion. Was so much nicer being able to feel the takeoff and touchdowns. I would definitely give back the new functionality to get back the vibration.
At least the vibration slider is still there.
Hope they get it fixed soon.

I can’t believe that vibration still not work with SU6. I’m quite sure that they will never fix this problem.
What a so unskilled developer! I have no idea why Microsoft selected this developer.

I opened another bug ticket Zendesk.

Any response from the community managers as to whether or not this issue is being addressed?

Or what needs to be done to get it addressed?

No updates with this? With SU5 we don’t have any fix… this is awesome…

Anything new on getting rumble feature working again.

They doesn’t care this problem anymore and never fix. As we expected, SU7 still not fixed it.

Yes, very disappointing. We just have to hope for the next SU8 (they said it will be dedicated only to bugs). For the moment we only have 33 votes if we don’t go up to at least 100 we don’t attract their attention.

Would you please fix the broken rumble feature already …don’t be an Asobo about it.

I have the same problem but I can’t vote

I just got it to work on steam version… I had to turn the controller on in steam settings… except it goes to sleep in seconds… I wonder if we can fake it with something like spadnext.

I just wanted to reinvigorate this thread because I seriously want the vibration back in my Xbox Elite II controller. I pretty much bought this controller for MSFS2020. It worked perfectly pre SU5. Since SU5 and even now - Post SU7, it still does not work at all. So it’s been broken now for around 8 months. I have opened 3 full tickets with Zendesk just to let everyone know I am doing my part. Can we please upvote my comments here so they fix it. Thank you!

Red Alert Update: Someone mentioned the controller settings in Steam and got it to work. I had doubts but went into Steam, right mouse clicked on MSFS, controller, controller general settings, and added all three Xbox Configuration Support, Xbox Extended Feature Support, and update the Driver for Xbox just for the driver(I am on a PC using Steam). After the driver update, you will only see the first two Xbox config and extended feature support. But wow! that actually worked! Granted, I only have vibration on the ground taxiing and taking off while on the ground and do not have the vibration during stalls like it did pre SU5. But I will take ground taxiing and taking off vibration over nothing any day. Also, if you have the Elite II Controller with Steam, believe it or not you will get RGB on the White Game home button. Mine changed color to light blue and I was amazed. Did some research and yes others have discovered the RGB same thing only on the Elite II though.

I haven’t spent enough time on it yet to determine if I still don’t have the vibrations on stalls, so it might work. I just don’t know yet. But all I got initially was taxiing and takeoff…which is awesome just for that.

Thanks, I followed your instruction and it works! Glad crisis is over! 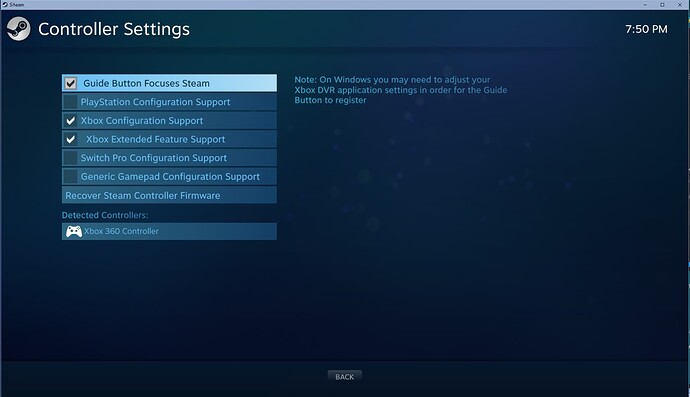 I found another point where you get vibration albeit it’s not recommended…lol. If you overstress and literally go into the red on the airspeed indicator, you’ll get some vibration. But I have everything always set to real, so clearly I won’t be overstressing very often. I also tried so many variations of the sensitivity on the controller, in Steam, and the sensitivity in MSFS and just cannot get the stall to vibrate like it use to, so that’s a bit of a bummer. But having it while on the ground sure helps to have something,

Guys great news finally after 6 months Asobo has fixed the vibration of the controller with SU8.